Stenger 'Providing Tremendous Value' On The Job At Resorts 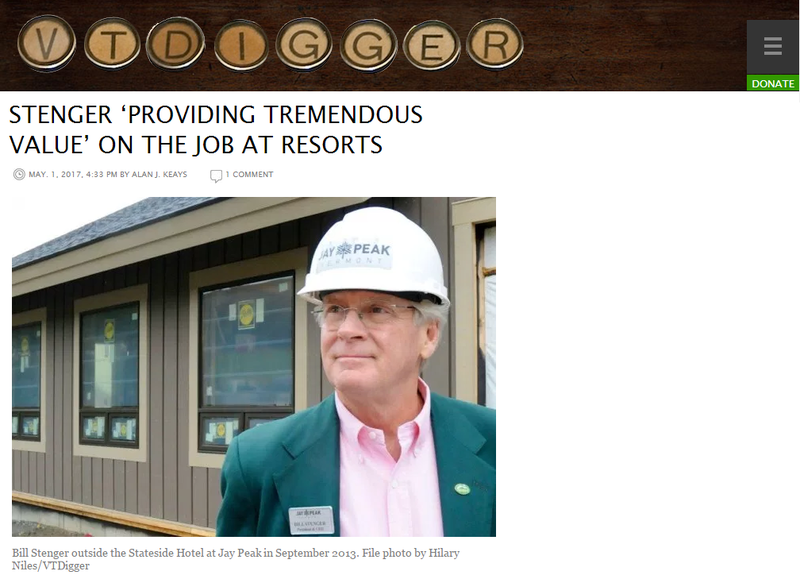 Bill Stenger, Jay Peak’s former CEO and president, remains a presence at the ski resorts in northern Vermont where regulators say he played a role in a “Ponzi-like” scheme to raise money for several massive development projects.

Michael Goldberg, the court-appointed receiver for both Jay Peak and Burke Mountain, said last week that Stenger is working for him on a consulting basis for about 10 to 15 hours a week at $50 an hour.

Currently, Stenger is helping with a project to install a new T-bar lift at Burke Mountain.

“I want him here because he’s helping out and he’s doing it cheaper and it’s in the best interest of everybody because he knows more about it than anybody,” Goldberg said. “It’s my decision. I am making the decision that it is in the best interests of this receiver estate that he assist in connection with overseeing the lift.”

The receiver did say he was surprised to hear that Stenger signed a document related to the project’s Act 250 permit application on behalf of the resort. He is also listed as the contact person.

“Bill shouldn’t be, he has no authority, he shouldn’t sign any document,” Goldberg said. “I can tell you straight out Bill Stenger shouldn’t be signing any official documents.”

Goldberg said he would look to replace the document with his own signature.

In addition to the $50 hourly rate, Stenger is allowed the use of an older model Volvo belonging to Jay Peak. “That’s part of his compensation,” Goldberg said. “He’s providing tremendous value to me at the resort.”

A settlement with the U.S. Securities and Exchange Commission bars Stenger from again participating in the federal EB-5 visa program for immigrant investors.

Regulators accuse Stenger and Ariel Quiros, the owner of Jay Peak and Burke Mountain resorts, of securities fraud in connection with a series of EB-5-funded projects. Those projects included major upgrades at Jay Peak and a new 116-room hotel and conference center at Burke.

Quiros and Stenger, regulators allege, misused $200 million of $350 million raised through the program, using a “Ponzi-like” scheme to take money raised for specific projects to pay for shortfalls in earlier ones.

Goldberg had previously described Quiros as the mastermind of the alleged investor fraud scheme, saying the Miami businessman had “duped” Stenger.

Stenger adamantly denied any culpability immediately after federal and state regulators brought civil charges against him in April 2016.

He reached a plea agreement with federal regulators in September to resolve the investor fraud allegations leveled at him by the SEC. The state case remains pending.

Violations alleged in the SEC complaint included diverting funds from one project to another, misstating revenue projections and failing to make required contributions to developments.

Under the agreement, Stenger cannot admit or deny allegations that he violated securities laws. He also agreed to cooperate with the SEC. He still faces the possibility of a civil monetary penalty based on his level of cooperation and ability to pay.

At the time the settlement was reached, Stenger issued a statement saying he would no longer be talking about the case to the press. “I want to focus my efforts fully to assist the Receiver and to help the investors,” he wrote in the statement.

Soon after, Goldberg posted a notice on the receivership website stating that Stenger would no longer work full time at the resort but would continue to provide assistance to the receiver on an “as-needed” basis.

Asked why Stenger wants to continue to work at the resorts, David Cleary, one of his attorneys, responded, “A) so that he has some employment, otherwise he wouldn’t, and b) he really believes in the area and those employees. He’ll do whatever he can to help them and make sure it’s a successful, now, pair of operations.”

Cleary added, “I know he puts in a ton of time that he’s not compensated.”

The attorney also said he has advised Stenger not to talk to the press.

“That’s consistent with what the SEC asked him to do,” Cleary said.