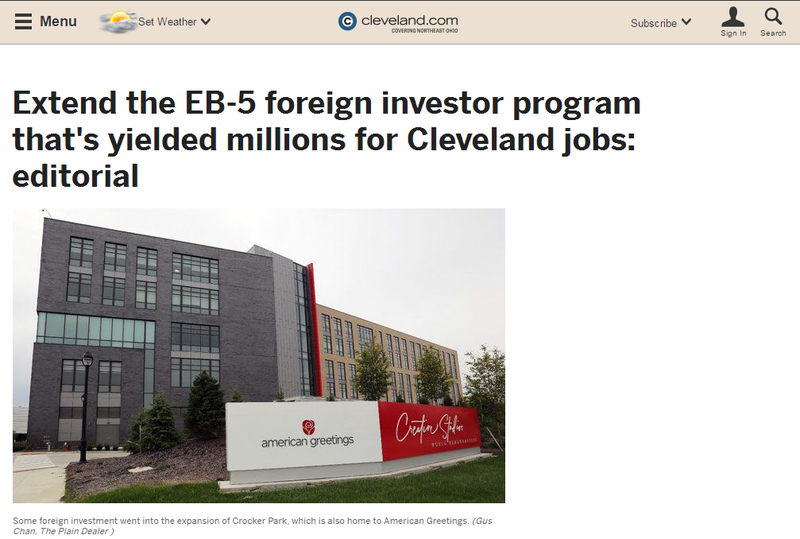 Congress must act quickly to save the EB-5 program, the golden goose that has encouraged foreign investors to plow hundreds of millions into major development projects in Cleveland, such as the Flats East Bank housing, retail and entertainment district.

Altogether, it's meant an estimated $225 million in Cleveland investments. That's a program worth preserving.

The EB-5 investor program, which bestows visas or green cards on rich immigrant investors and their families in return for creating U.S. jobs, is set to sunset on Friday unless Congress extends it. Lawmakers must do so -- after tightening rules that have allowed more affluent areas like Westlake to elbow in on a program originally designed to steer investment to rural areas and cities with high unemployment.

The federal program has been generating jobs for nearly two decades. Immigrant investors must fork over at least $500,000 for economic development projects in rural and depressed areas and pass a background check. A minimum $1 million is required for other areas.

One problem: The price of entry hasn't gone up. It should, via a gradual increase. The amount required now is roughly equivalent to a nice home in many places, making it highly attractive to investors. Another loophole: Because of loose and inconsistent oversight, developers have been able to make well-to-do areas look impoverished by adding high-unemployment census tracts, as was done with some money invested in the recent expansion of Crocker Park in Westlake.

That needs to change.

Still, the EB-5 program has been an economic engine in Greater Cleveland, helping to yield hotels, hospital expansions, grocery stores and other downtown renovations and jobs.

The project in deep-pocketed Westlake was able to qualify under terms aimed at high-poverty area areas because developers added poorer western Cleveland and Lorain census tracts to the project.

EB-5 and the Crocker Park expansion

Those flaws have some critics eager to see the program die on Friday.  That's not wise.

Congress should extend the immigrant investor program, forbid census tract gerrymandering, as it is called, and insist upon more transparency about job development, which has been a bit obscure.

With a backlog of applications, Congress should also increase the popular program's base investment to at least $700,000.

Fixes like these make eminent good sense; allowing this golden goose that has done so much for Greater Cleveland to die does not.