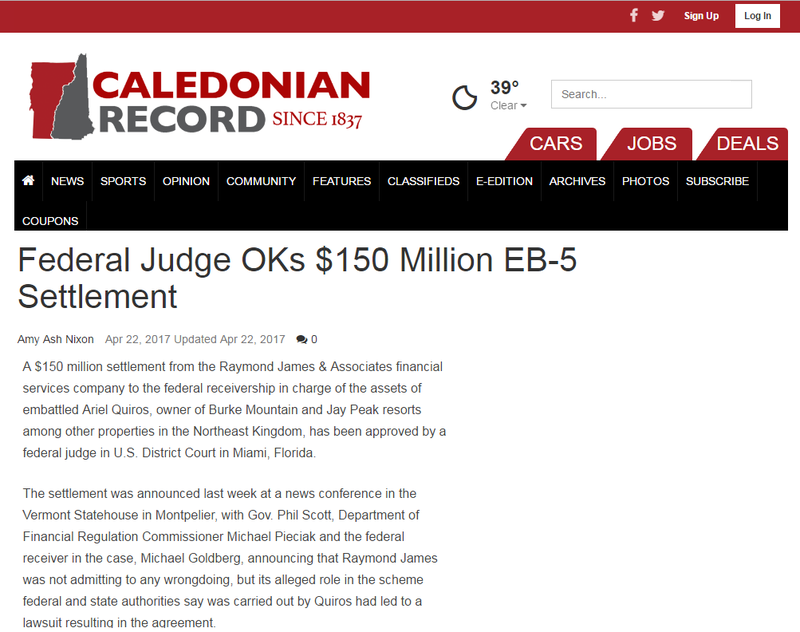 A $150 million settlement from the Raymond James & Associates financial services company to the federal receivership in charge of the assets of embattled Ariel Quiros, owner of Burke Mountain and Jay Peak resorts among other properties in the Northeast Kingdom, has been approved by a federal judge in U.S. District Court in Miami, Florida.

The settlement was announced last week at a news conference in the Vermont Statehouse in Montpelier, with Gov. Phil Scott, Department of Financial Regulation Commissioner Michael Pieciak and the federal receiver in the case, Michael Goldberg, announcing that Raymond James was not admitting to any wrongdoing, but its alleged role in the scheme federal and state authorities say was carried out by Quiros had led to a lawsuit resulting in the agreement.

On Friday, Goldberg said, “We are pleased that the court granted preliminary approval so quick and we are extremely optimistic we will ultimately receive final approval.”

“My lawyer and I have been working for nearly a year on this settlement and we truly believe it is an amazing settlement that is in the best interest of the creditors, investors, our employees, our customers, the Northeast Kingdom and the entire state of Vermont,” Goldberg said.

Goldberg said the company accepted its responsibility for what had allegedly occurred — Quiros’s former son-in-law was an employee at Raymond James — including the misappropriation of more than $200 million in immigrant investor funds in the EB-5 program.

The settlement has been given preliminary approval by U.S. District Judge Darrin P. Gayles, who wrote in his ruling late this week, “…(T)he Court preliminarily finds that the settlement is fair, adequate and reasonable, is a prudent exercise of the business judgment by the Receiver, and is the product of good faith, arm’s length and non-collusive negotiations between the Receiver and Raymond James.”

The final approval by the federal court will follow the terms of the settlement agreement, and a period of time during which those involved may contest the appeal, by June 5.

A final hearing date on the settlement has been set for June 30, the ruling states.

Through the EB-5 federal program, international investors can achieve permanent green cards for investments in economic development projects which lead to job creation or retention in economically distressed regions, such as Vermont’s Northeast Kingdom.

In the case of Quiros’s Northeast Kingdom Economic Development Initiative projects at Jay Peak, Burke and in Newport, the price of admission to the EB-5 opportunity was $500,000 plus fees of $50,000.

Quiros is accused of having used EB-5 funds from the previous owner of Jay Peak to buy the resort with, and is alleged to have begun the deceptive scheme on day one of owning the resort; the more than $20 million in funds that were misused from the outset, authorities, said, led to a growing appetite for a lavish lifestyle and the need to continually move funds across the many projects in the scheme to backfill missing money for earlier projects.

Investor complaints led to federal and state probes into the situation in Vermont, and the seizing of the two ski resorts last spring, including the changing of locks and shocking allegations coming forward.

In addition to being accused of allegedly misappropriating $200 million in investor funds, Quiros was also further charged with having pilfered another $55 million plus in investor money. His former business partner, Bill Stenger, was also implicated in the misappropriation allegations, but forensic accounting does not link him to having personally benefitted financially from what the Securities and Exchange Commission (SEC) and Vermont Attorney General say was an 8-year-long Ponzi-like scheme.

Stenger has reached a settlement with the SEC, but still faces a civil complaint by the state; he is cooperating with authorities, and working as a consultant for Goldberg, the federal receiver.

Quiros has denied wrongdoing, and is expected to stand trial in the fall of 2018.

This week, Melissa Visconti, Quiros’s new lawyer, said in an email, “We still aren’t saying too much because Mr. Quiros and the Jay Peak entities are still involved in active and ongoing litigation. However, we will now add that we and Mr. Quiros are well aware of the settlement with Raymond James. We are working cooperatively with the SEC and the Receiver and all other parties, and we are hopeful that the settlement and Mr. Quiros’ retention of new counsel are all positive steps toward resolution of the claims against him.”

The settlement Goldberg and his legal team struck with Raymond James, announced on the anniversary of the shocking allegations being made public last April 13 in the same room at the Statehouse means that investors will see tens of millions of dollars returned in just a few months’ time, and millions owed to contractors and vendors in Vermont and the region will soon be paid back fully.

There are still a number of legal claims the receivership is going after to try to bring in more funds to right the alleged wrongs of the former owner of the resorts.

The receivership is also at work defending the hundreds of allegedly defrauded investors, and $25 million of the Raymond James settlement is being set aside for their legal costs.