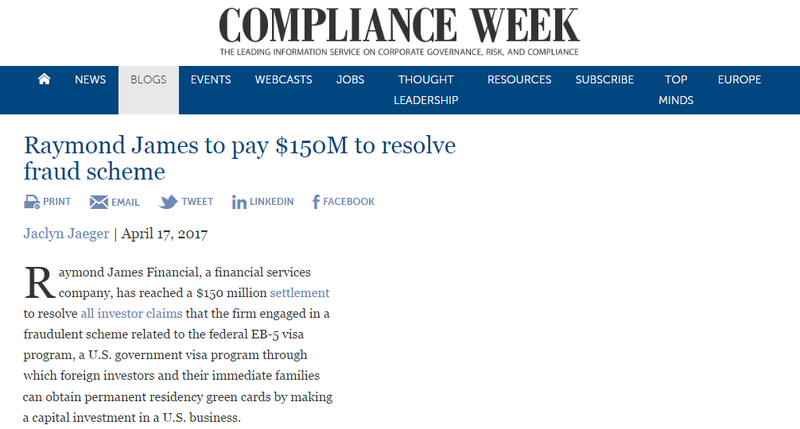 Raymond James Financial, a financial services company, has reached a $150 million settlement to resolve all investor claims that the firm engaged in a fraudulent scheme related to the federal EB-5 visa program, a U.S. government visa program through which foreign investors and their immediate families can obtain permanent residency green cards by making a capital investment in a U.S. business.

“We believe this resolution is fair and representative of our commitment to redressing the victims’ losses in this case,” Raymond James General Counsel Jonathan Santelli said in a statement. The settlement, reached April 13, must still be approved by the U.S. District Court for the Southern District of Florida.

In April 2016, the SEC announced fraud charges alleging that Ariel Quiros, owner of Q Resorts, and William Stenger, president and CEO of Jay Peak—a Vermont ski resort owned by Q Resorts—stole and misused millions of dollars raised through investments solicited under the EB-5 visa program. According to the SEC complaint, Quiros and Stenger made false statements and omitted key information while raising more than $350 million from investors to construct ski resort facilities and a biomedical research facility in Vermont. Investors were told they were investing in one of several projects connected to Jay Peak, and that their money would only be used to finance that specific project. Instead, “in Ponzi-like fashion,” the SEC said, “money from investors in later projects was misappropriated to fund deficits in earlier projects.”

More than $200 million was allegedly used for other-than-stated purposes, including $50 million spent on Quiros’s personal expenses and in other ways never disclosed to investors. Quiros improperly tapped investor funds for such things as the purchase of a luxury condominium, payment of his income taxes and other taxes unrelated to the investments, and acquisition of an unrelated ski resort, the SEC complaint stated.

Raymond James said it “did not act as placement agent or in any other capacity for the program, and none of the investors in the program purchased their investments through Raymond James.” The Raymond James financial advisor for the brokerage accounts of the related investment partnerships is no longer employed by the firm.

Additionally, Raymond James noted that its supervision program has undergone significant enhancements for a number of years now, including “considerable investment in its anti-money laundering (AML) control infrastructure including a substantial increase in AML associates, hiring a new chief AML officer with extensive experience, expanded training for all associates, and the integration of Mantas, a state-of-the-art transaction monitoring solution, to better detect suspicious activity.”