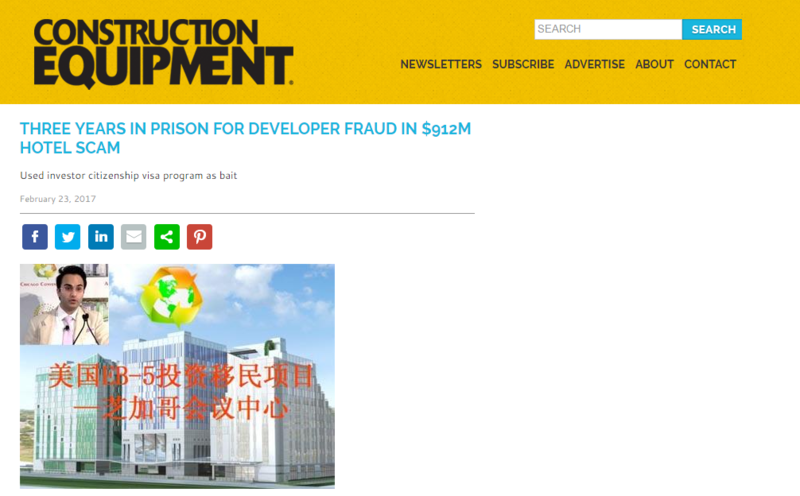 Anshoo R. Sethi has been sentenced to three years in prison for swindling 290 Chinese investors out of $160 million, using the U.S. government's EB-5 program as his means to defraud. U.S. District Judge John Lee also ordered Sethi to pay $8.8 million in restitution to investors.

The EB-5 program issues green cards to overseas investors who invest in qualified U.S. projects. EB-5 visas can be converted to permanent residency if the investment creates jobs in the U.S.

Sethi used forged documents and fake marketing materials to solicit investors for the proposed project, known as the Chicago Convention Center. The new facility was to be built on Higgins Road near O'Hare Airport and feature 995 hotel rooms, 290,000-square feet of convention space, an automatic robotic parking structure and miniature golf course on the roof.

Sethi pleaded guilty last year to one count of wire fraud. By dollar amount, it is the largest EB-5 criminal fraud case in the U.S. to date, prosecutors say.

The EB-5 visa program has received increased scrutiny from government watchdogs and lawmakers for its dubious record of job creation. Critics say the program, which began in 1990 as a way to stimulate the economy through foreign investment, is in practice just a way for wealthy Chinese citizens to become lawful permanent residents who later sponsor their family members for immigration to the U.S. In this case, the $900 million project never materialized, and no EB-5 visas were ever granted to investors.