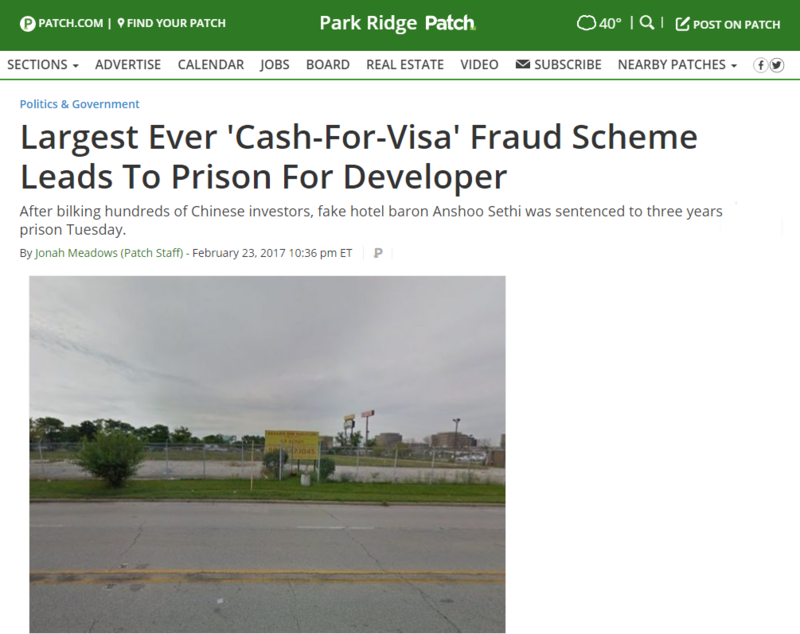 A would-be suburban hotel developer was sentenced to three years in prison and ordered to pay $8.84 million in restitution for exploiting immigration laws and fraudulently raising money from Chinese investors looking to gain U.S. residency, according to the Department of Justice.

Starting in 2011, Anshoo Sethi, 33, charged Chinese citizens more than half a million dollars each to invest in a project to build a 995-room hotel and convention center at 8201 W. Higgins Road, bordering Park Ridge near O'Hare International Airport.

The investors were willing to pay because of the promise of permanent residency in the U.S. through the EB-5 visa program, which offers expedited green cards to foreign investors.

Supporters say the program creates jobs and helps attract foreign capital, detractors suggest it is basically "selling visas to wealthy foreigners with no proven skills, paving the way for money laundering and compromising national security," according to Bloomberg news.

Sethi's case is the largest EB-5 criminal fraud case ever, according to the Justice Department.

“Overseas investors spent much time and energy making the difficult decision to invest in the Sethi project, and processing their visa applications – not knowing that the project was built on a bed of lies and forged documents.”

As part of his scheme, Sethi claimed he had relationships with large hotel chains and faked documents suggesting he had been approved for Tax Increment Financing from the City of Chicago.

The son of Indian immigrants, Sethi hired a clout-heavy team for his fraudulent scheme, according to the Sun-Times. He was represented in court by prominent defense attorney Sam Adam Jr.

He managed to raise approximately $158 million from more than 290 investors, according to the DOJ.

But Sethi never even started building the center.

He pleaded guilty last January and has repaid most of the money to investors.