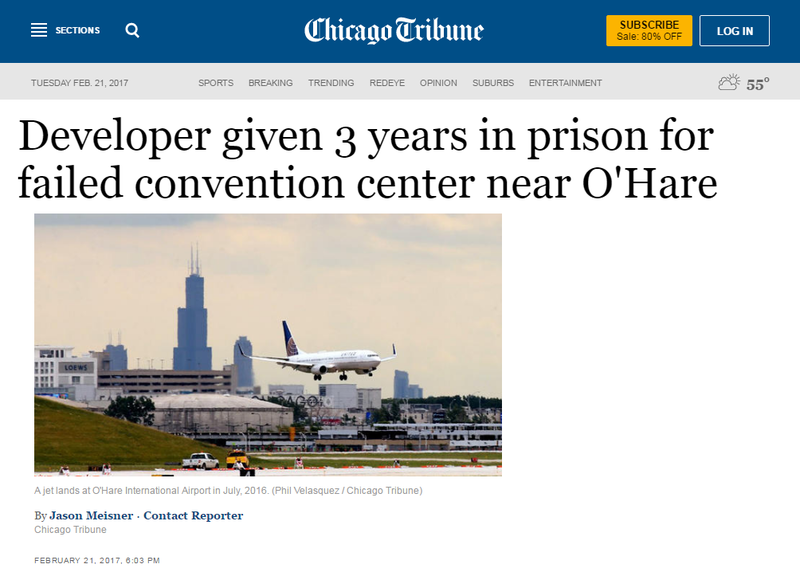 "You took advantage of hundreds of other people for your own personal gain," U.S. District Judge John Lee told Anshoo Sethi at the conclusion of a lengthy hearing that stretched over two days. In addition to the prison term, Lee ordered Sethi to pay $8.8 million in restitution to his victims

Sethi, 33, pleaded guilty in January 2016 to a wire fraud count alleging he lied to some 290 Chinese nationals, who bankrolled the mega-project through the government's much-maligned EB-5 program, which offers a path to U.S. residency for foreign investors.

To entice investors and keep the project going, Sethi produced slick videos and other promotional materials purporting he had the backing of major Illinois politicians, including then-Gov. Pat Quinn, according to court records.

Sethi misrepresented that he had sealed franchise agreements with established hotel brands like Hyatt and secured crucial tax increment finance funding and other investments from the city of Chicago. In one case, he even forged a city ordinance to make it look like the TIF funding was a done deal, records show.

He also vastly overstated his own background as a developer. In one brochure circulated in China, Sethi claimed 15 years of experience as a developer -- which would have meant he'd started when he was 14.

In reality, Sethi had virtually no experience with big real estate developments. The hotel project was soon beset by problems, and it was halted after the U.S. Securities and Exchange Commission filed suit against Sethi in 2013, records show.

Standing in court Tuesday dressed in a rumpled, cream-colored suit, Sethi showed no outward reaction when the sentence was handed down.

Court records show Sethi's parents lost nearly $11 million of their own money in the project, which was planned to be built on a three-acre parcel where the family's budget hotel once stood.

During the first day of the sentencing hearing last month, Sethi apologized to his victims and family, saying he had "no excuse" for his actions beyond blind ambition.

"I wanted to be successful like my father," Sethi said at the time.

Sethi's attorney, Patrick Collins, had asked for as little as three months in prison, saying that while Sethi was certainly naive and over-ambitious, he never used any of the investors' money for his own gain.

After the SEC filed suit, Sethi returned $146 million in principal investments to the victims -- money he had held in an escrow account, Collins said.

A little over $10 million was lost in payments to brokers as well as administrative fees – some of which Sethi spent on cosmetic surgery for his girlfriend and an astrologer, according to prosecutors.

Collins also said Sethi relied on the advice of unscrupulous "industry players" in the EB-5 program, many of whom "are on the fringe of legitimacy and are fraudsters" themselves.

But Assistant U.S. Attorney Sunil Harjani said the characterization of Sethi as naive and in-over-his-head was simplistic at best.

"He had a plan. He knew what he was doing," Harjani said. "He put his own ambition ahead of everybody else."