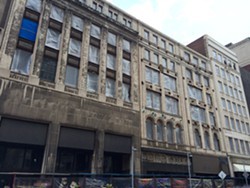 Euclid Avenue’s John Hartness Building has long been on the list of imminent luxury-hotel makeovers downtown. The 2010 out-of-state purchase of the complex was something of a downtown development bellwether — hospitality snazz promised amid the long-forsaken patches of blight along the Euclid corridor. The city rejoiced.

But as similar projects have risen up and cast a sparkling glimmer across Cleveland’s outward revitalization, the impending Le Meridien development at the JHB has been a vortex of legal wrangling and refinancing. Presently, project heads are lining up their plans to meet a Sept. 1 state deadline — the end-point of a fresh 90-day extension to close on financing the project and activate $11 million in preservation tax credits first allocated to the project eight years ago.

The team behind the hotel project is coming out of a legal settlement — one brought on by seven eastside residents who had raised nearly $1 million for the project four years ago and who were becoming concerned with their investment.

But that’s just a small portion of the overall cost of this thing. The development team is presently seeking a $36 million loan. Another $10 million is expected to come from the buzzworthy EB-5 U.S. visa investment program. In short, as part of that program, 20 overseas investors would put up a combined $10 million and promise to “create” 10 new jobs through their investment.

For now, we’ll wait for the tax credit deadline to arrive.

We’ll also wonder aloud whether the context of the Le Meridien project has changed at all. Is Cleveland — the quickly evolving U.S. city du jour, and our home — different than it was in 2010? Should the state be contorting itself to extend tax credit privileges for massive upscale hotel projects in downtown Cleveland?

Tourism rates are up, yes, but as of March 2015, according to the Downtown Cleveland Alliance, hotel occupancy downtown sits at 67 percent (more or less in line with 2014’s average).

To get back to the simpler numbers at play, the Le Meridien hotel is expected to include 206 rooms. Its opening date is set nebulously for “2017.”