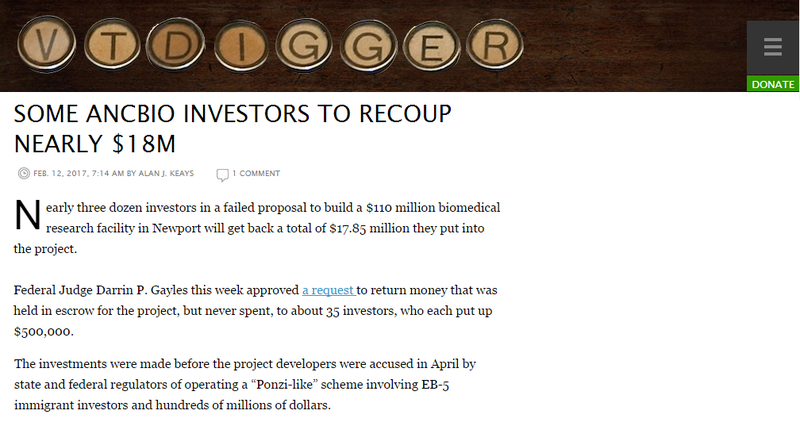 Nearly three dozen investors in a failed proposal to build a $110 million biomedical research facility in Newport will get back a total of $17.85 million they put into the project.

Federal Judge Darrin P. Gayles this week approved a request to return money that was held in escrow for the project, but never spent, to about 35 investors, who each put up $500,000.

The investments were made before the project developers were accused in April by state and federal regulators of operating a “Ponzi-like” scheme involving EB-5 immigrant investors and hundreds of millions of dollars.

“Based on the Receiver’s representation,“ the judge wrote in his ruling, “the Court finds that the (biomedical project) will not be completed in a manner that is consistent with the underlying subscription agreements.”

The proposed biomedical research center, according to court records, is about $43 million short of what would be required to complete it. It would be “nearly impossible” and “inconceivable” for the facility ever to be completed, the filing added.

Another 133 EB-5 investors who put a total of $66.5 million into the project before the state required the developers to hold funds in escrow accounts are not included in the ruling.

The investors who are covered put in money after March 2015, when the state added the escrow requirement. For several months prior, the state prohibited the developers from seeking investor funds for the project.

That’s because questions began to be raised about its connections with an affiliated company in Seoul, which in May 2014 had to sell its headquarters to cover debts.

Michael Goldberg, the court-appointed receiver now overseeing the escrow accounts following state and federal investor fraud lawsuits against the developers, asked the judge last month to return the money to the investors.

Those initiatives included a massive redevelopment of Jay Peak as well as other projects in Vermont’s Northeast Kingdom.

The biomedical research center project was among the last headed by the two men over eight years.

For an investment of at least $500,000 in a qualified project, EB-investors become eligible for permanent U.S. citizenship if job creation requirements.

Few investors in the AnCBio have met the criteria since the project was never completed and few jobs could be tied to it.

Goldberg has said previously that AnC Bio Vermont created enough jobs to meet the requirements for only about 30 of the 168 total EB-5 investors in the project.