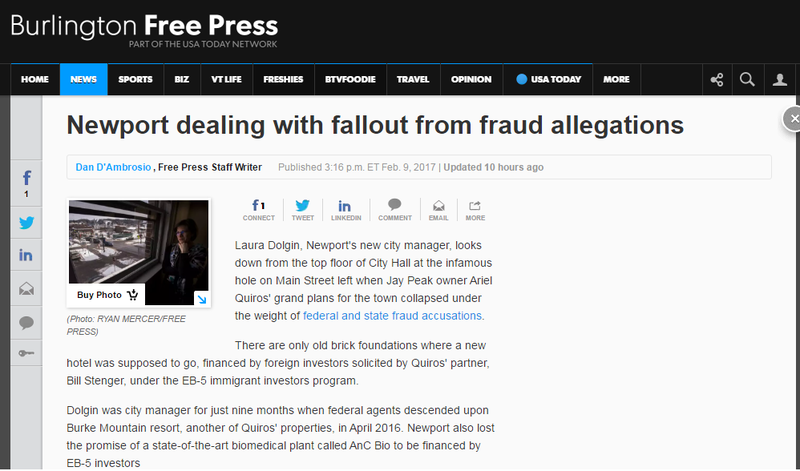 Laura Dolgin, Newport's new city manager, looks down from the top floor of City Hall at the infamous hole on Main Street left when Jay Peak owner Ariel Quiros' grand plans for the town collapsed under the weight of federal and state fraud accusations.

There are only old brick foundations where a new hotel was supposed to go, financed by foreign investors solicited by Quiros' partner, Bill Stenger, under the EB-5 immigrant investors program.

Dolgin was city manager for just nine months when federal agents descended upon Burke Mountain resort, another of Quiros' properties, in April 2016. Newport also lost the promise of a state-of-the-art biomedical plant called AnC Bio to be financed by EB-5 investors

Quiros has denied the federal charges, Stenger has settled his case with the U.S. Securities and Exchange commission.

"When the story first broke there was a lot of surprise, disappointment and shock and some people were very satisfied, because there's that perspective," Dolgin said. "There was a lot of unknown and misunderstanding about what this truly meant for the city. We had to do some research so we could explain to the residents of the city exactly what it did mean."

Michael Goldberg, the man overseeing the management of the EB-5 properties, says the Newport lot could be sold in six or seven months.

"Stenger had a very good track record, so our municipal planning really embraced these opportunities," Dolgin said. "The city put a lot of emotional support behind them, thinking this was going to drive the future of the city."

Steve Breault, owner of the 30-year-old Newport Natural Market and Cafe, across Main Street from the hole, didn't bite on the dream.

"I've been here before there was ever an EB-5 program," Breault said. "I never heard of EB-5 until the whole thing fell apart, then I read the headlines. It was never part of my business plan."

Breault said it was "not great" to have vacant space across the street, but what was there before — a labyrinth of decrepit buildings — was "even worse."

"I don't want to sound cynical, but I'll believe things when I see them," he said.

Across the street, Mike Desautels, owner of a new UPS Store, did believe in the dream. He located his store next to the undeveloped land instead of near the new Walmart in Derby, a few miles down the road.

"Whether I'm here or on the Derby Road doesn't matter much, but I figured with the hotel being there and the biotech plant it would be a good spot," Desautels said, laughing.

Now he wants to move out by Walmart, but it will cost him.

Meanwhile, local artists have decorated the chain link fence surrounding the hole with colorful murals, and Dolgin has a $20,000 grant from the state to help her figure out what to do next. She put out a request for proposals from real estate consultants, due next week.

"I've got my fingers crossed," Dolgin said. "I think (the proposals) will help the city corral a realistic opportunity."