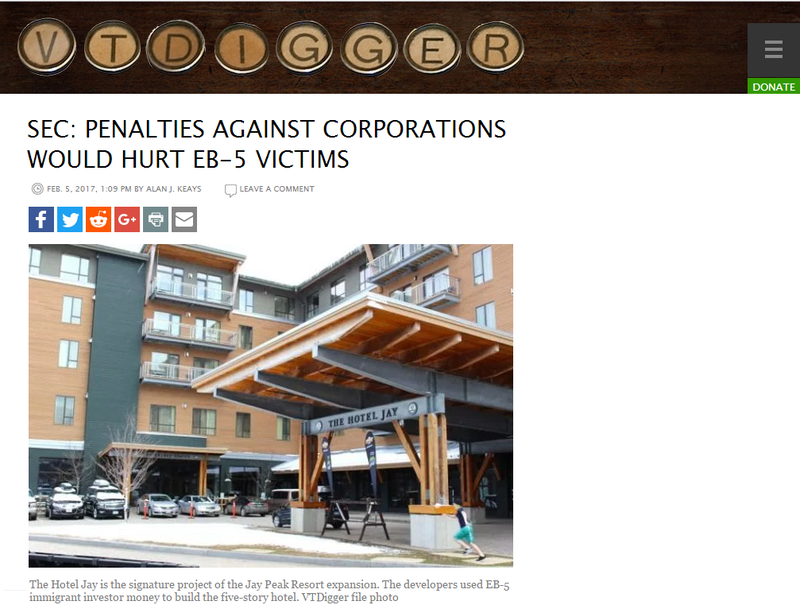 Federal regulators say that to protect assets and help investors recoup millions lost in Jay Peak developments, they won’t ask for any penalties against entities now overseen by a court-appointed receiver.

Attorneys for the U.S. Securities and Exchange Commission filed a notice last week dismissing its claims for disgorgement, prejudgment interest on disgorgement and civil penalties against a slew of corporate and relief defendants.

Those defendants were recipients of money raised through the EB-5 investment program, which Jay Peak owner Ariel Quiros and former president and CEO Bill Stenger used to pull in money for projects in the Northeast Kingdom.

“The Commission files this notice of dismissal because all of these entities are now under the control of the Court-appointed Receiver, who is marshaling their assets for the benefit of investors,” SEC attorney Robert K. Levenson wrote in the filing.

Stenger and Quiros are accused of misusing $200 million of the more than $350 million raised through the federal EB-5 immigrant investor program meant for a series of expansion projects at Jay Peak, as well as separate developments in Burke and Newport.

Most of the corporate entities named in the case brought by the SEC in April were under the control of either Stenger or Quiros. The corporations include North East Contract Services Inc., which had been headed by William Kelly, a longtime business associate of Quiros.

However, all those entities are now overseen by Michael Goldberg, a court-appointed receiver. As the receiver, Goldberg has oversight over all the relief and corporate defendants, and in that role consented last month to judgment against them in the SEC lawsuit.

Penalties against those entities, including disgorgement of any ill-gotten gains, were left to be determined at a later time by the SEC and the federal judge presiding in the case in Miami, which is where Quiros lives and many of the corporations are based.

The EB-5-funded developments headed by Quiros and Stenger over an eight-year span included a $110 million biomedical research center in Newport, called AnC Bio Vermont, which never materialized. Kelly was paid $7.9 million for services he allegedly provided for that project.

Relief defendants are entities that have received “ill-gotten gains,” though they may not have taken actions that led to the fraud allegations.

The corporate defendants include six limited partnerships formed to raise money for the Jay Peak projects as well as for AnC Bio Vermont.

Quiros, who has denied wrongdoing, is the only defendant remaining in the SEC case. Stenger settled with the SEC in September. He agreed to cooperate with investigators and faces a possible civil penalty. A state lawsuit alleging fraud remains pending against both Stenger and Quiros.