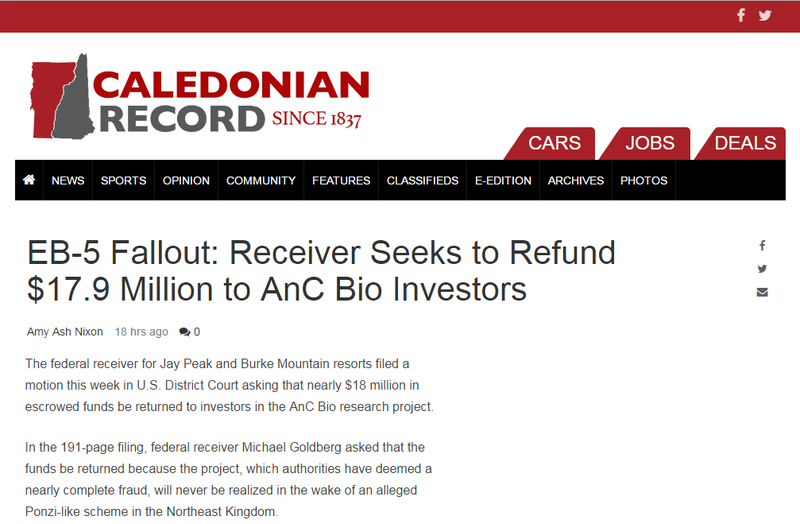 The federal receiver for Jay Peak and Burke Mountain resorts filed a motion this week in U.S. District Court asking that nearly $18 million in escrowed funds be returned to investors in the AnC Bio research project.

In the 191-page filing, federal receiver Michael Goldberg asked that the funds be returned because the project, which authorities have deemed a nearly complete fraud, will never be realized in the wake of an alleged Ponzi-like scheme in the Northeast Kingdom.

Authorities from the federal Securities and Exchange Commission and the Vermont Attorney General in April brought forward allegations that Ariel Quiros Sr., the owner of the projects under the Northeast Kingdom Economic Development Initiative, and his former business partner, Bill Stenger, had allegedly misappropriated more than $200 million in immigrant investor funds. Quiros was further charged with taking another $55 million plus of investor funds for personal use.

Stenger has reached a settlement with the SEC and is cooperating against his former partner. Quiros is expected to stand trial in U.S. District Court in Miami later this year.

Goldberg has control over the funds in escrow as the receiver in charge of all the assets connected with Quiros’s assets. He has been working since April to right the assets, protect the interests of employees, investors and creditors, as well as the towns in which the properties are located which are owed back tax dollars.

In the court motion filed Friday in Florida, Goldberg states that the funds from investors in “Phase VII” of the project, or Jay Peak Biomedical, have been held in escrow at People’s United Bank in Burlington, Vermont.

Each investor in that phase of the project put up $500,000 in the federal EB-5 program through which immigrant investors can secure permanent green cards when it is substantiated that jobs have been created or retained in economically distressed regions such as Vermont’s Northeast Kingdom.

Investors also paid a $50,000 administrative fee to participate in the project, the court record shows.

The Escrow Agreement permits investors to seek a refund of his or her minimum $10,000 deposit for the first 30 days, the court filing shows, and after that time, “No other right of refund or procedure to secure a refund is set forth in the Escrow Agreement.”

“Each Phase VII investor for whom refund authorization is being requested has a pending I-526 petition that has not been approved. However, it is inconceivable that the Jay Peak Biomedical project will be realized in the manner represented to the Phase VII investors in the Subscription Agreement or the business plan on file with USCIS,” the motion reads. “Accordingly, unless Congress amends the existing EB-5 laws, it is doubtful that any of the Phase VII investors who do not yet have conditional residence will be approved by USCIS.”

Goldberg is asking Judge Gayles to grant him an order permitting him to refund the money in escrow to the Phase VII investors, the motion states.

Much of the 191-page motion filed seeking the refund order is background in the complex legal case.

Goldberg states in the recent motion that refunding the investor funds in the biomedical project is a “prudent exercise,” his authority and judgment as receiver.

He goes on to state, “The receiver cannot guarantee a positive outcome for the Phase VII investors.”

In his role as receiver in the case, Goldberg has, he notes in the motion, “provided comments on pending legislation designed to preserve an EB-5 investor’s status in the event of fraud,” and worked to reallocate the Phase VII investors to other Jay Peak projects to try to preserve their investments. Goldberg writes that he also “explored plans to realize an alternative version of the originally-proposed project. However, none of these actions can guarantee that a Phase VII investor will be successful in the immigration process.”

Goldberg argues, “Through no fault of the Phase VII investors, the Jay Peak Biomedical Project cannot be realized in its current form.”

“…Phase VII is $43 million short of funds that would be required to complete the project and none of the initial steps required, e.g., FDA approval of the purported biomedical technology associated with this project, have been undertaken,” writes Goldberg.

Investors who receive refunds will give up any claims against the receivership or third parties in connection with their investment to the receiver, the motion stipulates.