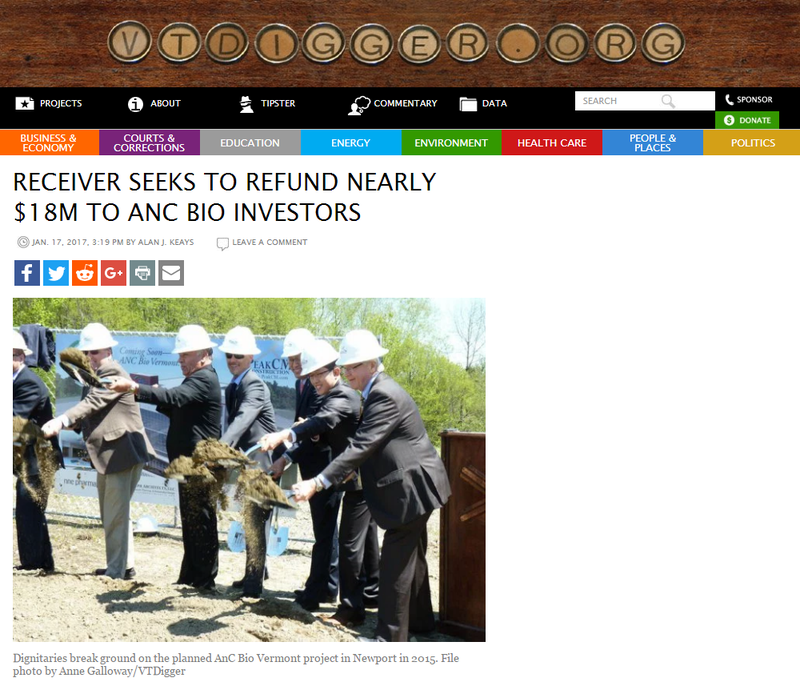 About 35 investors who each put up $500,000 to help fund a proposed $110 million biomedical research facility in Newport that was never built may soon get their money back.

Michael Goldberg, the court-appointed receiver overseeing the properties at the center of a massive fraud case involving the research facility and other developments, has asked a judge to allow him to offer refunds to investors in AnC Bio Vermont whose money was placed in escrow.

The filing last week states that $17.85 million remains in escrow accounts at People’s United Bank in Burlington, representing the investments of “approximately 35” investors.

The proposed biomedical research center, according to the motion, is about $43 million short of what would be required to complete it, and it would be “nearly impossible” and “inconceivable” for the facility ever to be completed.

That lawsuit, as well as one brought by state regulators, alleges that in total, the developers misappropriated $200 million of the more than $350 million raised over eight years for the series of projects in Vermont’s Northeast Kingdom. Those projects included expansion at Jay Peak, adding hotels and a water park.

The judge in the federal case appointed Goldberg in April as the receiver for the properties and other assets associated with the fraud allegations, granting him authority to oversee Jay Peak and Burke ski resorts as well as the bank accounts of AnC Bio Vermont.

The developers referred to the biomedical research center as the “crown jewel” of their Northeast Kingdom development initiatives. Also known as Phase VII, it was among the last of the projects proposed before regulators said the “Ponzi-like” investment scheme began to collapse. 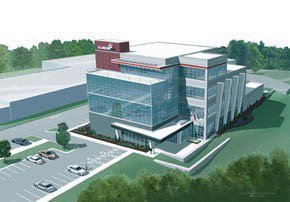 The proposed AnC Bio plant that was to be built in Newport.

The money for the projects was raised through the federal EB-5 immigrant investment program. That program calls for foreigners to put at least $500,000, plus a $50,000 administrative fee, into a qualified project. If that investment leads to the creation of 10 American jobs, that investor becomes eligible for permanent U.S. residency.

However, most of the investors in AnC Bio Vermont will not be able to meet the program’s job creation requirement, despite initial claims from the developer that as many as 3,000 jobs could be credited to the project’s direct and indirect economic impact.

“Accordingly,” the receiver wrote, “unless Congress amends the existing EB-5 laws, it is doubtful that any of the Phase VII investors who do not yet have conditional residence will be approved” by U.S. Citizenship and Immigration Services.

Efforts have been underway in Congress and through rule changes by the U.S. Department of Homeland Security, which oversees USCIS, to provide relief to EB-5 investors who, through fraudulent activities, have no ability to achieve the program’s job creation requirements.

So far those reform efforts in Congress, despite the support of Vermont Sen. Patrick Leahy, have stalled. There is some hope that the new Congress seated in January may be more receptive to the proposed changes.

However, it’s unclear how President-elect Donald Trump, who has pledged to increase deportations, would view any changes to the EB-5 program.

“The Receiver has advised these investors that he is optimistic that Congress may soon amend current EB-5 law to provide relief for investors defrauded in EB-5 projects, including AnC Bio,” Surgeon wrote in his motion, “and that if these investors elect to receive the return of their funds in escrow they most likely will be ineligible for such relief and lose any ‘grandfather’ status they have under the EB-5 visa program.”

The filing adds, “Nevertheless, the Receiver expects many of the investors whose funds are in escrow may desire to receive their escrowed funds and attempt to find another EB-5 project in which to invest.”

AnC Bio Vermont had been facing scrutiny well before the lawsuits were filed in April.

State officials, from August 2014 to March 2015, prohibited the developers from seeking investor funds for the AnC Bio Vermont project following questions about its connections with an affiliated company in Seoul. In May 2014 that company had to sell its headquarters at auction to satisfy creditors.

The state, in giving partial approval to restart the AnC Bio Vermont project in March 2015, imposed a condition that any new investment needed to be placed in escrow.

Before the state added the escrow provision, 133 EB-5 investors each put $500,000 into AnC Bio Vermont, for a total of $66.5 million. That’s in addition to the investments from the roughly 35 whose money went into escrow.

Goldberg has said previously that AnC Bio Vermont created enough jobs to meet the requirements for only about 30 of the 168 total EB-5 investors in the project. 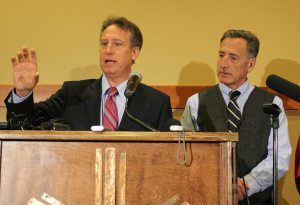 Michael Goldberg, left, the receiver for the Jay Peak and Burke ski areas, and Gov. Peter Shumlin at an April press conference at Jay Peak Resort.

The developers held a ceremonial groundbreaking for the 85,000-square-foot biotech facility in May 2015, which was followed by initial preparation of the site before the project ground to a halt.

Since that time, the state and federal investor fraud lawsuits leveled against Quiros and Stenger say, they did “virtually nothing to obtain” approval from the U.S. Food and Drug Administration for the research center’s products.

Also, Alex Choi, the CEO of the AnC Bio parent company in South Korea and a longtime business partner of Quiros, faces prosecution in that country for allegedly embezzling $10 million.

“Although most of the Phase VII investors’ money was removed from escrow, as of the commencement of the receivership, there was $17,858,484.30 still being held in escrow,” Surgeon wrote in his recent filing. “These funds have remained in escrow throughout the receivership.”

Quiros denies any wrongdoing and is challenging both the state and federal lawsuits. Stenger has settled his federal case, but the state one remains pending.

The federal case, brought by the U.S. Securities and Exchange Commission, is pending in federal court in Miami, where Quiros resides and many of his business entities are based.

The federal judge in Miami in November approved a preliminary injunction continuing a freeze on Quiros’ assets while the case remains pending. A temporary injunction had been in place freezing his assets since shortly after the lawsuit was filed in April.

The granting of the preliminary injunction extends Goldberg’s receivership. Since that ruling, Goldberg has exerted more authority over the assets, including agreeing to a settlement with the SEC for the many corporate and relief defendants he oversees in the case.