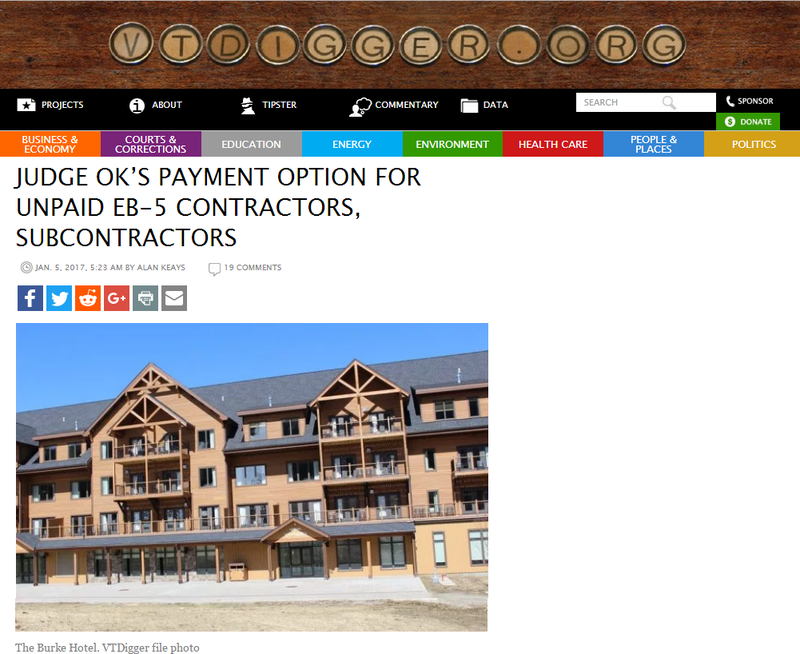 Many of the contractors and subcontractors owed money for their work on EB-5 funded developments projects in Vermont’s Northeast Kingdom will soon have a decision to make about how they will start getting paid.

Michael Goldberg, the court-appointed receiver overseeing the properties following allegations of massive fraud against project developers in April, filed a motion Tuesday laying out the plan to start paying contractors and subcontractors some of the money they are owed. Judge Darrin P. Gayles approved it late Wednesday afternoon.

The companies can opt to get paid for 33 percent of what they are owed, and hope they will be made whole in the future with proceeds from the sale of the property where they performed work. Or, according to the filing, they can take a onetime 60 percent payment now of their total bill, and write off the other 40 percent.

The filing adds, “In the event too large a number of contractors elect Option 2, and the Receiver determines that it is not prudent to expend such a large amount of cash at this time, the Receiver intends to pay any contractors he deems advisable pursuant to Option 1.”

The lack of payment has hit many of the subcontractors hard, forcing some to lay off employees, take out loans, and extend lines of credit. Goldberg has repeatedly said previously that he expected the initial payments to the contractors and subcontractors to be in the 30 percent to 40 percent range of their total amount owed.

Shortly after the filing of the judge’s order, Vermont Gov.-elect Phil Scott issued a statement saying he was pleased with news of the payment plan for the contractors and subcontractors.

“This progress is a welcome step toward ensuring small businesses are compensated for the work they provided as fairly, and as quickly, as possible,” Scott, a Republican, said.

He added, “As governor, I will work closely with our Department of Financial Regulation and all involved in this matter to continue to help the community and affected businesses and families rebuild.”

The payment plan is for the more than 30 companies that worked on the Burke Mountain Hotel and Conference Center, which opened in September, and a condo village at Jay Peak, called Stateside, which is incomplete because the developers, Ariel Quiros and Bill Stenger, ran out of money.

Goldberg wrote in his filing that contractors and subcontractors who worked on a proposed $110 million biomedical center in Newport, AnCBio Vermont, are not included in this round of payments. Only site work for that project took place. Federal regulators later said the project was “nearly a complete fraud.”

Contractors and subcontractors for that project are owed more than $2 million, court records state.

“At this point in time, the Receiver does not yet know what he will do with the AnC Project, and ultimately, he may determine that allowing the contractors to foreclose their lien rights is in the investors’ best interests,” Goldberg wrote. “Therefore, at this time the Receiver does not want to use his limited cash to pay the AnC Contractors.”

Rob Conrad, owner of Conrad Construction in Derby, said Wednesday he hasn’t decided which option he will take. He is owed $245,237 for siding and roofing work at the Burke hotel.

“I don’t know yet, it’s too early to tell. I’ll have to get some advice,” Conrad said. “I really haven’t had time to digest it.”

Sandy Fead, PeakCM’s attorney, said Wednesday he hasn’t yet had time to talk to his client, Jerry Davis, the company’s president.

“We’re happy to see that there will be some cash available to contractors and subcontractors,” Fead said. “Each of them will have to think about which approach will be better for them. This approach does give them a possibility to cash out and move on.”

According to court records filed in the case, PeakCM is owed $3,919,903, which includes $3,699,121 due to the subcontractors for their work building the Burke Mountain Hotel and Conference Center.

In addition to the general contractors choosing one of Goldberg’s options, the subcontractors will have the same choice.

The money to start paying the contractors and subcontractors will come from the proceeds of an $13.3 million settlement Goldberg reached with Citibank, a financial institution used by one of the developers, Jay Peak’s owner Ariel Quiros. The settlement resolved a dispute between Goldberg and Citibank over a line of credit and which entity was entitled to the assets Quiros put up as collateral.

Quiros, who owned Jay Peak, and Bill Stenger, the resort’s former CEO and president, raised money through the federal EB-5 immigrant investor program to fund their series of projects over an eight-year span. Those projects include the ones that left the contractors and subcontractors with the unpaid bills.

Federal and state lawsuits against the two developers allege they misused $200 million of $350 million raised from EB-5 investors for seven out of projects, not including the Burke ski area. Those investors each put up $500,000, plus an administrative fee in a qualified project. If that investment leads to the creation of 10 jobs, the investor becomes eligible for permanent U.S.residency.

Goldberg’s payment plan was filed in federal court in Miami, which is where Quiros lives and many of his businesses are located. Gayles, the presiding judge, issued a three-page order approving the use of the Citibank settlement funds for the payments.

“Although the Citibank Settlement Proceeds are significant, the Receiver still lacks the necessary funds to pay all contractors, trade creditors and other creditors in full,” Goldberg wrote. “Moreover, the Receiver needs to utilize a significant portion of the Citibank Settlement Proceeds to supplement the Jay Peak Resort and Burke Hotel’s operations and pay for the administrative expenses of the receivership.” 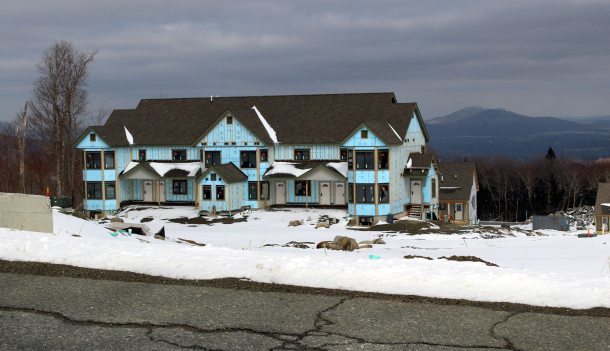 In addition to paying the contractors and aiding in the running of the resorts, the Citibank settlement funds are expected to help pay the roughly $2.5 million in back taxes owed to the towns where the properties are located, Burke, Jay and Newport.

Also, Gayles last month approved Goldberg’s request to use $1.9 million of the settlement funds to pay the attorneys, accountants and other professionals who have worked for the receivership since the filing of the state and federal investor fraud lawsuits in April through Oct. 31.

Goldberg cited the complex nature of the case, the largest EB-5 alleged fraud case in the program’s history, for his fee request. He added that about $600,000 of that total went to accounting fees to help untangle the intricate web of transfers that occurred as part of the alleged “Ponzi-like” scheme.

For the contractor and subcontractors weighing the two payment options, Goldberg wrote in the filing that he doesn’t know how much the Stateside condo village or Burke hotel will eventually sell for.

“Importantly,” he wrote,”there is no guarantee that the Stateside Contractors or the Burke Contractors will ever be paid in full as the Receiver cannot guaranty that the net sales proceeds will be enough to satisfy their liens when the properties are eventually sold.”

The Citibank settlement proceeds do not provide any funds for investors.

Then he added, “Finally, equity itself dictates that the ‘mom and pop’ contractors who helped build these properties should be paid first.”