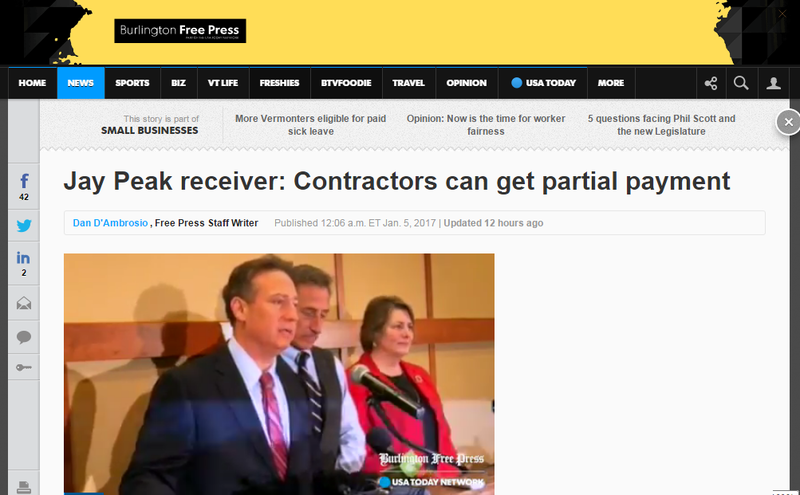 The receiver for Jay Peak Resort will offer partial payment to contractors left with unpaid bills in the wake of one of the biggest cases involving fraud allegations in the history of the federal EB-5 program.

In a motion filed this week in federal court in Miami, and approved Wednesday, Michael Goldberg told the court he would offer contractors two choices: Take a 33 percent payment and receive the balance owed when the properties sell, or take a 60 percent payment of the amount owed as payment in full.

The EB-5 program offers green cards to foreigners who invest $500,000 in development projects in economically depressed areas of the country that create a minimum of 10 jobs per investment.

Phil Scott, who takes office Thursday as Vermont governor, said in a statement Wednesday he was pleased with the court's decision to allow the partial payments.

"This progress is a welcome step towards ensuring small businesses are compensated for the work they provided as fairly, and as quickly, as possible," Scott said.

In his motion, Goldberg stated he reserves the right to require certain contractors to accept the first option of partial payment if too many elect the second option of payment in full, "which may require too much cash."

The money for the payments will come from a $13.3 million settlement Goldberg reached with Citibank in September for the role he said that company played in the fraud.

Former Jay Peak owner Ariel Quiros and President and CEO Bill Stenger were accused in April by the U.S. Securities and Exchange Commission and the Vermont Department of Financial Regulation of misappropriating $200 million raised from foreign investors for Jay Peak and other projects in the Northeast Kingdom. Of that total, the SEC accused Quiros of taking $50 million for himself.

Stenger entered into a settlement with the SEC in September, while Quiros continues to deny wrongdoing. The allegations are civil, but federal prosecutors in Vermont say a criminal probe is ongoing.

Goldberg said Citibank extended in March a $15 million personal line of credit to Quiros, who used collateral accounts to secure the credit line and improperly diverted investor funds from those accounts.

Citibank did not admit wrongdoing and said Quiros has failed to pay back the line of credit.