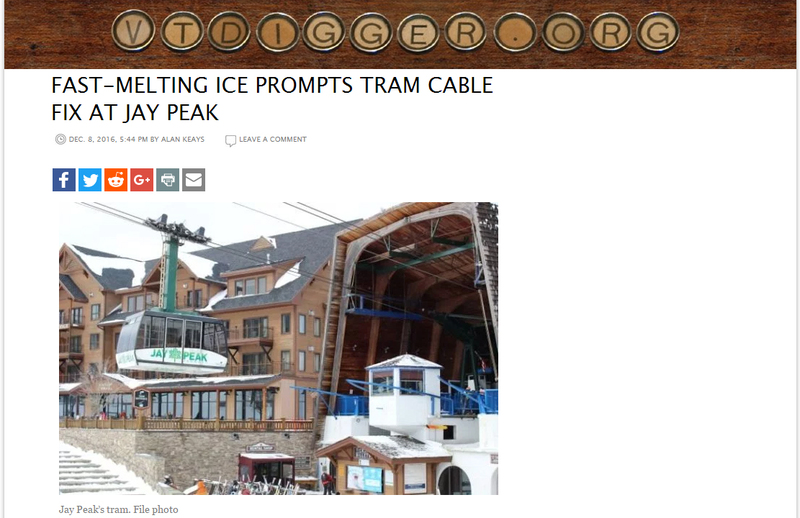 Though the resort has begun its ski season with other lifts, the tram is not set to start up until the week of Dec. 19, said Jay Peak’s Steve Wright.

Workers are fixing one of the tram’s cables this week after ice weighed it down and then melted quickly, causing it to bounce back into place with so much force it got wrapped around another cable, Wright said.

Ice tends to build up on the cables every year during November and December due to temperature fluctuations, the general manager said. Normally the cables come back into place slowly as the ice melts little by little, he said.

“There are multiple cables up there,” Wright said, “so when this cable weighed itself down, when it came back up into place, it did it with enough velocity that it wrapped itself around another cable.”

The incident happened last week, and a crew of workers who specialize in such fixes arrived at the resort late this week to make the repair, which is estimated to take a couple of days, Wright said.

“All you do is loop it back over itself,” he said, “but it needs to be done slowly.”

Wright said such mishaps occur with trams, including this one, with the last time about 12 to 15 years ago.

He wasn’t sure of the cost of the fix but said it would come from a budgeted contingency account set aside for such equipment repairs.

The tram was shut down at the end of the ski season last spring. That’s when state officials said it needed about $5 million in repairs.

In June, a federal judge overseeing an investor fraud case against Ariel Quiros, the resort’s owner, approved a $5 million contract with Dopplemayer/Graventis to manufacture and install parts for a new electrical system for the tram.

The state determined the tram could operate in the interim.

Jay Peak is currently overseen by a receivership. It was put place in April shortly after the state of Vermont and the Securities and Exchange Commission filed lawsuits alleging investor fraud against Quiros and Bill Stenger, Jay Peak’s former CEO.

The SEC alleged the two men operated a “Ponzi-like” scheme, misappropriating about $200 million out of about $350 million they raised from immigrant investors through the EB-5 visa program. The money was meant for development projects, including several at Jay Peak.

A federal judge froze all of Quiros’ assets, and court-appointed receiver Michael Goldberg was put in charge of their operations.

“Although Quiros was aware of the necessary tram repairs, he failed to set aside money to pay for them,” Goldberg wrote in a recent report to investors on the status of the properties that are part of the receivership.