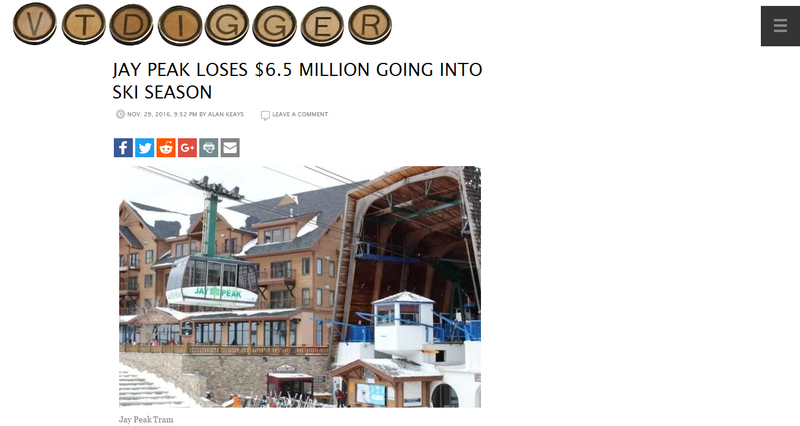 A lack of cash reserves carried over from last ski season by the resort’s owner, who now faces fraud allegations, is one of the main reason for the shortfall, he added.

“From May through December, the ‘off season,’ the resort loses money,” Michael Goldberg, the court-appointed receiver, wrote in a filing last week. “Cash flow projections indicate that the Jay Peak resort will lose approximately $6.5 million this off-season.”

Goldberg included news of the shortfall in a report he wrote to investors, which provided an update on the properties he has overseen since April, when civil fraud cases were brought against Jay Peak’s owner, Ariel Quiros, and William Stenger, the resort’s former CEO.

“Typically, a prudent operator will build up cash during season to be able to get through the off season,” Goldberg added in the report. “However, such was not the case with the Jay Peak and the Receivership Entities accounts did not contain sufficient cash upon the commencement of the receivership to fund this shortfall because Quiros wrongfully diverted millions of dollars.”

The cost of repairing and maintaining the Tram at the resort compounded the problem, the report states. “Although Quiros was aware of the necessary Tram repairs, he failed to set aside money to pay for them,” Goldberg wrote.

The tram was shut down at the end of the ski season this spring when state officials said that it needed about $5 million in repairs. In June, a federal judge overseeing the fraud case against Quiros approved a $5 million contract with Dopplemayer/Graventis to manufacture and install parts for a new electrical system for the Tram. The state determined that the Tram could operate in the interim.

Money from a recently approved $13.3 million settlement between the receiver and Citibank is expected to offset some of the shortfall. The settlement stemmed from a dispute over a line of credit Quiros took out from the financial institution in 2015.

The Associated Press reports that ski pass sales at Jay Peak are down by 8 percent this year.

In the report and prior interviews Goldberg has said a portion of the proceeds from that settlement will go for operating expenses as Jay Peak.

The receiver wrote in the report that “with this infusion of capital” he is confident that Jay Peak will stay operating until it can be sold to recoup money for those who are owed, including the contractors and investors.

A more precise breakdown of the Citibank funds is expected to be filed in court soon seeking the judge’s approval.

The report filed last week also stated that the resort’s water park, known as the Pump House, is in need of repairs to the “duct sock system,” described as “the hanging system that suspends the large fabric air ducts from the ceiling of the water park.”

The cost of the repairs, which have been scheduled, is estimated at $350,000. Goldberg wrote there may be a way to recoup that money with claims against the architects, engineers and contractors who designed and built the system. He added in the report that he put them on notice he intends to pursue those claims “in due time.”

The lawsuit’s claim the two men operated a “Ponzi-like” scheme, to attract investors and fund projects. The U.S. Securities and Exchange Commission, which brought federal lawsuit, also stated Quiros siphoned off some investor money for personal expenses, including the purchase of a $2 million condo in Trump Tower in New York City.

Quiros has challenged the claims and the cases against him remain pending. A judge hearing the federal lawsuit in Miami last week did grant a preliminary injunction the SEC had been seeking against Quiros, freezing his assets and requiring him to no longer take part in the EB-5 program.

Stenger settled his case with the SEC and the state lawsuit against him remains pending.