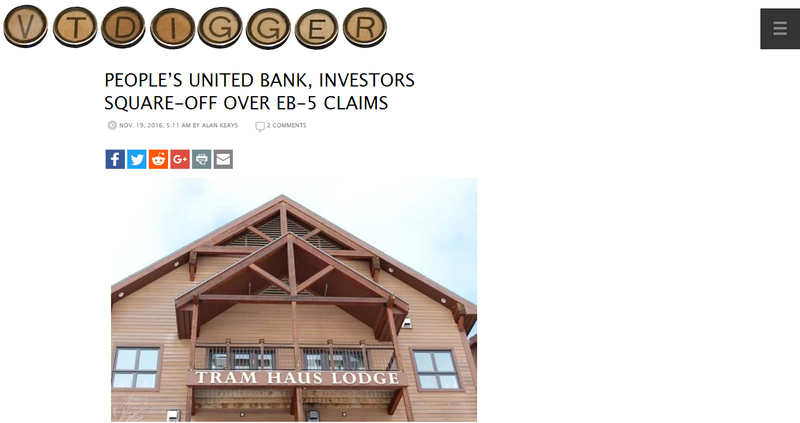 A federal judge has been asked to decide whether People’s United Bank should be dropped from a class-action lawsuit brought by EB-5 immigrant investors in the Jay Peak projects.

The investors allege People’s played a role in a scheme to defraud them.

The lawsuit, led by Brazilian investor Alexander Daccache, accuses several parties, including the bank, of improperly using hundreds of millions of dollars in investor funds meant to pay for developments at Jay Peak and Burke Mountain ski resorts, as well as projects in Newport.

A legal back-and-forth has been underway in the case pending in federal court in Miami between the attorneys for the bank and lawyers for the investors.

The dispute centers on claims that the bank took part in an alleged Ponzi scheme by the developers of the projects, Ariel Quiros, owner of Q Resorts, a holding company that includes Jay Peak, and William Stenger, the resort’s former CEO, who are also named as defendants.

“People’s Bank transferred investors’ escrow funds in flagrant violation of the terms of the offering documents and escrow agreements, and in doing so, breached its agreements as well as fiduciary duties it owed to the investors,” Thomas Tucker Ronzetti, an attorney for the investors, wrote in a motion opposing the bank’s bid to be dismissed from the case.

The attorney later added, “People’s Bank was a substantial and active participant in a massive fraud that caused millions of dollars in damages to Plaintiffs and the Class.”

Attorneys for People’s United Bank have contested the allegations, raising several arguments to back their request to dismiss the bank from the case.

The arguments range from the claims taking place outside the statute of limitations, to challenging the jurisdiction of the filing of the lawsuit in Florida, to disputing that officials at the bank knew of the alleged scheme.

“Plaintiffs have not alleged facts to support any inference that People’s had actual knowledge of the alleged wrongdoing by others,” Jonathan Minsker, an attorney for People’s United Bank, wrote in a motion filed this month.

“Rather,” Minsker added, “at most, plaintiffs have alleged conduct that, as plaintiffs themselves describe it, were supposedly ‘red flags’ of potential misconduct, which is wholly insufficient to state a claim against People’s.”

Attorneys for the investors allege that People’s improperly managed funds from escrow accounts. The lawsuit claims that the developers moved money designated for specific projects to accounts at a Raymond James brokerage firm branch in Florida belonging to another phase of the development.

The lawsuit alleges the bank knew the actions were “improper.”

“The significant number of transfers in and out of the People’s Bank escrow accounts to effect commingling of partnership funds, and transfers of funds to a non-bank, alerted People’s Bank to illegal conduct in the administration and use of investor funds,” Ronzetti wrote.

In contesting the jurisdiction, People’s United Bank, which is headquartered in Bridgeport, Connecticut, states it has no ties to Florida, where the case is pending. The Daccache class-action lawsuit is filed in Miami, where Quiros resides and many of his businesses are located. 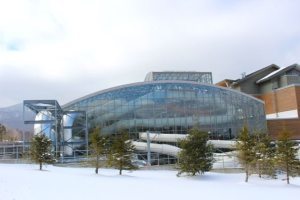 The water park at Jay Peak had cost overruns.

“(T)his Court is constitutionally precluded from exercising personal jurisdiction over People’s, a non-Florida resident which has no offices and does not do business in Florida, and which had no jurisdictional contacts with Florida giving rise to the claims in this action,” Minsker wrote.

Ronzetti, representing the investors, said the case against People’s United Bank stems from its “contacts” to Florida.

The Daccache case was brought shortly after state and federal lawsuits were filed in April alleging Stenger and Quiros misused about $200 million in investor funds raised the EB-5 visa program. Of that total, the state and federal lawsuits contend, about $50 million was misappropriated, in part, for Quiros’ personal expenses, including more than $2 million for a luxury condo in Trump Tower in New York City.

The U.S. Securities and Exchange Commission, which brought the federal lawsuit, stated that Stenger secured funds from investors and deposited those monies into escrow accounts at People’s United Bank, the SEC has said, and then transferred the money to mirror accounts in Quiros’ name at Raymond James.

The SEC has alleged that Quiros used investor money to buy the Jay Peak Resort in 2008 instead of using the money as they promised investors to build the Jay Peak and Tram Haus hotels. In a “Ponzi-like” scheme, the developers then raised money from new sets of investors for other projects to pay for the construction of the Jay Peak Hotel and the waterpark. This pattern continued with seven phases of the development until Stenger and Quiros ran out of money.

The money was supposed to be held in separate escrow accounts for each project, but the developers commingled the funds and used it to pay for other projects, the SEC has said.

The Daccacche suit alleges that the money was used in ways not permitted by the investor agreements, including for Quiros’ own personal expenses.

According to the Daccache lawsuit, the action was filed on behalf of a proposed class of 836 people who invested more than $400 million in the series of projects headed by Quiros and Stenger in northern Vermont as part of the federal EB-5 immigrant investor program.

The projects spanned several years, including hotels at Jay Peak and Burke Mountain, as well as others that never materialized, such as AnC Bio Vermont, a proposed $110 million biomedical research center in Newport.

In addition to Stenger, Quiros and People’s United Bank, other defendants named in the Daccache class-action lawsuit include Joel Burstein, Quiros’ broker at Raymond James as well as his son-in-law at the time, and the brokerage firm Raymond James.