Resorts in fraud case say they're hiring as usual for winter 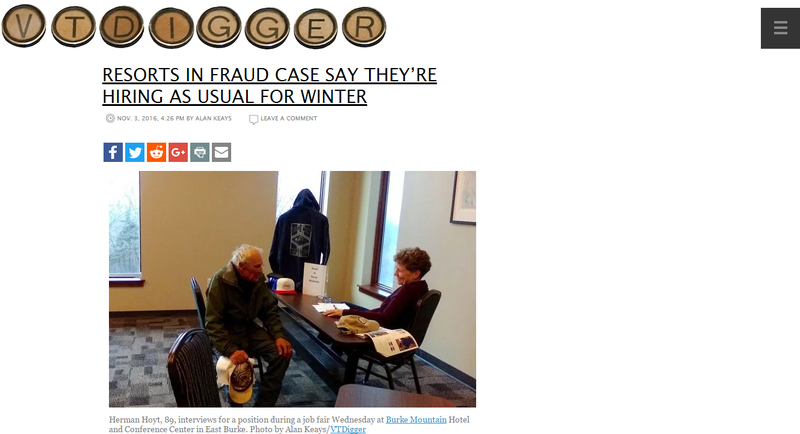 Herman Hoyt, 89, interviews for a position during a job fair Wednesday at Burke Mountain Hotel and Conference Center in East Burke.

Skylier Fournier, 15, of Richford, said he was looking to land his first “official” job. Herman Hoyt, of East Burke, explained he was hoping at age 89 to rejoin the labor force after a couple of years away.

“I can still kick ass,” said Hoyt, a feisty retiree from the postal service who has spent the better part of 50 winters working in one capacity or another at Burke Mountain, including serving as a member of the ski patrol and operating a lift.

“I’m just filling out the application and we’ll see,” added Fournier, a student at Richford Junior/Senior High School, who was seeking a job busing tables at Jay Peak Resort.

Generations apart, the two job seekers filled out forms and responded to interviewers’ questions at separate job fairs Wednesday in Vermont’s Northeast Kingdom as two resorts at the center of investment fraud allegations staff up for the ski season.

The two resorts started hosting job fairs last weekend and are holding several more across the Northeast Kingdom in the coming weeks. 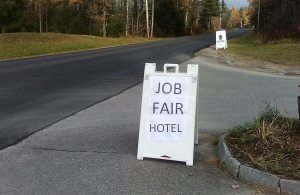 A sign announces a job fair Wednesday at Burke Mountain.

Burke Mountain and Jay Peak have been in the headlines since April when state and federal lawsuits were filed alleging investor fraud on the part of Ariel Quiros and William Stenger, developers at the two resorts.

The lawsuits, one brought by the state of Vermont and the other by the U.S. Securities and Exchange Commission, allege the two men misused $200 million in investor funds raised through the EB-5 visa program and meant for development projects in northern Vermont.

Quiros, a Miami businessman, is the owner of Q Resorts, a holding company that includes Jay Peak. Stenger is the former president and CEO of Jay Peak.

Michael Goldberg, a court-appointed federal receiver, now oversees both Burke Mountain and Jay Peak as the cases against Stenger and Quiros work their way through the courts.

Despite the EB-5 woes, the number of seasonal employees needed to fill jobs is on par with recent years, according to Steve Wright, Jay Peak’s general manager.

At Jay Peak, the resort employs between 525 and 550 in the summer and fall. That number rises to around 1,300 during the ski season, Wright said.

Through the job fairs, he said, the resort is looking to “actively recruit” 250 to 270 workers.

“We’ll get another 450 to 500, 550, that are sort of returning seasonal workers who we don’t actively recruit,” Wright said, “but who end up becoming part of the family again at some point early season.”

Wright added that it was too soon to predict how the lower unemployment rates across the region this season will affect the search for workers. Also, a Wal-Mart is set to open this month in the Northeast Kingdom, in Derby.

“It’s tough for me to fully comment on it until all the job fairs are done,” he said of the availability of workers.

Wright said the first couple of job fairs have had “moderate” attendance. 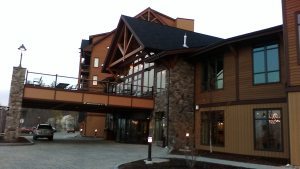 A flier lists 44 types of jobs available at the resorts, from housekeepers and cooks to lift attendants and snowmakers.

Pay depends on the position and level of experience.

“It’s all over the place from entry-level minimum wage jobs to some middle management,” Wright said. “We have a few sales positions open … we have some managerial positions within food and beverage, and retail open, I believe, as well.”

On Wednesday, the two job fairs were held at The Crossing restaurant and banquet facility in Richford, about 30 minutes from Jay Peak Resort, and at the recently opened Burke Mountain Hotel and Conference Center at the base of that resort’s slopes.

About 15 people, including Fournier, attended the event in Richford, while two hours into the three-hour job fair at Burke it appeared Hoyt was among a couple of dozen applicants.

“We turn very few people away. We try our best to find a position that fits their needs as well as ours,” she said. “We’re extremely flexible, willing to work with people.”

In addition to pay, there is an added perk to landing a seasonal position at one of the resorts. “All of our employees at both resorts get a free season pass to both, as well as their immediate families,” Hartman said.

Though the slopes at both resorts are not yet open for the winter, Hartman said new hires can get to work right away, learning the ropes at both facilities.

Carol Shepard, 50, of Victory, who works full time as a personal care attendant, left the job fair at Burke Mountain optimistic that she would be hired for a seasonal post and that it would eventually become a year-round position.

“That’s my ultimate goal,” she said.