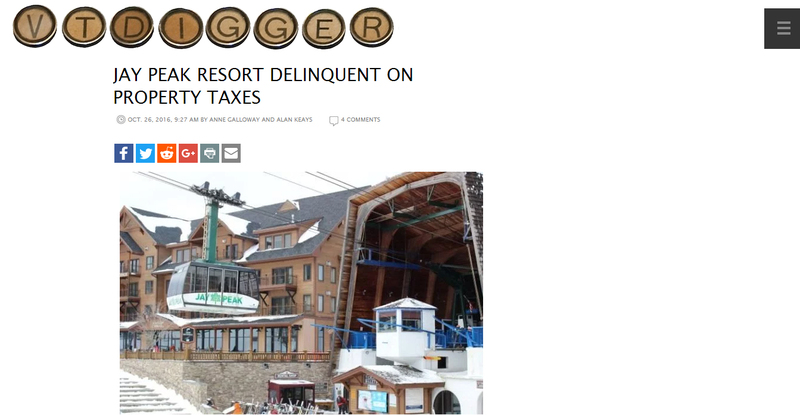 Jay Peak Inc., at the center of the EB-5 scandal in Vermont, is late paying its property taxes to the town of Jay.

The resort, along with its associated properties, have a total value of about $120 million on the town’s grand list, according to public records. That translates to an annual tax bill of a little more than $2 million.

Property taxes in Jay were due Oct. 14.

The taxes from Jay Peak Inc., including all the condos at the resort, are “probably two-thirds of the property taxes for the town,” Select Board Chairwoman Peggy Loux said Tuesday.

Michael Goldberg, the court-appointed receiver overseeing the Jay Peak properties after allegations of investor fraud were leveled at the developers in April, said he expected to pay the tax bill soon.

“The property taxes will be paid in full out of the Citibank settlement,” Goldberg said Tuesday, adding the reason the taxes weren’t paid earlier was due to the timing of the settlement’s approval last week, a few days after the tax deadline.

The settlement between the receiver and Citibank, a financial institution used by Ariel Quiros, one of the Jay Peak developers, totals $13.3 million.

Loux, who said Jay Peak Inc. has not been late in past years, wasn’t all that surprised when the tax deadline passed earlier this month and no payment came this time.

“They owe quite a bit of money and they can’t pay other bills,” she said. “With the money the receiver acquired [through the Citibank settlement], he has a lot of people to pay and we’re hoping we’ll be part of it.”

Loux said the matter is now in the hands of the town’s delinquent tax collector, Cindy Vincent Goodyear. She could not be reached Tuesday for comment.

Jay Peak Inc. owns several properties in town, including Hotel Jay, a waterpark, a tram, condos and a golf course.

Quiros, a Miami businessman is also the owner of Q Resorts, a holding company that includes Jay Peak Inc.

However, Jay Peak Inc. has been part of a court-appointed receivership since April, days after the U.S. Securities and Exchange Commission alleged that Quiros and William Stenger, former CEO and president of Jay Peak, misused $200 million in funding through the federal EB-5 foreign investor visa program.

Investors in the program put up at least $500,000, plus $50,000 for an administrative fee, and, in exchange, they become eligible for permanent U.S. residency if each investment creates 10 jobs.

Stenger, in September, settled the federal lawsuit brought against him by the SEC, agreeing to cooperate with investigators. He could be liable monetary penalty, based on his level of cooperation and ability to pay. He still faces the state lawsuit.

The state and the SEC both claim in the lawsuits that Quiros bought Jay Peak Resort on June 23, 2008, using EB-5 funds that were to be kept in escrow for the construction of two hotels.

The Citibank settlement stemmed from a $15 million credit line Citibank extended in March 2015 to Quiros, which he backed with collateral from two of his companies.

Those collateral funds later became part of the receivership and had been ordered frozen, making it impossible for the bank to recoup them after Quiros drew down his credit line.

Citibank, in August, settled with Goldberg, “without any admission of any liability.” Citibank agreed to pay $13.3 million to the receiver from the collateral accounts, which will now be unfrozen.

In addition to covering the property tax bill, Goldberg said funds from the Citibank settlement will go to make partial payments to contractors who worked on projects headed by Quiros and Stenger.

Those projects include a hotel built at Burke Mountain, an unfinished condo complex at Jay Peak called Stateside and a proposed biomedical center in Newport.

Work had only recently started on the AnC Bio Vermont facility when the state and federal lawsuits were filed. Federal regulators have deemed that now-stalled project “nearly a complete fraud.”

More than a dozen contractors are owed roughly $6 million for completed work. All have petitioned the U.S. District Court in South Florida for payment. The Vermont Economic Development Authority offered 4 percent loans to contractors who were struggling to make payroll, but many contractors rejected the offer because they didn’t want to pay the interest rate and they didn’t want to put up the level of collateral required by the state subsidized loan company.

“We are not going to pay the contractors in full. We will get them a sizable payout between 30 and 50 percent upfront,” Goldberg said Tuesday. “All of this is subject to the court’s permission. I don’t write checks without court approval.”

Additional money will come into the receivership through the sale of assets, including the ski resort and possibly the hole in Newport — a city block that was torn down in March 2015 and is owned by one of Quiros’ companies.

“We’re going into the ski season now,” Goldberg said. With a good season, he added, he expects to build up millions of dollars to operate the resort through the off-season.

According to the town’s website, property taxes were due at 5 p.m. Oct 14. A one-time 8 percent penalty is imposed on money received after 5 p.m. on that date. In addition, 1 percent interest is imposed for the months of October, November and December.

Starting in January, that penalty becomes 1.5 percent per month, the website states.

Goldberg said he hopes to talk the town regarding the late fees.

“That’ll be a battle we’re going to deal with,” he said. “That 8 percent can go to the contractors. I’m trying to work with everyone here, if they [officials from the town of Jay] don’t want to work with us they’ll be put back to the line.”

In addition to the money owed to contractors and the Town of Jay, Goldberg is faced with $5 million in improvements to the tram and another $5 million owed to vendors. In all, the resort has $18 million in liabilities outside of costs associated with routine operations.