EB-5 and skiing in Vermont’s Northeast Kingdom: The monumental scandal won’t deter the zealous skiers of the Green Mountain State 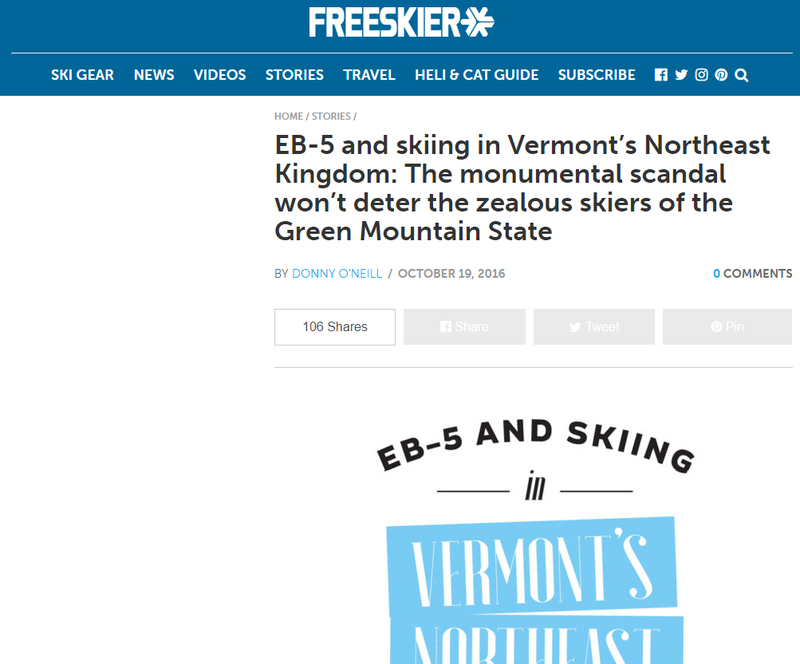 Last spring, the biggest ski-related scandal in Vermont’s history ignited when the U.S. Securities and Exchange Commission (SEC) brought charges of fraud against Ariel Quiros and Bill Stenger—owners and operators of Jay Peak and Burke Mountain. The SEC alleged that over $200 million of the over $400 million raised from a government program called EB-5 had been misappropriated. EB-5 gives foreign backers (and their families) who invest a minimum of $500,000 in qualifying stateside projects a fast track to United States citizenship, granted the project creates a minimum of 10 jobs.

The situation resembled the aftermath of a college house party: a mess complete with confusion, shame and an unpleasant stench. For Jay, the scandal took an eight-year stretch that saw the ski area evolve into a cash cow destination resort and flipped it on its head. At Burke, it was another sour note on top of four years of Quiros ownership that included a name change to “Q Burke Resort,” a slap in the face to one of Vermont’s loyal ski communities. And the foreign financiers were left wondering if they’d ever get a return on their investments.

Stenger, a resident of Newport, Vermont and Quiros, of Miami, Florida, vowed that EB-5 projects at Jay and Burke would create jobs and stimulate the economy in Vermont’s economically distressed Northeast Kingdom. Funds from EB-5 contributed to Jay’s Tram Haus hotel, Pump House indoor waterpark, a golf course club house and an ice arena, among other expansions. It transformed Jay from a small, remote ski area into a highly pro table four-season resort. In June 2014, Burke began work on the EB-5-funded, $58 million Q Burke Hotel and Conference Center. There was also a $110 million biomedical research center pledged to be built in Newport, a project the SEC called “a complete fraud.” 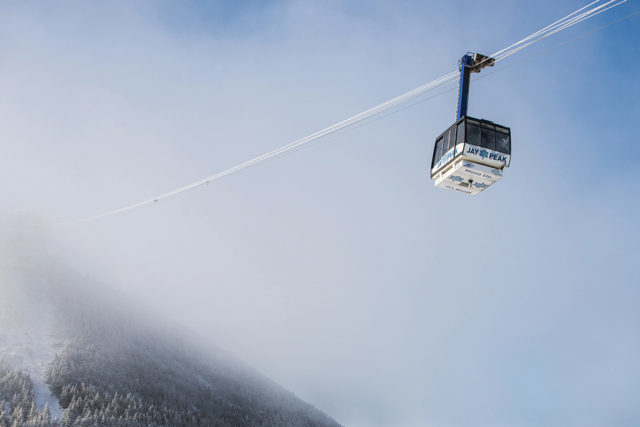 The SEC alleged that, with Quiros as the brain and Stenger as the body, a complex array of money transfers was facilitated through corporations and limited partnerships under the Jay Burke umbrella. This was to hide the fact that most of the EB-5 projects were over budget or suffering deficits. The money losses, according to the SEC, were as a result of Quiros pocketing tens of millions of investor dollars for himself.

Following the allegations, Leisure Hotel and Resorts was appointed to oversee day-to-day operations at both Jay and Burke, and a court-appointed receiver was selected to manage all assets. Meanwhile, panicked media headlines spread like wildfire, outlining dire financial situations at both resorts that would prohibit summer operations and Jay’s hallowed aerial tram from running.

The reports, however, proved false. While on their own Jay and Burke were unable to obtain lines of credit to aid in shoulder season operation, the receivership easily secured a loan ensuring both could remain open until winter. As for the tram, Jay simply needed to contractually commit to replacing its electrical system, which it did, to operate the famed lift for the summer. Despite the EB-5 turmoil, it appears both resorts will ride out the storm; Leisure Hotel and Resorts is entrusted with running both businesses until the fraud case is settled, the resorts are sold and investors receive maximum possible financial return, plus their green cards.

The dark cloud cast upon the Northeast Kingdom by the scandal dissipated almost as quickly as it formed. Amid the turmoil, a community of local, diehard skiers supported each resort through thick and thin. And their optimism, it seems, will carry the resorts through this winter. 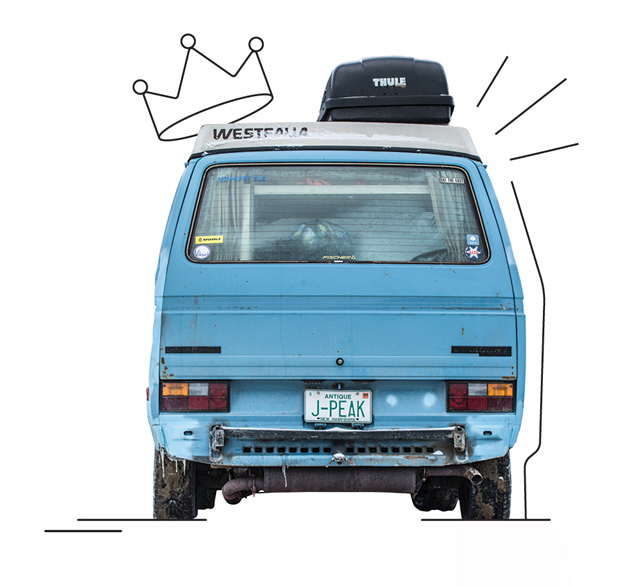 This car was Raised Jay.

From afar, it looked like a full-blown dumpster fire for Jay Peak, but weekend warrior Tim Fater—known for his photography work with Meathead Films—says the situation wasn’t so dire for the local contingent of shredders.

“It was April and Jay was doing a big tailgate party. Another big piece of the [EB-5] story had just broke,” he recounts. “It was pretty much just locals and [committed] weekend warriors in attendance, but it really wasn’t an issue; nobody cared, everybody was just partying, skiing bumps and wearing neon clothes. It just didn’t matter, the lifts were running and everybody was happy.”

The feeling was a bit more frantic for Steve Wright—longtime Jay Peak CMO and post-scandal appointed GM—and company, of course. But, when the scandal broke, they immediately went into stabilization mode. Wright communicated with staff, season pass holders, surrounding community members and vacationers, to let them know that aside from the ownership questions, the operating scenarios for Jay Peak were the same as always. The response was positive.

“We had concern that folks were going to be overly worried with the health of the company,” explains Wright. But, as of August 31, season pass sales were steady and winter package revenue was up about three to five percent from the previous year.

“If you had told me that a couple of months ago that this summer we’d actually be pacing ahead, I would have thought you were nuts,” Wright presumes. “But that is testament to the resiliency of the people who consider themselves ‘Raised Jay.’”

It’s a marketing slogan, yes, but being “Raised Jay” does reflect the people who frequent the ski area. The mountain, with its remote location, abundant snowfall, steep faces, tight trees and cliff drops, is as rugged and gritty as the people in the region it calls home. Even with years of expansion and an influx of money from EB-5, dollar bill signs hadn’t changed the local legion of skiers and losing those green backs wasn’t going to transform them, either.

“It almost wasn’t that surprising. Like, ‘no sh#t,’ anybody who gets that much money, that quickly, is going to mess something up,” Fater recounts. “It was this classic Vermont sentiment of, ‘eh, well, we saw that coming.’”

For the Jay-faithful, instead of tracking the legal proceedings, they’ll be counting down the days until the lifts spin again. When they can accelerate down runs like Valhalla, Staircase, Vertigo and the Face Chutes, and harvest the powder provided by the holy “Jay Cloud.”

About 60 miles southeast, Burke’s stabilization was a much more daunting task than that of its Northeast Kingdom sibling. Jay was a well-oiled machine, while Burke—reeling from large-scale layoffs at the end of the season, a history of bankruptcies and a revolving door of owners—had to call all hands on deck.

“We didn’t have the infrastructure in place because of the massive layoffs,” details Jessica Sechler, marketing manager for Burke Mountain. “It was a total hands-on approach for Burke and the management company to make sure we got all operations back online as planned.”

Thanks to a combination of hard work from the existing employees and assistance from Leisure Hotel and Resorts, the ski area got trained staff back on board, fired up the sales systems and put the finishing touches on the pristine hotel. The ribbon was cut on September 8 and the EB-5 funded luxury hotel—re-named The Lodge at Burke Mountain—is now open for business. 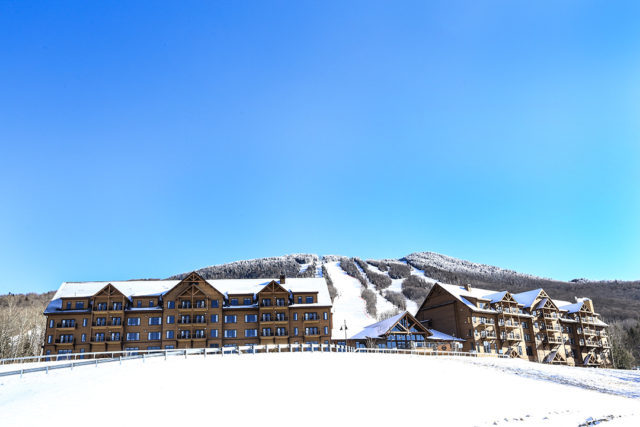 The Lodge at Burke Mountain.

With the unceremonious exit of the Q Resorts ownership, the community is also relieved.

Locals had disliked the Quiros’ assuming of the throne from the start, when the “Q” was added to Burke, but Ary Quiros—Ariel’s son put in charge of operations—also soiled longstanding community relationships with the Kingdom Trails Association and Burke Mountain Academy. The area residents were happy to have him kicked to the curb.

“There was a silver lining in all of the drama, specifically with the community and the way that previous management had interacted with it,” explains Sechler. “It’s a sigh of relief. It was so symbolic to remove the Q Burke logo and put up the old Burke Mountain version. We have that familiar feeling again, of the old days, we’ve brought back that tight-knit mountain community.”

And to further sweeten the departure, Burke has a fancy new hotel to itself. The dust has seemingly settled in the bucolic Northeast Kingdom with its notched peaks sprouting skyward from farmland and blue collar society that contrasts the quaint, idyllic, white steeple church-laden perception of Vermont. Now, the people can get back to their favorite pastime: skiing.