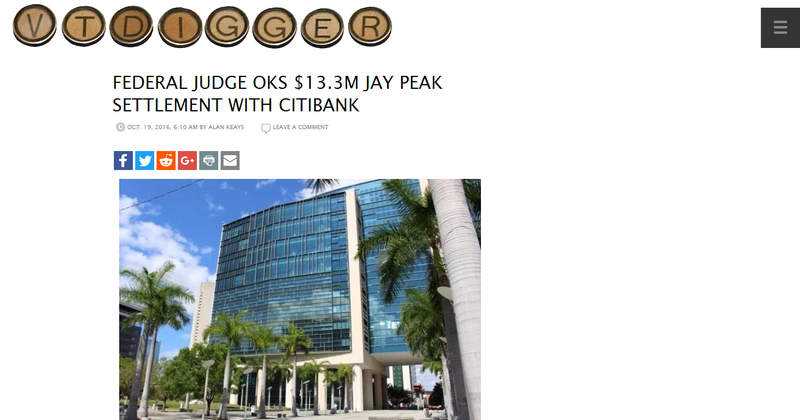 A federal judge has approved a $13.3 million settlement between a court-appointed receiver overseeing properties at the center of the largest alleged fraud case in the state’s history and a bank for one of the accused developers.

“The Settlement Agreement was entered into in good faith, is at arm’s length, and is not collusive,” Judge Darrin P. Gayles wrote Tuesday.

“The Receiver has a present and immediate need for the funds he is receiving pursuant to the settlement so as to preserve and maximize the value of the assets in the Receivership Entities for the benefit of their investors and other creditors and stakeholders,” Gayles wrote in the court order.

The settlement funds, in large part, will go to run ski operations at Jay Peak and pay contractors for work on two projects in the Northeast Kingdom, including a hotel built at Burke Mountain and a biomedical center in Newport that was stalled in the initial phases of development (site work was completed).

“Without this liquidity, a substantial risk exists that the Jay Peak resort will cease to operate as a going concern, thus impairing its value upon sale – and the ultimate return to EB-5 investors – as liquidation values are generally significantly less than going-concern values,” court records filed in August along with the proposed settlement state.

Michael Goldberg, the court-appointed attorney, said late Tuesday afternoon he was pleased with the judge’s order.

“We believe he reached the right decision,” Goldberg said of the judge. “I think our settlement and our requested relief was well-founded in the law and the facts.”

Two sets of investors had initially filed objections to the settlement.

One group, made up of eight people who are involved in separate litigation against entities involved in the Vermont development projects that led to the fraud allegations, withdrew their objection late last week.

Another group, consisting of 36 Chinese investors who who put money into AnC Bio Vermont, a biomedical center in Newport that was never built and deemed “nearly a complete fraud” by regulators, had also challenged parts of the proposed settlement.

Those investors raised concerns over how the settlement proceeds would used. They claimed that the money was stolen from AnC Bio Vermont and should be used solely to repay investors in that project.

“That objection has since been resolved by the inclusion of certain additional language herein requiring, among other things, that the Settlement Amount be segregated, accounted for, and reported by the Receiver in his quarterly reports,” Gayles wrote in his order.

A hearing set for Thursday in federal court in Miami to consider objections from both groups was canceled Tuesday, following the approval of the pact by the judge.

The settlement brings to a close a legal dispute that began in March 2015 when Citibank extended a $15 million credit line to Ariel Quiros, a Miami businessman, which he backed with collateral from two of his companies.

Those funds later became part of the receivership and had been ordered frozen, making it difficult for the bank to recoup them after Quiros drew down his credit line.

Goldberg, the receiver, had said that the pledged money was part of the receivership, arguing that it was improperly diverted by Quiros from foreign investors who put up money into his projects through the federal EB-5 visa program

Citibank, in August, agreed to settle the dispute “without any admission of any liability,” and paying $13.3 million to the receiver from the accounts, which will now be unfrozen.

Also, as part of the settlement, future litigation against the bank from investors related to the action is barred.

“(T)he Court further finds and determines that entry into the Settlement Agreement is a prudent exercise of business judgment by the Receiver,” Gayles wrote in Tuesday’s order.

There are still many legal proceedings ahead for Quiros and his one-time business partner in developing projects in Vermont’s Northeast Kingdom, William Stenger of Newport.

Quiros, owner of Q Resorts, a holding company that includes Jay Peak, and Stenger, former Jay Peak president and CEO, are accused in state and federal lawsuits filed in April of misusing more than $200 million from EB-5 investors.

Stenger has since settled his federal case brought by U.S. Securities and Exchange Commission by agreeing to cooperate with investigators. He may still face a monetary penalty, based on his level of cooperation and his ability to pay.

A federal class-action lawsuit has also been filed by investors, naming Raymond James Financial Services and both Stenger and Quiros as defendants. That case is also pending in federal court in Miami.