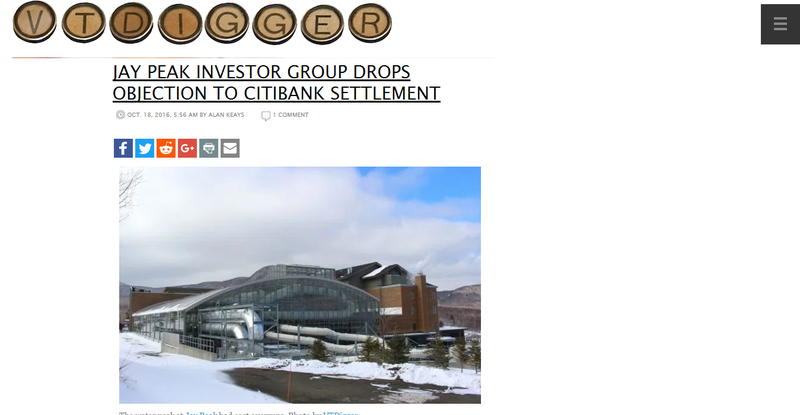 The water park at Jay Peak had cost overruns.

One of two groups of investors who challenged a $13.3 million settlement with a bank for a developer facing fraud allegations in development projects in northern Vermont have withdrawn their objection.

Villasante represents a group of eight investors in a pending state lawsuit in Florida against “various entities and individuals in order to perfect their rights and collect damages that result from misappropriated investments made in Jay Peak Resort entities.”

The attorney earlier this month filed an objection to a proposed $13.3 million settlement with Citibank, a financial institution used by one of the developers, Ariel Quiros, a Miami businessman.

That deal, reached in August, is between the court-appointed receiver now overseeing the properties at the center of the alleged fraud case in Vermont, and Citibank.

Exactly what convinced Villasante to change his position is unclear. His two-page filing provides no details of any of the changes “that satisfactorily addresses” the issues he raised in his initial objection.

Villasante, in his filing stating his objection, took issue with where the money from the settlement would be going, as well as a provision barring future litigation against the bank from investors.

A large percentage of the settlement funds is proposed to go to running ski operations at Jay Peak as well as pay contractors who haven’t received payment for work on the Burke Mountain and AnC Bio Vermont projects. The settlement proposal does not call for any funds to go directly to investors.

“Without this liquidity, a substantial risk exists that the Jay Peak resort will cease to operate as a going concern, thus impairing its value upon sale – and the ultimate return to EB-5 investors – as liquidation values are generally significantly less than going-concern values,” court records filed along with the proposed settlement state.

A separate objection to the proposed settlement with Citibank remains pending. It was raised by a group of 36 Chinese investors who put money into a biomedical center in Newport that was never built.

That project, headed by Quiros and William Stenger of Newport, has been deemed “nearly a complete fraud” by federal regulators.

Quiros, owner of Q Resorts, a holding company that includes Jay Peak, and Stenger, former Jay Peak president and CEO, are accused in state and federal lawsuits filed in April of misusing more than $200 million from foreign investors through the federal EB-5 visa program.

The money was raised to fund a series of development projects in the state’s Northeast Kingdom.

Citibank, in March 2015, extended a $15 million line of credit to Quiros. After drawing down that credit line, the bank has been unable to collect from Quiros, according to court records.

Those funds are now part of the receivership and have been ordered frozen.

Michael Goldberg, the receiver, had claimed that the pledged money was improperly diverted by Quiros from EB-5 investor funds. He argued those funds should be turned over to the receivership.

In August, Citibank agreed to settle the dispute over those funds with Goldberg, “without any admission of any liability.”

A federal judge still must approve the settlement, after finding it is “fair, adequate and reasonable,” according to court records.