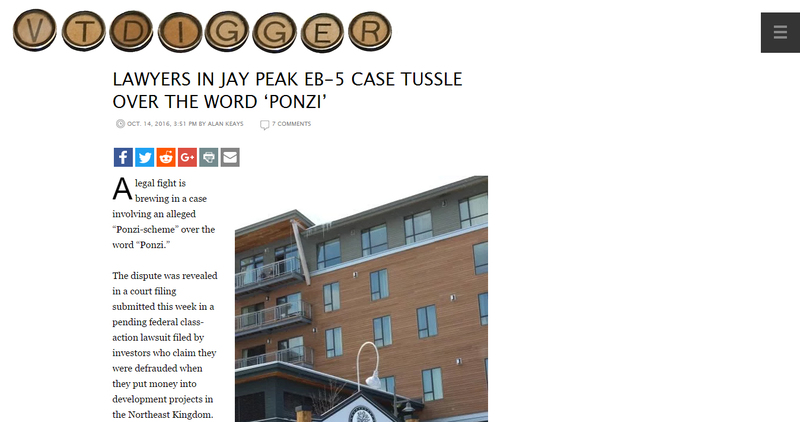 EB-5 investors put $75 million into the Hotel Jay projects, which included a five-story hotel, water park, golf and nordic center and ice arena. The developers solicited an additional $32 million for a project known as Penthouse Suites for the fifth floor of the hotel.

A legal fight is brewing in a case involving an alleged “Ponzi-scheme” over the word “Ponzi.”

The dispute was revealed in a court filing submitted this week in a pending federal class-action lawsuit filed by investors who claim they were defrauded when they put money into development projects in the Northeast Kingdom.

Thomas A. Tucker Ronzetti, one of the attorneys representing the investors, wants a judge to “compel” Raymond James & Associates, Inc., to turn over information he claims is relevant.

That includes, he wrote, checking its “ESI,” or electronically stored information, for certain words, or combination of words.

“Accordingly,” he added, “this court should order RJ to use the search term Ponzi.”

The U.S. Securities and Exchange Commission used the word “Ponzi” in its federal lawsuit filed in April against developers, Ariel Quiros and William Stenger. The SEC allege the two men engaged in a “Ponzi-like” scheme to finance several of their northern Vermont projects.

That lawsuit, as well as another filed at the same time by the state attorney general’s office, claimed the two developers misused more than $200 million in EB-5 investor funds.

The dispute over the search term “Ponzi” is just one of several that Ronzetti wants the judge to settle as the suing investors seek documents from Raymond James & Associates, a defendant in the case along with Quiros, a Miami businessman, and Stenger, a Newport resident.

In addition, the attorney is seeking minutes from the firm’s board of director meetings, policies and procedures concerning the hiring and supervision of employees as well as documents the company provided to any federal, state or local government agencies, including the SEC.

Attorneys for the plaintiffs “conferred” with lawyers for Raymond James & Associates four separate times “in a good faith effort” to resolve the issues.

“The parties were unable to reach a resolution,” Ronzetti wrote.

Daccache, who lives in Brazil, invested $500,000 in 2010 as part of the EB-5 program in the Penthouse Suites project, which is part of the Hotel Jay.

The lawsuit alleges that Quiros “orchestrated” the fraud, and Stenger, his business partner, as well as Joel Burstein, Quiros’s former son-in-law and the former branch manager for Raymond James, “enabled” the alleged fraud.

The lawsuit states that the bank allowed Quiros to create “an intricate web of transfers among various accounts at Raymond James to hide the fact that most of the seven projects were either over budget or experiencing shortfalls.”

The lawsuit is pending in federal court in Miami, where Quiros lives and his many businesses are located.

Attorneys in the case could not be reached Thursday for comment.