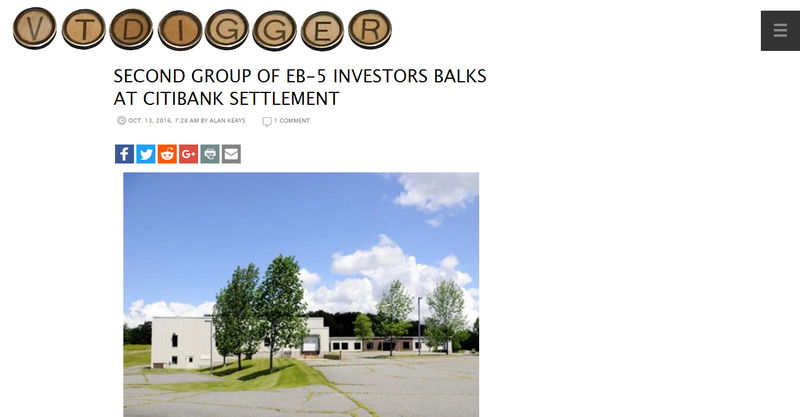 Another group of investors in projects in northern Vermont that led to allegations of fraud say they are objecting to a $13.3 million settlement with a bank used by one of the developers.

A Florida attorney representing eight clients says that no money from the settlement will go to “defrauded investors.” Instead, the attorney says, much of the money will be used to operate a ski area and pay contractors for work done at properties associated with the alleged fraud case.

“(The investors) are asked to acquiesce to the settlement in exchange for the uncertainty that their respective Jay Peak Entities might one day bring their investments to fruition,” Roberto Villasante wrote in a filing submitted this week in federal court in Miami.

He wrote in his filing that his clients are plaintiffs in a pending state lawsuit in Florida against “various entities and individuals in order to perfect their rights and collect damages that result from misappropriated investments made in Jay Peak Resort entities.”

The filing contains similar arguments raised in a separate objection to the proposed settlement also submitted this week by a group of 36 Chinese investors who put money into a stalled project headed by the same developers to build a biomedical center in Newport.

The proposed $13.3 million settlement between the court-appointed receiver now overseeing the properties at the center of the alleged fraud case in Vermont, and Citibank, a financial institution used by one of the developers, was reached in late August.

EB-5 investors put up $500,000, plus a $50,000 administrative fee, in qualified projects. If that investment creates 10 jobs, the person becomes eligible for permanent U.S. residency.

The money raised by Quiros and Stenger was expected to fund a series of development projects at Jay Peak and around the Northeast Kingdom, includings hotels and a proposed biomedical center in Newport.

In March 2015, Citibank extended a $15 million line of credit to Quiros, which he has since drawn down and the bank has been unable to collect, according to court records.

Those two companies, which are run by Quiros, are now part of the receivership, and the assets have been ordered frozen.

Michael Goldberg, the receiver, claimed that the pledged money was improperly diverted by Quiros from EB-5 investor funds. He had said those funds should be turned over to the receivership.

In August, Citibank agreed to settle the dispute over those funds with Goldberg, “without any admission of any liability.”

A large percentage of the settlement money is expected to be used to make payroll for employees at Jay Peak and pay trade vendors owed for work on the projects, according to court filings.

“Without this liquidity, a substantial risk exists that the Jay Peak resort will cease to operate as a going concern, thus impairing its value upon sale – and the ultimate return to EB-5 investors – as liquidation values are generally significantly less than going-concern values,” court records filed along with the proposed settlement state.

Also, as part of the settlement, Citibank is seeking assurances that no claims can be asserted against the bank related to the federal lawsuit brought by the U.S. Securities and Exchange Commission, or the receivership.

Villasante, in his filing this week, took issue with both where the money from the settlement would be going, as well as a provision barring future litigation against the bank.

“It appears that the proposed settlement seeks to recover funds from Citibank for use by Jay Peak Receivership entities in an attempt to rehabilitate their operations, pay outstanding debts, particularly wages, and compensate the Receiver for its services,” Villasante wrote in his filing.

He added, “It further appears that no portion of these settlement funds is being allocated for the purpose of compensating the defrauded investors.”

Also, the attorney wrote, while Citibank is not a party to the current state lawsuit, he didn’t know what future discovery in the case would reveal.

At this time, Villasante wrote, his clients have “a well-founded reluctance to surrender valuable legal rights” regarding Citibank “on pure speculation.”

Goldberg could not be reached Wednesday for comment, and no response to the settlement objections have yet been filed.

The filing announcing the proposed settlement laid out factors that the judge needs to consider when deciding whether to support it.

“To approve a settlement in an equity receivership, a district court must find the settlement is fair, adequate and reasonable, and is not the product of collusion between the parties,” the filing stated.

A judge needs to also consider, the filing added, “the substance and amount of opposition,” as well as the likelihood of success.

A hearing on the matter is set for Oct. 20 in federal court in Miami.