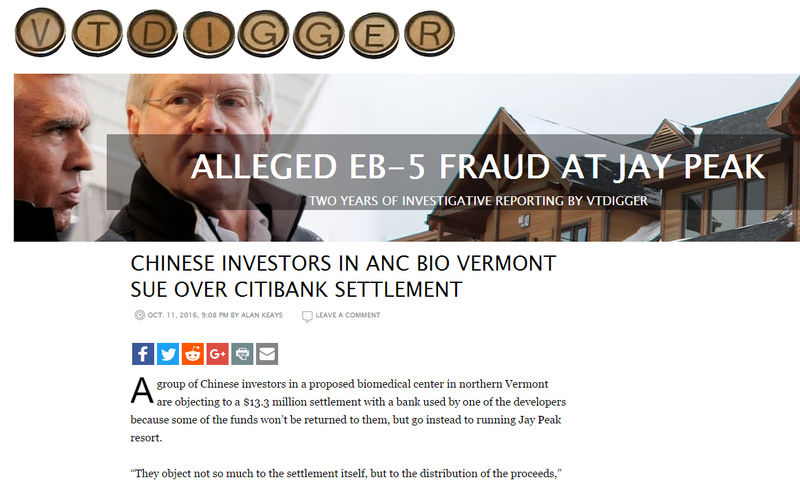 A group of Chinese investors in a proposed biomedical center in northern Vermont are objecting to a $13.3 million settlement with a bank used by one of the developers because some of the funds won’t be returned to them, but go instead to running Jay Peak resort.

“They object not so much to the settlement itself, but to the distribution of the proceeds,” said Linda Worton Jackson, a Florida attorney representing clients called in the document, “The Group 7 Ad Hoc Committee.”

The settlement, if approved by a federal court judge in Miami, would allow Citibank to pay $13.3 million to the court-appointed receiver, which would be used to operate the Jay Peak Resort properties.

Michael Goldberg, the court-appointed receiver, could not be reached Tuesday for comment.

Jackson said the Group 7 Ad Hoc Committee is made up of 36 EB-5 investors from China who put money into the biomedical center project in hopes of obtaining green cards.

The biomedical center proposal was known as Phase VII in a series of projects at Jay Peak Resort fueled by EB-5 immigrant investor funds. Ariel Quiros and William Stenger, the developers, have been charged with misusing $200 million in investor monies.

Jackson said her clients are entitled to the entire $13.3 million from the proposed settlement between Citibank and the receiver.

The receiver is overseeing the biomedical center property as well as other properties associated with projects headed by Quiros and Stenger who are at the center of the largest alleged fraud case in the history of the EB-5 program.

EB-5 investors put up $500,000, plus a $50,000 administrative fee, into a qualified project. If, at completion, that investment created 10 jobs, the investor is eligible for permanent U.S. residency.

State and federal lawsuits filed in April accuse Quiros, owner of Q Resorts, a holding company that includes Jay Peak, and Stenger, one-time CEO and president of Jay Peak, of misusing $200 million in EB-5 funds as part of the development projects.

Hundreds of investors in the projects headed by Stenger and Quiros are in jeopardy of losing their money and possible U.S. citizenship, including those who put up funds for a proposed $110 million biomedical center in Newport.

Federal regulators have called that project “nearly a complete fraud.”

According to the federal lawsuit filed by the Securities and Exchange Commission, Jackson wrote, a large portion of the funds pledged as collateral for the Citibank line of credit are Group 7 investors’ funds.

Citibank has contended that Quiros has not repaid the amounts drawn down under the credit line, and the bank has not been able to recover the funds through legal action.

Goldberg alleged in court filings that the $17 million in collateral accounts are the property of Jay Construction Management and QRI, two companies run by Quiros that are now part of the receivership.

Goldberg claimed the money was improperly diverted by Quiros from EB-5 investor funds and he demanded that all of the funds be turned over to the receivership.

Citibank disputed Goldberg’s claims and has “indicated its intention to defend any such claims vigorously.”

To avoid litigation, Citibank agreed to settle with Goldberg in late August, “without any admission of any liability.”

The $13.3 million was expected to be paid in three installments: $1.8 million before the settlement agreement was finalized; $700,000 at the time of the settlement; and $10.8 to be paid after the deal is completed.

The total amount represents a 78 percent recovery of the funds in the collateral accounts.

Citibank is giving up nearly all of the collateral for a line of credit that is in default, Goldberg wrote in a filing.

As part of the deal, Goldberg was expected to request from the court a lift of the asset freeze on the collateral accounts.

The settlement also called for Goldberg to establish a claims process for EB-5 investors and other parties, such as the contractors who have not been paid for work performed at Jay Peak and Burke Mountain resort.

About $10.8 million will be used to make payroll for 500 employees at Jay Peak, pay trade vendors who are owed $5 million in past due accounts, and make necessary repairs, according to court filings.

The deal is contingent on “global peace.” In order for the settlement to go through, Citibank is seeking assurances that no claims can be asserted against the bank related to the SEC action or the receivership.

Goldberg, the receiver, has given all affected parties, investors and creditors, an opportunity to object to the settlement and participate in a hearing.

That hearing is set for Oct. 20 in federal court in Miami.