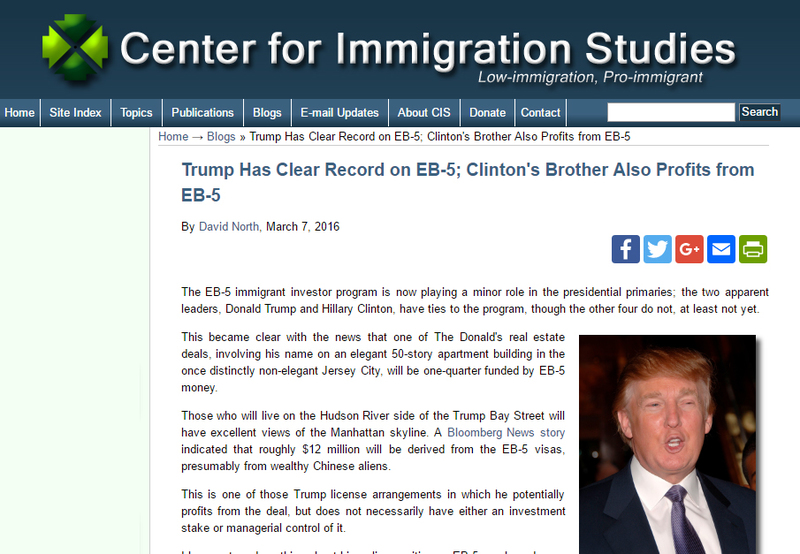 The EB-5 immigrant investor program is now playing a minor role in the presidential primaries; the two apparent leaders, Donald Trump and Hillary Clinton, have ties to the program, though the other four do not, at least not yet.

This became clear with the news that one of The Donald's real estate deals, involving his name on an elegant 50-story apartment building in the once distinctly non-elegant Jersey City, will be one-quarter funded by EB-5 money.

Those who will live on the Hudson River side of the Trump Bay Street will have excellent views of the Manhattan skyline. A Bloomberg News story indicated that roughly $12 million will be derived from the EB-5 visas, presumably from wealthy Chinese aliens.

This is one of those Trump license arrangements in which he potentially profits from the deal, but does not necessarily have either an investment stake or managerial control of it.

I have not read anything about his policy position on EB-5, nor have I seen anything about Hillary Clinton's position. But in her case, there are direct ties between her brother, Anthony Rodham, and the program. As CIS has reported in the past, Rodham is an officer of the regional center that raised money for the since-collapsed Greentech proposal to build energy-efficient golf carts; at one time the project also involved Terry McAuliffe, before he became a candidate for Virginia's governorship.

Sens. Bernie Sanders, Marco Rubio, and Ted Cruz — again to my knowledge — have not discussed EB-5 in the campaign; nor has Governor John Kasich.

Sanders, who is famously critical of the nation's 1 percent, represents one of the few states in the union in which EB-5 moneys have gone to honest-to-God poor rural areas; in this case in the Northeast Kingdom of northern Vermont. That the investments went there is the result of the work of the other senator from the state, Pat Leahy (D), during his tour of duty as the chairman of the Senate Judiciary Committee. (EB-5 money routinely goes to glittering downtown areas in America's big cities.)

Speaking of Sanders, an earlier blog of mine was accurate, but incomplete about his immigration policy positions. Yes, he voted for the Gang of Eight's "comprehensive immigration reform" bill, as I wrote, but he also has been highly critical of the H-1B program.