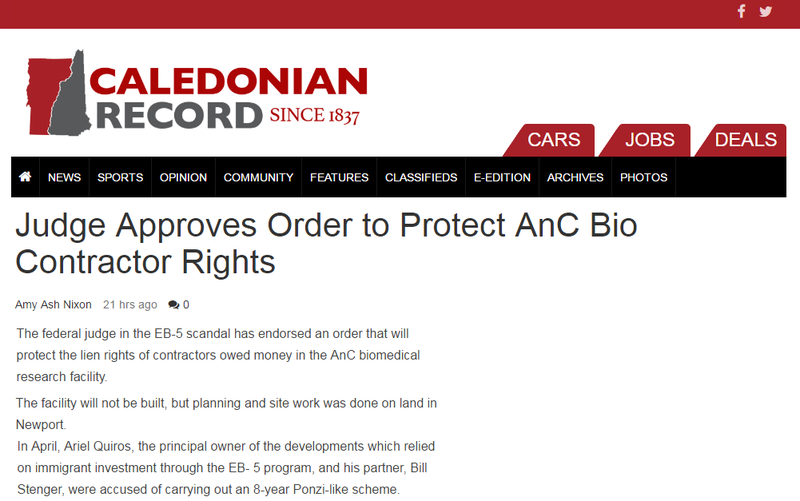 The federal judge in the EB-5 scandal has endorsed an order that will protect the lien rights of contractors owed money in the AnC biomedical research facility.

The facility will not be built, but planning and site work was done on land in Newport.

In April, Ariel Quiros, the principal owner of the developments which relied on immigrant investment through the EB- 5 program, and his partner, Bill Stenger, were accused of carrying out an 8-year Ponzi-like scheme.

The Securities Exchange Commission and the Vermont Attorney General accused the pair of misappropriating more than $200 million in investor funds, and Quiros alone is accused of diverting another $55 million-plus.

Stenger has reached a settlement with the SEC, but could still face civil penalties and criminal charges; he is cooperating with the investigation. Quiros will face trial next year, court documents show.

The EB-5 program sees immigrant investors pledge more than a half million dollars each and when jobs are created through economic development projects, the investors receive permanent green cards.

Because of the scandal and the complex court case now playing out in U.S. District Court in Miami, Fla., the immigration status of hundreds of those investors is now in question.

On Friday, U.S. District Court Judge Darrin Gayles endorsed an order which protects the lien rights of the general contractor, PeakCM, and subcontractors, who are owed more than $2.2 million for work done on the AnC Bio project.

On Tuesday, Sandy Fead, the attorney for PeakCM said in an email, “PeakCM appreciates the cooperation of (federal) receiver Michael Goldberg in preserving the lien rights of the contractor and subcontractors who performed preliminary work for the AnC Bio project.”

“Their work included demolition of one wing of the pre-existing building, closing in the remaining portion of the building, installation of site utilities and driveways, preliminary grading and preparation of the site for commencement of construction of the building itself, as well as engineering and consultation on building design,” said Fead. “PeakCM and its subcontractors had expected the project owner to give notice in April 2016 to proceed with the balance of construction but instead the Receiver was appointed (to oversee the seized assets of Quiros) and the project halted.”

Fead said, “Hopefully the Receiver will find a way to pay the contractor and subcontractors for their work and services.”

Goldberg filed the proposed order with the court at the request of PeakCM, said Fead.

In an attachment filed with the recent court motion, Goldberg noted that PeakCM LLC is owed $2,170,649, including amounts owed to subcontractors; a separate stipulated writ of attachment notes that Dale Percy Inc. is owed $113,061.60 for site work; Hallam Associates is owed $100,036.29 for consultant administrative services; Mike’s Electric Inc. is owed $27,729.20 for electrical work; Myers Container Services Corp. is owed $1,707.45 for trash removal; Trudell Consulting Engineers Inc., is owed $9,968 for design and permitting; and William Scotsman, Inc., is owed $26,248 for an office trailer.

In the order granted by the judge in recent days, Goldberg had noted that “There is no liability insurance, bond or other security available to satisfy any such judgment,” to make the contractor and subcontractors whole, so the lien assurance is critical to those businesses which performed services and are out substantial sums.

A similar order modifying the receivership order and preliminary injunction issued by the court in April to include another firm which did work at the new hotel in Burke that is part of the Receivership assets, Trane US, Inc., who provided heating, ventilating and air conditioning equipment to a subcontractor for PeakCM, who was the general contractor for the new hotel.

The court earlier modified the Receiver’s order to include the general contractor and subcontractors still owed about $4 million for the new hotel. Trane sought to be included in the order, to preserve its lien rights to be paid money that company is still owed.

Trane is a national company; the order including the firm to protect the business’s lien rights does not specify how much Trane is owed for its supplies to the new hotel at Burke.