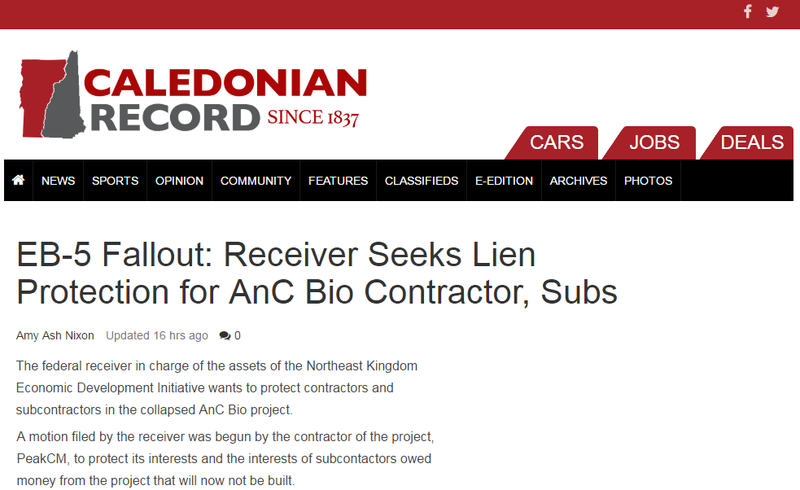 The federal receiver in charge of the assets of the Northeast Kingdom Economic Development Initiative wants to protect contractors and subcontractors in the collapsed AnC Bio project.

A motion filed by the receiver was begun by the contractor of the project, PeakCM, to protect its interests and the interests of subcontactors owed money from the project that will now not be built.

In April the state and federal government accused Ariel Quiros and Bill Stenger of perpetrating a “ponzi-like” fraud scheme through the federal EB-5 program. The developers are accused by the Securities Exchange Commission and Vermont Attorney General of misappropriating more than $200 million. Quiros is also accused of diverting $55 million more for his personal use.

Millions of dollars are owed to contractors, subcontractors and vendors associated with the various projects, and the immigration status of hundreds of foreign investors who put up a half-million dollars each, in exchange for green cards, is now in jeopardy.

The federal receiver, Michael Goldberg, is trying to right the assets, prepare them for sale, and represent the interests of allegedly defrauded investors.

Goldberg recently filed a motion in U.S. District Court in Miami, Fla., to modify his initial receivership/temporary injunction to expand the protection of lien rights for contractors and subcontractors who are owed money for the AnC Bio project. Goldberg is managing assets at Jay Peak and Burke Mountain resorts as well as the other half-dozen projects and partnerships formerly under Quiros’ control,

The AnC-Bio project was slated to become a biomedical research facility in Newport. Authorities now characterize the project, which promised as many as 500 high-paying jobs, as “almost a complete fraud.” Though it was never built, a number of businesses worked on plans toward construction.

Similar motions, to expand receivership, have been granted by the court. Most recently Goldberg secured power to protect lien rights for contractors involved with the hotel and conference center at Burke Mountain.

In Goldberg’s filing he states, “Pre-construction and construction work was performed on the AnC Project, including but not limited to, substantial site clearing and earthwork, demolition, installation of utilities, renovation of an existing structure, and design services. That work was performed between May 2015 and April 2016.”

One of the companies owed in the AnC Bio project is PeakCM, which is also still owed millions in the Burke hotel project, according to its owner, Jerry Davis, and attorney, Sandy Fead. PeakCM was retained as the AnC Bio general contractor and expected to be constructing the state-of-the-art facility this year.

“Representatives of PeakCM have conferred with the receiver and demanded payment,” according to the Receiver’s recent filing with the court. “PeakCM and the AnC subcontractors seek to preserve their lien rights relating to the AnC project under Vermont law.”

According to Fead, PeakCM’s attorney, the motion filed by the receiver in recent days was “initiated (by PeakCM) to preserve its lien rights and those of its subcontractors on the AnC Bio project.”

The proposed order by Goldberg would mean that PeakCM and subcontractors on AnC Bio would not have to file liens with the City of Newport land records, but their lien rights would be preserved by the federal court, if the judge enters the modification order being requested by the receiver.

Goldberg notes that, the “primary purpose of equity receiverships is to promote orderly and efficient administration of the estate by the district court of the benefit of creditors.” He argues that preserving the lien rights of the firms owed money for the AnC-Bio project serves everyone allegedly burned by Quiros.

“The Receiver recommends that all liens filed should be treated pari passu to avoid a race to the courthouse,” Goldberg writes. “This will give the Receiver enough time to evaluate the claims and liens and attempt to formulate a payment plan acceptable to PeakCM and the AnC subcontractors.”

In an attachment filed with the motion, Goldberg notes that PeakCM LLC is owed $2,170,649, including amounts owed to subcontractors; a separate stipulated writ of attachment notes that Dale Percy Inc. is owed $113,061.60 for site work; Hallam Associates is owed $100,036.29 for consultant administrative services; Mike’s Electric Inc. is owed $27,729.20 for electrical work; Myers Container Services Corp. is owed $1,707.45 for trash removal; Trudell Consulting Engineers Inc., is owed $9,968 for design and permitting; and William Scotsman, Inc., is owed $26,248 for an office trailer.