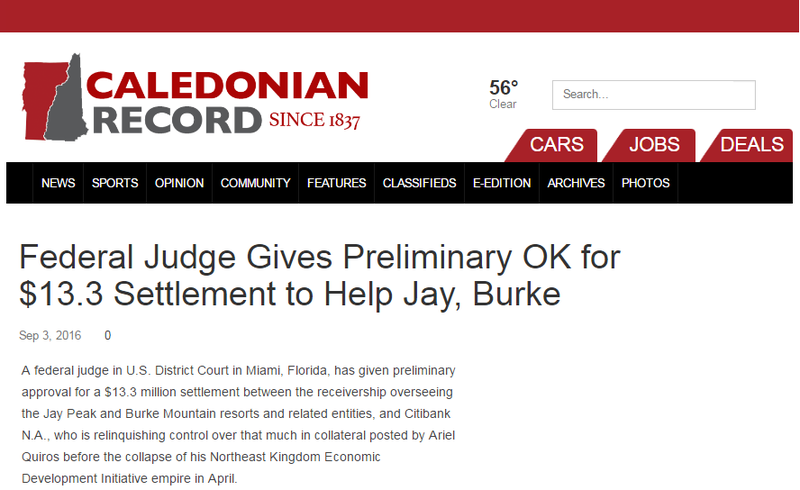 A federal judge in U.S. District Court in Miami, Florida, has given preliminary approval for a $13.3 million settlement between the receivership overseeing the Jay Peak and Burke Mountain resorts and related entities, and Citibank N.A., who is relinquishing control over that much in collateral posted by Ariel Quiros before the collapse of his Northeast Kingdom Economic Development Initiative empire in April.

Quiros had taken a $15 million line of credit through Citibank, and posted $17 million in collateral, money that the federal receiver put in place after shocking securities fraud allegations hit this spring. The receiver says that money belongs to the receivership and its investors, not Quiros.

Citibank has agreed to let go of $13.3 million of that collateral, and has already paid the receivership $2.5 million, and another $10.8 million will flow to the receivership once the settlement is officially approved by the judge.

The nearly $11 million will help the two ski resorts to meet payroll and begin to pay down debts to contractors, subcontractors and vendors.

The judge will not officially accept the settlement until a hearing in federal court, where parties affected by the settlement may speak. It will be held in October, according to court documents posted Friday.

The final hearing on the settlement is set for Oct. 20.

If no objections are filed, the final hearing will be canceled, according to the preliminary agreement.

U.S. District Court Judge Darrin P. Gayles said in his preliminary approval of the settlement, “the Court finds that the settlement is fair, adequate and reasonable.

Quiros was accused in April of masterminding a Ponzi-like scheme to defraud international investors in the EB-5 funded projects at both resorts and affiliated development projects, as was his partner, Bill Stenger, who this week reached a settlement with the federal Securities Exchange Commission.

Testifying during Quiros’s trial is part of Stenger’s pact with the SEC.