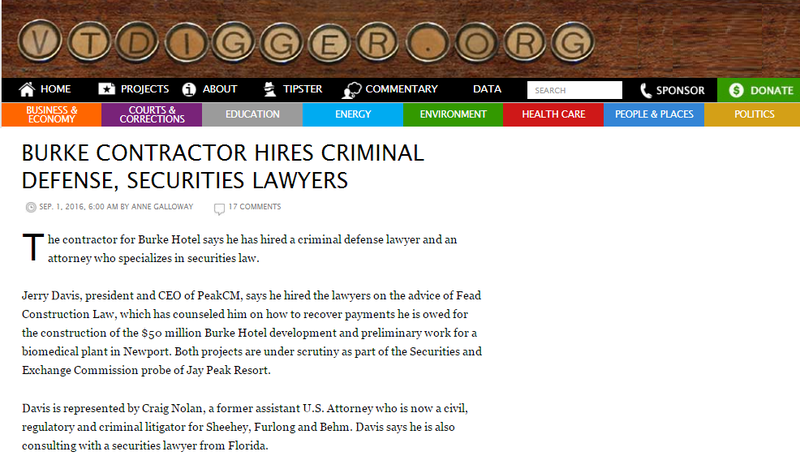 The contractor for Burke Hotel says he has hired a criminal defense lawyer and an attorney who specializes in securities law.

Jerry Davis, president and CEO of PeakCM, says he hired the lawyers on the advice of Fead Construction Law, which has counseled him on how to recover payments he is owed for the construction of the $50 million Burke Hotel development and preliminary work for a biomedical plant in Newport. Both projects are under scrutiny as part of the Securities and Exchange Commission probe of Jay Peak Resort.

Davis is represented by Craig Nolan, a former assistant U.S. Attorney who is now a civil, regulatory and criminal litigator for Sheehey, Furlong and Behm. Davis says he is also consulting with a securities lawyer from Florida.

Davis says he is cooperating with the SEC and is doing his best to answer questions from investigators “about how the money trail goes.” He wouldn’t comment about whether the U.S. Attorney’s office in Burlington was involved except to say “all I can say is we get comments from almost everybody.”

“You know all the government agencies involved in all the rest of it,” Davis said. “Some of that I can’t get into. Obviously, they are looking at how the funds were paid and from where.”

When the SEC allegations and mirror charges by the state were announced in April, Vermont Attorney General Bill Sorrell told the press that the U.S. Attorney’s office in Burlington would be investigating potential criminal charges associated with the SEC case against the Jay Peak developers Ariel Quiros and Bill Stenger.

Davis says the questions from federal investigators have been “pretty standard, pretty routine.”

“No one has told us that we’ve done anything wrong or that there’s any issue or any of that kind of stuff,” Davis said. “They’re trying to follow how the ownership or how the developers have paid for funds and how that money trail goes.”

“We’ve given them every bit of information we have and you want someone who is experienced in those areas so when we’re getting requests for stuff if it’s something Sandy [Fead] understands in construction law that’s fine, if it’s something dealing with something else we’re trying to get those answered,” Davis said.

Nolan said he couldn’t comment. By email, after this story was first published, he wrote that “legal counsel is typically hired by sophisticated clients when they become witnesses in litigation or investigations.”

Eric Miller, the U.S. Attorney in Burlington, would not confirm or deny that there is an investigation. SEC officials also declined to comment.

Burke Hotel and AnC Bio Vermont part of Bill Stenger and Ariel Quiros’ redevelopment plan for the Northeast Kingdom using $440 million in EB-5 immigrant investor funds. In April, the SEC and the state of Vermont charged the two men with misusing $200 million of the investor funds.

Davis was the project manager for several projects at Jay Peak for DEW Construction before he split off from the company in December 2011 and started his own firm, Peak CM. His first project with Stenger and Quiros was the Mountain Learning Center at Jay Peak.

Davis said he worries about fallout from Jay Peak affecting his business. Davis has 20 staffers to employ and a company to maintain.

“We just want to be up front and try to get work,” Davis said.

Davis says since the fraud scandal at Jay Peak broke, he has taken a hit financially, and consequently, he has had to reduce staff from a total of 30 last year to around 20 employees this summer.

Last fall, Davis complained that state oversight of the Burke Hotel project was making it difficult for him to pay subcontractors.

In the spring of 2015, the Department of Financial Regulation agreed to allow the Burke development, which had been suspended by the Agency of Commerce and Community Development, to move forward. Under a special agreement, funds were held in escrow and developers were required to seek approval for construction payments through a third party administrator. Payments for construction to PeakCM were delayed by 30 to 60 days, Davis told VTDigger last fall. State officials said the real issue was not the approval process — it was the fact that the developers had run out of money.

Davis complained publicly at the time that he was unable to pay local subcontractors in a timely way. When construction was completed in December, he said he was owed about $5.4 million. Davis said earlier this month there was still more than $4 million owed to PeakCM for subcontractors and construction management fees after the SEC seized ownership of the property in April. The SEC receiver has allowed the subcontractors to file a separate lien request totaling $3.7 million with the federal court in Miami. Davis says he is also owed $2 million for preconstruction work for AnC Bio Vermont.

In October 2015, at the same time he was chiding state officials about late payments, Davis purchased a 41-foot Sea Ray yacht valued at more than $500,000, according to registration and sales information obtained by VTDigger. He also purchased a 53.5 foot yacht in May through one of his companies, records show. Davis says he has one boat now that he holds a mortgage on that is leased to a charter company.

Since December 2011 when Davis formed PeakCM, he has opened two offices, one in Winooski and another in Orlando. He purchased a home in Orlando and put an addition on his home in Williston, which was put on the market this summer. Davis is also part owner of the $11 million Hampton Inn development in St. Albans, now under construction. Public records show Davis has formed a number of companies, including PCM Food Services, 7415PV LLC, PCM Development LLC, 41WTC, 364 VT Route 15 LLC, PeakCM Ventures and 43 Lake Street LLC.

Davis says his accountants and lawyers have recommended that he start the new companies.

He formed PCM Food Services to buy into a food franchise business, he said. 7415PV LLC is a company he formed to rent out his house in Orlando, Davis says.

“The problem is, you almost get in a fight between the CPAs and the legal people,” Davis said. “If it was me, I’d just have one company, but every time you go to something that’s slightly different, they want you to have a separate company, so i’m just going off of what my real estate attorneys and CPAs say, that’s all.”