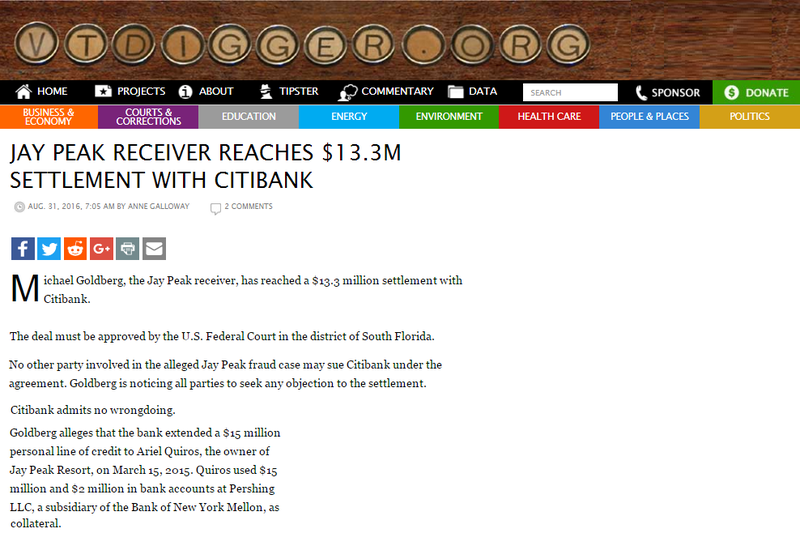 Michael Goldberg, the Jay Peak receiver, has reached a $13.3 million settlement with Citibank.

The deal must be approved by the U.S. Federal Court in the district of South Florida.

No other party involved in the alleged Jay Peak fraud case may sue Citibank under the agreement. Goldberg is noticing all parties to seek any objection to the settlement.

Goldberg alleges that the bank extended a $15 million personal line of credit to Ariel Quiros, the owner of Jay Peak Resort, on March 15, 2015. Quiros used $15 million and $2 million in bank accounts at Pershing LLC, a subsidiary of the Bank of New York Mellon, as collateral.

Citibank contends the amounts drawn by Quiros under the line of credit have not been repaid, and the Miami businessman is in default, Goldberg writes. Citibank has not been able to recover the funds through legal action because of a freeze order placed on Quiros as part of allegations made by the Securities and Exchange Commission filed with the court in April.

Quiros and his business partner, Bill Stenger, the CEO of Jay Peak Resort, have been accused by the SEC and the state of Vermont of misusing $200 million. Of that amount, Quiros allegedly used $55 million as his “personal piggybank.”

Goldberg writes that the $17 million in collateral accounts are the property of Jay Construction Management and QRI, two companies run by Quiros that are now part of the receivership.

Goldberg claims the money was improperly diverted by Quiros from EB-5 investor funds and has demanded that all of the funds be turned over to the receivership.

Citibank disputes Goldberg’s claims and has “indicated its intention to defend any such claims vigorously.”

To avoid litigation, the receiver and the bank began to discuss a settlement in May 2016.

Citibank agreed to settle with Goldberg this week, “without any admission of any liability.”

The total amount represents a 78 percent recovery of the funds in the collateral accounts. Citibank is giving up nearly all of the collateral for a line of credit that is in default, Goldberg writes.

As part of the deal, Goldberg will request from the court a lift of the asset freeze on the collateral accounts. Distributions to Quiros would be made with 30 days’ notice to Citibank. Goldberg will establish a claims process for EB-5 investors and other parties, such as the contractors who have not been paid for work performed at Jay Peak and Burke Mountain resort.

About $10.8 million will be used to make payroll for 500 employees at Jay Peak, pay trade vendors who are owed $5 million in past due accounts, and make necessary repairs (the resort must make $4.9 million in repairs to the aerial tram).

“The liquidity provided by this payment of $10,800,000 is necessary for continuing operations of the Jay Peak resort,” Goldberg writes. “Without this liquidity, a substantial risk exists that the Jay Peak resort will cease to operate as a going concern, this impairing its value upon sale — and the ultimate return to EB-5 investors as liquidation values are generally significantly less than going-concern values.”

Investors and other creditors will be able to file a claim against the receivership after a claims process is established, Goldberg writes, “and by having a more valuable asset — namely a resort that can be sold as an operating resort and a going concern.”

The deal is contingent on “global peace.” In order for the settlement to go through, Citibank is seeking assurances that no claims can be asserted against the bank related to the SEC action or the receivership.

To that end, the receiver is giving all affected parties, investors and creditors, an opportunity to object to the settlement and participate in a hearing.

Goldberg is serving notice by email, mail and advertisements in the Burlington Free Press and VTDigger.