After Delays, Hotel at Center of Fraud Investigation Set to Open in Vermont 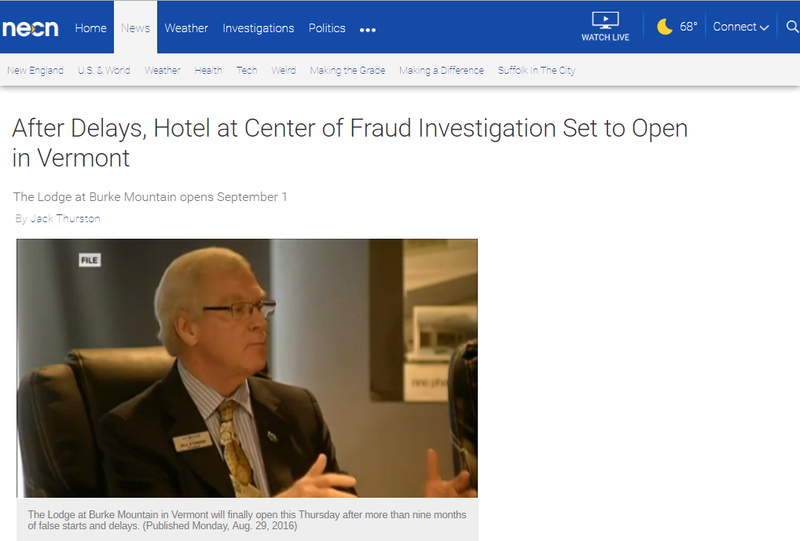 After more than nine months of false starts and delays, the Lodge at Burke Mountain is finally opening this Thursday.

The hotel and conference center, with its stunning views of Vermont's Northeast Kingdom, is one of several projects at the center of a bombshell federal fraud investigation that was announced earlier this year.

"It's a sigh of relief," Jess Sechler of Burke Mountain said about the long-awaited opening of the hotel. "Everybody cares about the success of this."

The Securities and Exchange Commission said this spring that the businessmen behind redevelopment projects at Jay Peak, Burke Mountain, and in the city of Newport were accused of operating a Ponzi-like scheme.

Quiros was accused of diverting tens of millions of those investors' dollars to his personal accounts. He allegedly used the funds inappropriately to acquire a luxury condo in New York City, to pay personal taxes, and to fund the purchase of Jay Peak.

In court filings, the developers have repeatedly denied any wrongdoing and have said they are confident they will be cleared of the civil charges.

A federal court-appointed caretaker now in charge of the resorts prioritized opening the lodge in time for fall foliage, when the Kingdom is busy with leaf-peepers and outdoors recreation enthusiasts.

"It's kind of that confidence builder not only for the staff internally, but even for the community, trusting, 'Wow, they really did open it,'" Sechler said of Thursday's opening.

"Soft" openings have taken place on two weekends this month, Sechler noted, explaining that Thursday is when 7-day-a-week operations start at the hotel, its pub, and other amenities.

Lilias Ide, who promotes the region's famous mountain biking amenities at the Kingdom Trails Association, said many at the base of Burke Mountain are hoping for a business boost from hotel guests and conference attendees.

"Perhaps it will bring a different type of demographic," Ide said. "It benefits us to have them there. They're heading up to the hotel, but they come down here to check us out."

Ide described Burke Mountain as a treasured landmark that has a family feel, adding that many in the Northeast Kingdom are hoping the mountain has long-term success and stability.

The federal receiver now in charge of Burke and Jay Peak has said he expects, ultimately, the two resorts will be sold.

To mark its opening, Burke is holding a community celebration this Saturday afternoon, with tours, live music, and tours for the public. That celebration is scheduled for 3-6 p.m.