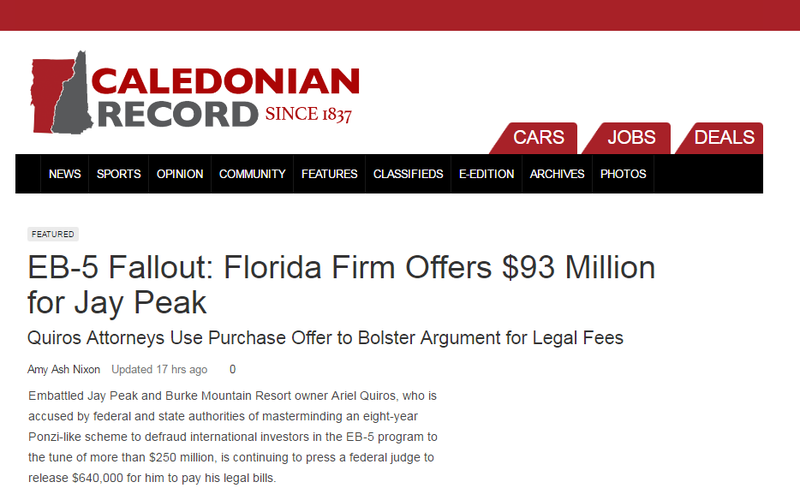 Embattled Jay Peak and Burke Mountain Resort owner Ariel Quiros, who is accused by federal and state authorities of masterminding an eight-year Ponzi-like scheme to defraud international investors in the EB-5 program to the tune of more than $250 million, is continuing to press a federal judge to release $640,000 for him to pay his legal bills.

Quiros, and his business partner, Bill Stenger, were accused in mid-April by the federal Securities Exchange Commission (SEC) and the Vermont Attorney General of having misappropriated more than $200 million of the investments made through the EB-5 program, which saw hundreds of immigrant investors pledge $500,000 in the economic development projects the pair proposed.

The EB-5 program allows foreign investors to earn permanent green cards after jobs are created or preserved through their investments in projects.

In late May, the U.S. District Court in Miami, Fla., where the SEC case is based, granted Quiros’s first motion for attorneys’ fees, ordering that he could sell or mortgage his Setai Condominium in New York City, to pay the legal fees he had incurred to that time.

Quiros’s attorneys are seeking access to those funds now to pay the first two months of legal fees, through the end of June, for teams of lawyers from New York to Florida, Vermont to California, who are defending him in the complex cases in both federal court in Miami and in Vermont, in the Washington County Superior Court in Barre.

Both the SEC and Michael Goldberg, the federal receiver appointed to oversee the assets in the eight partnerships Quiros headed, mostly through Jay Peak Resort, are arguing against the funds being tapped into for Quiros’s legal fees.

Quiros’s attorneys say the government is depriving Quiros of defending himself if he cannot use the funds from the condo he was allowed to mortgage to pay his legal debts; most of his assets remain frozen by the federal government.

“If Mr. Quiros cannot pay for the defense of the numerous cases against him - including the lawsuit filed by the receiver - he will suffer costly default judgments,” Quiros’s attorneys argue in a motion filed Monday.

Quiros’s attorneys write, “The litigation against Mr. Quiros threatens his entire livelihood, and it would be manifestly unjust to prevent him from mounting vigorous defenses. The government should not be allowed to use its superior resources to force Mr. Quiros into submission.”

The attorneys for Quiros argue that their client was allowed to mortgage the Setai condo, and has now done so, and now the court needs to specify the amount to be paid from the mortgage proceeds for him to pay his legal defense bills.

The SEC had opposed the Setai condo being leveraged and funds used for the legal fight, arguing that the luxury condo was bought using investor funds in the very case Quiros is embroiled in.

Quiros argued that the condo was not bought with investor funds at the time.

More than $1 million from the mortgaging of the Setai condo has been transferred to the receiver, the filing this week states.

The SEC alleges that Quiros personally benefited from more than $55.5 million in excess fees charged to the investors whose money fueled the $350 million empire known as the Northeast Kingdom Economic Development Initiative.

Offer Made on Jay Peak

In Quiros’s latest appeal to the court, his attorneys argue that his assets more than triple the amount of the SEC’s $55,510,871 claim against him, and includes Jay Peak Inc., which Quiros’s attorneys say a buyer has offered recently “…in writing, to pay $93 million.”

“Accordingly, there are more than enough assets available to satisfy any judgment against Mr. Quiros, and thus there is no logical reason why he should not be able to access his own assets to defend himself,” argue his attorneys.

Efforts to reach Goldberg, the receiver, about the recent offer on Jay Peak were not successful by press time on Thursday.

In Quiros’s motion, his attorneys note, “For reasons that are unclear, the Receiver has not disclosed to this Court the offer to purchase Jay Peak Inc. for $93 million. To say the least, the offer seriously undercuts the Receiver’s argument that ‘the receivership estate is in a precarious financial position.’ ”

A seven-page document detailing the offer of Bellwether Asset Management of Boca Raton, Fla., is included in the motion on Monday arguing that Quiros should be given access to some of his unfrozen assets to pay his legal bills.

No one answered the phone at Bellwether on Thursday afternoon.

The proposal, which is not dated, is a letter of intent to purchase shares and associated assets of Jay Peak, payable in two installments, the first at closing, in the amount of $60 and the remaining $33 million “once complete control of the property is given to the purchaser.”

Goldberg, in his first interim report to the court since being appointed receiver, noted that Jay Peak is expected to lose more than $6 million during the off season.

Quiros’s attorneys claim the receiver and the SEC are “attempting to use their superior resources to leave Mr. Quiros defenseless.”

His attorneys argue that the receiver and the SEC’s opposition to allowing Quiros to use proceeds from the mortgaging of his Setai condo are “attempts to hold Mr. Quiros guilty until proven innocent.”