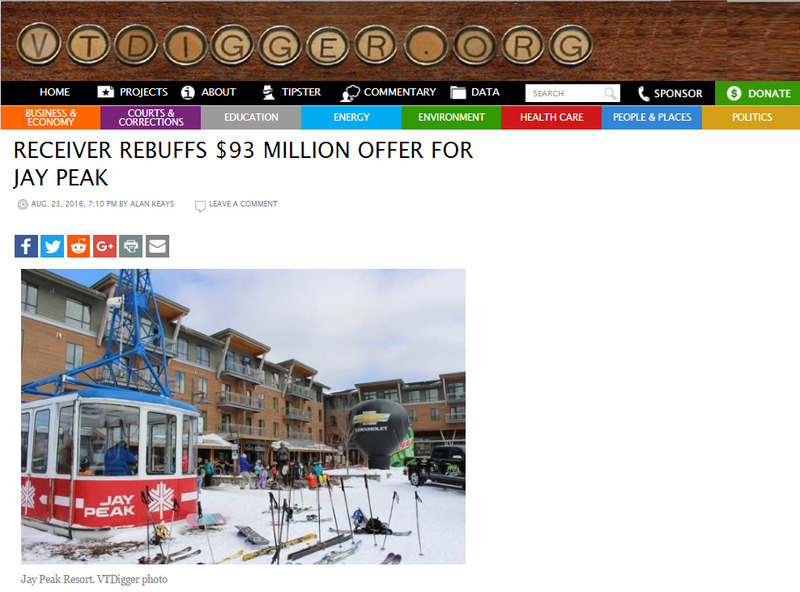 A bid has been made to purchase Jay Peak Resort for $93 million, but the person who is overseeing the property through receivership said it is not for sale.

A seven-page document was filed in a Miami federal court Monday as part of a Securities and Exchange Commission civil fraud case against Bill Stenger and Ariel Quiros, the developers of Jay Peak and other projects in the Northeast Kingdom. The filing, under the letterhead of Bellwether Asset Management, is titled “Letter of Intent to Purchase Shares and Associated Assets.”

The document outlines steps for Bellwether to buy Jay Peak Inc. from Q Resorts, a holding company run by Quiros.

The properties are in receivership, and a federal judge would have to approve any sale. The offer from Bellwether is not under consideration by Michael Goldberg, the resort’s court-appointed receiver.

“The property is not being sold to Bellwether. We’re not even selling it at this point,” Goldberg said in an email Tuesday. “It was an unsolicited offer.”

The filing stated that if the parties agreed to steps outlined for the sale, they were to sign the document by the close of business Aug. 5 and send a copy to the address of Bellwether in Boca Raton, Florida.

The document also includes signature lines for Jean Joseph, listed as a director at Bellwether Business Group, and Quiros, CEO and president of Q Resorts. Neither party signed the document filed in court Monday.

The filing, while written under Bellwether Asset Management letterhead, lists Bellwether Business Group, with an address at 7900 Glades Road, Suite 530, in Boca Raton, as the would-be purchaser.

A Bellwether Asset Management company is listed as based in California, while a company named Bellwether Business Group is registered in Nevada.

A Henry W. Johnson in Florida, according to a public records search, is associated with more than 40 corporations, including at least seven with the same Boca Raton address.

The company names at that address include Shangri-La Investment Corp., Leonardo Corp. and International Escrow Co. 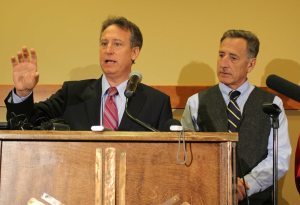 Michael Goldberg, left, the court-appointed receiver for Jay Peak, and Gov. Peter Shumlin at a news conference at Jay Peak.

Goldberg, in his role as receiver, has the authority to act as the owner of Jay Peak Resort. It’s a post he has held since April, days after the Securities and Exchange Commission alleged that Stenger, CEO and president of Jay Peak, and Quiros misused $200 million in funding from immigrant investors.

In the federal EB-5 visa program, investors put up at least $500,000, along with a $50,000 administrative fee, and in exchange were promised temporary green cards and eventual permanent U.S. residency.

For eight projects, six of which are at Jay Peak, Stenger and Quiros received $440 million in funds and fees from EB-5 investors.

The cases against Stenger and Quiros remain pending.

The document filed in the case Monday called for the $93 million purchase price to be paid in two installments, with $60 million due at closing and $33 million due once the property had been turned over to Bellwether.

The document states Bellwether would purchase all 9,232 “outstanding” shares of Jay Peak Inc. and “all the buildings, land, etc. therein.”

However, an attachment to the filing, “Exhibit A,” that outlines the “associated assets” that would be part of a sale omits some big ticket items, including Hotel Jay.

The document does list about 60 other assets, starting with “all rights associated with the name ‘Jay Peak Ski Resort.’”

Also part of the proposed sale were leasing rights to the state airport in Newport, government permits and any files or records pertaining to the operation of the business.

Valuations of the Jay Peak ski area — not including the EB-5 capital projects — have varied. Quiros says it is worth close to $87 million, based on an appraisal from last year. An economist for the SEC has set the value at $41.6 million.

The document outlining the proposed sale says both parties would pay for their own legal expenses, except for the consulting fees and closing costs, which would be paid by the seller.

One consulting fee would be 1.5 percent of the purchase price. It would be paid to Midra Management & Consulting, and due at closing.

Another consulting fee of 1.2 percent would be paid to Treasure Union Investment Ltd., also due at closing.