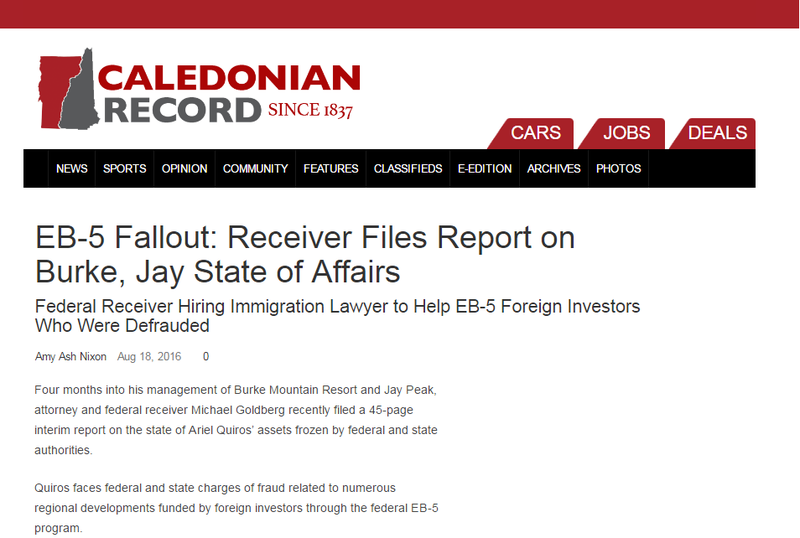 “Cash flow projections indicate that Jay Peak resort will lose approximately $6.5 million this off season,” Goldberg’s report to the U.S. District Court in Miami notes. The resort had no money set aside for the off-season, Goldberg said, and a $4.9 million repair to the resort tram - ordered by the state - have further exacerbated financial pressures.

Goldberg noted that off-season biweekly payroll for the resorts has been cut from about $700,000 to $500,00. Some jobs have been eliminated to help control costs.

In addition to the cash shortfalls in operations, $5.1 million is owed to trade vendors, between the Burke Mountain and Jay Peak resorts, Goldberg details in his recent report. He says he is planning to start paying those bills when the season starts and cash flow improves.

Debt to the contractors who built the hotel at Burke is now about $3.6 million, Goldberg notes. He says that controls the State of Vermont put in place as the investigation was underway last year prevented Quiros “from illegally diverting money from AnC Bio and other partnerships into the Q Burke partnership. Thus, Quiros was no longer able to steal the funds necessary to pay all of the contractors who built the Q Burke.”

Liens the contractors have against the hotel preserve their rights to be paid, but Goldberg said he hopes to be able to start paying them when “he has sufficient liquidity, but at the very latest from the proceeds of the sale of the Q Burke.” He notes that hotel is set to open Labor Day Weekend.

He remains optimistic that the hotel can operate profitably once open.

Goldberg is working to protect the rights of hundreds of allegedly defrauded investors in the EB-5 program and is hiring an attorney in Washington D.C. to help with the investors’ immigration worries, he notes in his interim report.

The federal Securities Exchange Commission and the Vermont Attorney General, say Ariel Quiros masterminded a “ponzi-like” scheme, and it was carried out allegedly since 2008 at the hands of Quiros and his business partner, Bill Stenger.

Stenger is cooperating with authorities and expected to reach a settlement, while a trial is anticipated for Quiros starting in the fall of 2017, court documents show.

Authorities allege that more than $200 million in EB-5 investor funds were misappropriated, and that Quiros alone also personally took and used another $50 million-plus in investor funds.

More than 800 investors pledged $500,000 each for the eight partnerships connected with Quiros’s now collapsed empire, and the green cards of hundreds of those people are now in jeopardy.

He says that during his investigation, he “discovered how funds pledged by investors in the receivership entities were transferred to the Q Burke entities and how more than $4.6 million from Q Burke LP was improperly transferred to (two other entities in the alleged scheme) …to pay expenses that were not associated with with Q Burke LP.”

The EB-5 program is set to expire later this year, and Congress, notes Goldberg, is “considering rewriting the EB-5 statutes to deal with instances of fraud among other issues.”