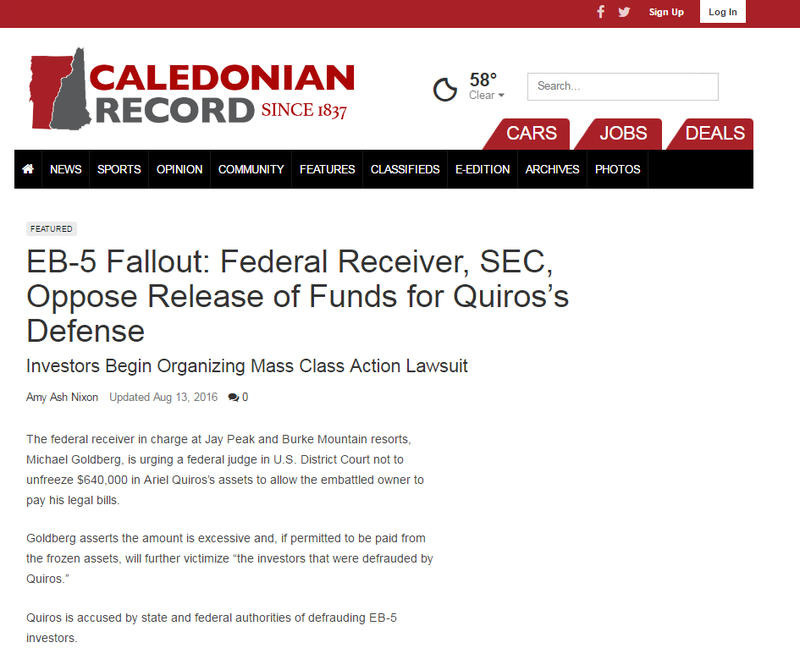 The federal receiver in charge at Jay Peak and Burke Mountain resorts, Michael Goldberg, is urging a federal judge in U.S. District Court not to unfreeze $640,000 in Ariel Quiros’s assets to allow the embattled owner to pay his legal bills.

Goldberg asserts the amount is excessive and, if permitted to be paid from the frozen assets, will further victimize “the investors that were defrauded by Quiros.”

Quiros is accused by state and federal authorities of defrauding EB-5 investors.

Goldberg says the resorts are struggling with debts left by Quiros, including approximately $5 million still owed to the contractor and subcontractors who built the new hotel and conference center at Burke Mountain.

In his motion, Goldberg asks the court to delay ruling and to reduce the bills to the same rates being paid to the people who are “charged with cleaning up his mess.” He is asking for an evidentiary hearing before any more legal bills are allowed to be paid from the receivership assets.

The SEC is also lobbying against the judge releasing the funds for Quiros to pay his attorneys, according to documents filed in U.S. District Court in Miami, Florida, this week.

In mid-April, Quiros and his partner Bill Stenger, were implicated in an alleged securities fraud scheme. Federal Securities Exchange Commission officials and the Vermont attorney general say the pair defrauded investors in the EB-5 program across their seven investment partnerships dating back to 2008.

All told, Quiros is seeking more than $1 million in funds be released from his frozen assets to cover legal bills, according to the SEC opposition filed this week. The SEC argues that “the amount sought is greatly excessive, and at this rate, Quiros is quickly squandering investor funds.”

“Quiros has failed to show how payment of more than $640,000 to his lawyers to defend numerous cases benefits defrauded investors, since he would use an asset purchased with investor funds (the Setai Fifth Ave Condominium) to pay his attorneys’ fees and expenses,” the SEC argues in its recent opposition, the same argument it made over earlier legal bill claims. The rates Quiros’s attorneys are charging, the SEC argues, are excessive, and fully double what the receiver, Goldberg, is billing for his work, to try to preserve assets for the hundreds of allegedly defrauded investors.

In late May, the court authorized Quiros to sell or mortgage the condo in question, and later, Quiros placed a $1.2 million mortgage on the Setai condominium and the funds were wired to the receiver. They are now being held in trust, according to the motion filed this week by Goldberg.

Quiros faces a total of seven civil actions, plus one criminal investigation, in connection with his alleged scheme through the Northeast Kingdom Economic Development Initiative. The efforts promised thousands of new jobs, and an economic revitalization in the rural, struggling Northeast Kingdom.

Some of the promised projects have been completed, while others were doomed from the start, the SEC alleges.

The federal court judge in recent days approved the borrowing of $1.5 million from a settlement the State of Vermont reached with Raymond James & Associates, which was implicated in being a conduit in the alleged Ponzi-scheme. The funds will be used to help keep Jay Peak running, and to meet payroll, and cannot be used to pay the salary of Stenger, who remains on board at Jay, recent court filings state.

Also posted on the federal receiver’s website late this week is a memorandum to Jay Peak and Q Burke investors regarding a federal class action lawsuit pending before another federal judge in the Southern District of Florida, on behalf of 836 individuals who invested in projects at the two ski resorts. The suit is awaiting certification by the court, the memo from the investors’ lawyers notes.

“In the event a class of investors is certified, each investor would have the opportunity to recover in the litigation or to ‘opt out’ of the class, persevering their right to pursue individual claims,” the update from the hoped-for class action suit’s lawyers advised. “The class’s attorneys would apply to the Court to be paid from money they recover, and so the class members do not pay any attorney’s fees or expenses up front or prior to a recovery.”