Tracks from railroads' past seen as path to future. 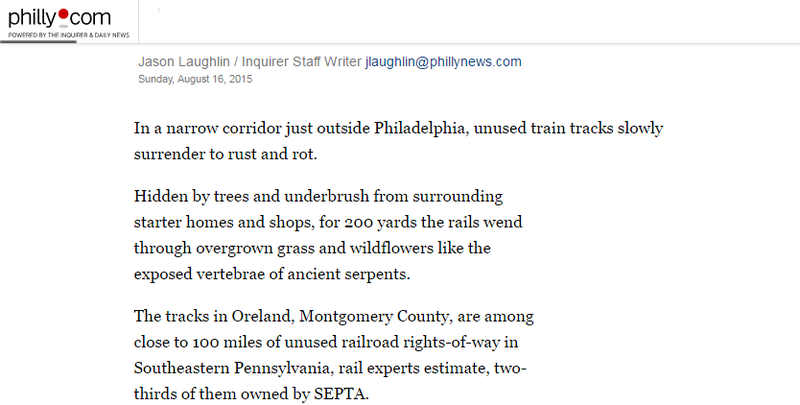 In a narrow corridor just outside Philadelphia, unused train tracks slowly surrender to rust and rot.

Hidden by trees and underbrush from surrounding starter homes and shops, for 200 yards the rails wend through overgrown grass and wildflowers like the exposed vertebrae of ancient serpents.

The tracks in Oreland, Montgomery County, are among close to 100 miles of unused railroad rights-of-way in Southeastern Pennsylvania, rail experts estimate, two-thirds of them owned by SEPTA. 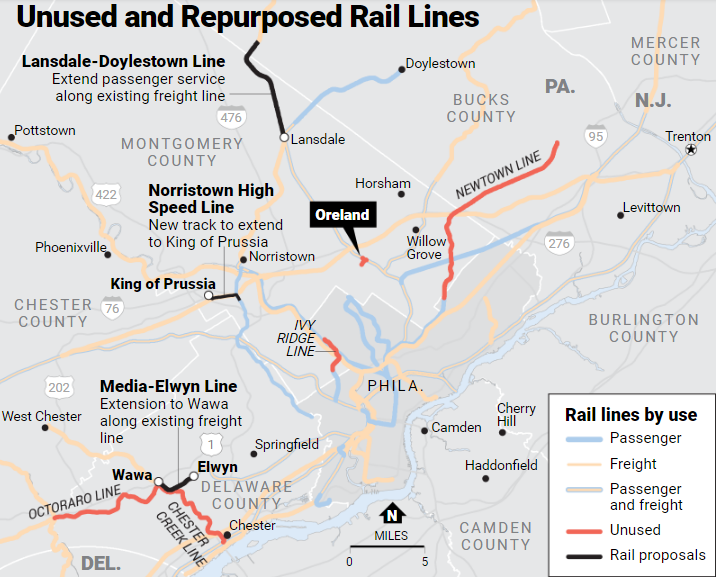 A century ago, these corridors were the backbone of the region's economy. Now, they are increasingly important answers to transportation problems.

For the first time in more than 30 years, SEPTA is taking steps to reactivate a fallow stretch of rail from Elwyn to Wawa and is considering reopening another line in northern Montgomery County to passenger trains. A resurgent freight rail industry sees its inactive tracks as valuable investments. Meanwhile, trail builders are using these forsaken assets to create a cyclist and pedestrian network that is among the most ambitious in the country. 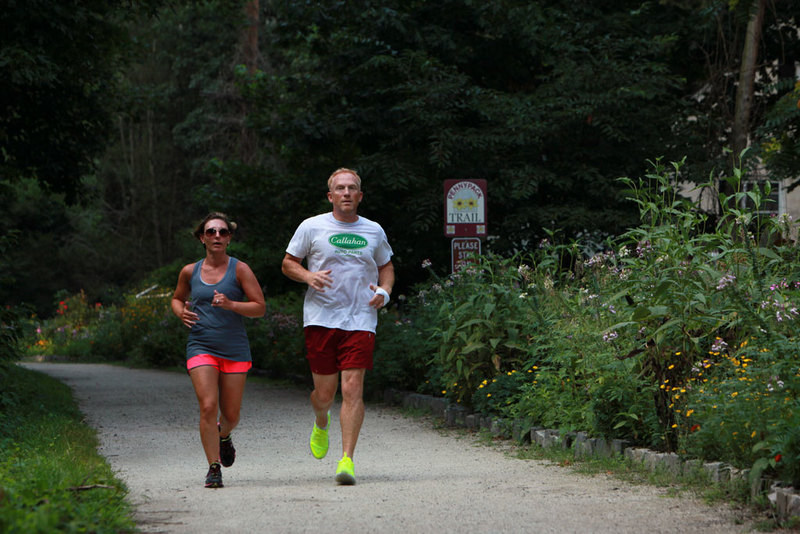 At the end of the 19th century, Pennsylvania had one of the nation's most active rail networks.

"Unless you had cars or you wanted to travel really slow with your horse and wagon, trains were it," said James Innes, a Cheltenham resident and rail enthusiast who has been active in developing rail routes into trails.

The railroad companies were aggressive competitors, said Robert Thomas, a Philadelphia architect who culls old maps and deeds for rail routes that can be used as trails.

"Whenever you have development, there's a fever," he said.

Railroad companies courted customers by building lines near each other. The Manayunk Bridge, once part of the Pennsylvania Railroad system, carried tracks that were almost parallel to those of the Norristown line, which once belonged to the competing Reading Railroad.

Redundancy hurt the industry. In the 1920s, an increase in paved roads made trucks a viable shipping option, Thomas said. The Eisenhower administration invested in highways in the 1950s, boosting American car culture. 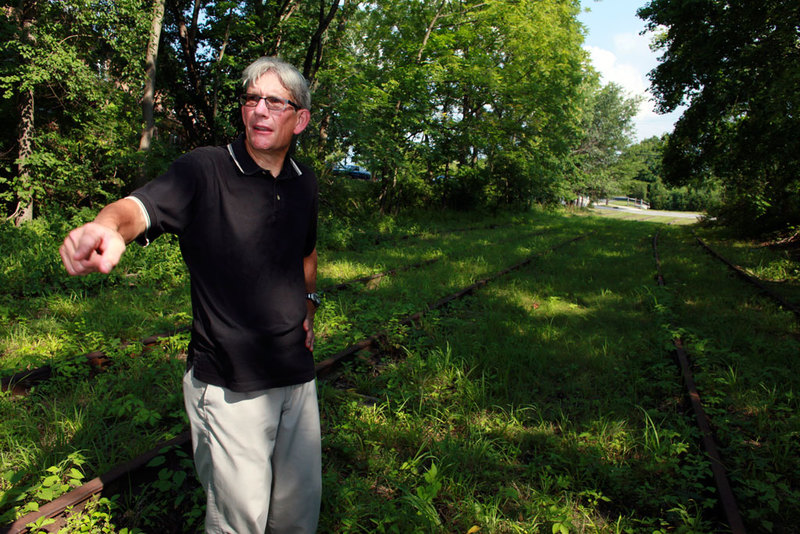 Rail service in this region took a blow as late as the 1980s. The Center City commuter tunnel linked for the first time the old Pennsylvania and Reading railroads, Thomas said — but the diesel engines that serviced parts of Montgomery, Bucks, Berks, and Schuylkill Counties couldn't run through tunnels due to their toxic exhaust. Those areas lost train service.

At the height of rail service in 1920, companies operated 11,500 rail miles in the Keystone State, according to American-Rails.com. Now there are about 5,000 miles.

The tracks in Oreland have not been active since the 1950s, Innes said. They were once busy with trains hauling limestone from nearby quarries that have since closed.

Reactivating an unused line usually requires replacing the old tracks, if any are still left — it's the land, not the hardware, that's valuable. Rail rights of way are fiercely held by SEPTA and commercial rail companies because getting land for rail expansion is expensive and difficult. SEPTA's last major right-of-way purchase, 1.6 miles of the City Branch in Philadelphia, cost $8.5 million in 1995.

The benefit of keeping rights of way is evident in a comparison of two active projects. SEPTA estimates that a 3.4-mile expansion of the West Chester Line along a right of way it owns from Elwyn to Wawa would cost $80 million to $100 million. A five-mile extension of the Norristown High Speed Line to King of Prussia, which will require the acquisition of a new right of way, is expected to cost $650 million.

SEPTA also is studying putting passenger trains on a part of the Bethlehem branch in Montgomery County now used only by freight trains.

Some of the region's rail routes get reborn for other uses. Utilities like PECO buy rail rights of way and install power lines along them. The region's bicycle trail system is largely built on paths cleared for trains. A Delaware Valley Regional Planning Commission study of traffic on bike trails found 1.4 million bicycles used the area's five biggest trails in the last year.

Groups such as Rails-to-Trails Conservancy and the Bicycle Coalition of Greater Philadelphia are building a regional 750-mile trail circuit. Of the 300 miles finished, 75 percent was once railroad, said Tom Sexton, director of Rails-to-Trails Northeast Regional Office.

"It's the most well-planned-out build-out of a metro multiuse trail in America," he said. 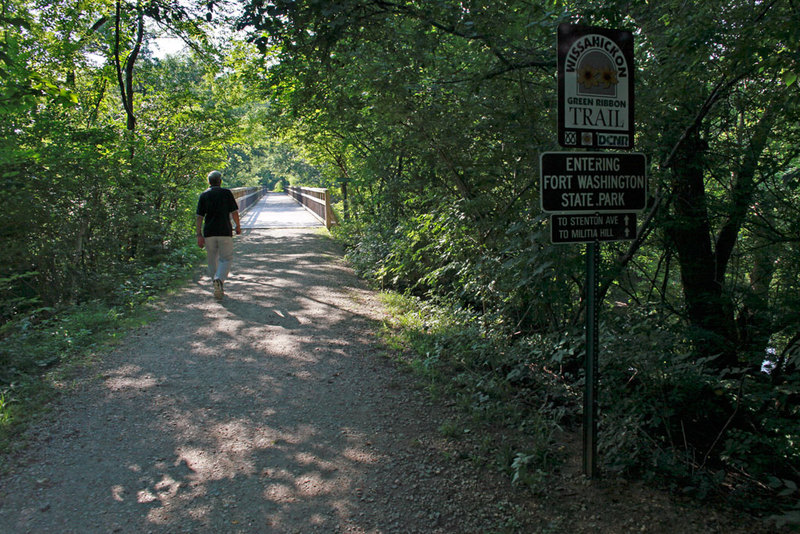 "We would prefer that someone is using it," said Byron Comati, SEPTA's director of strategic planning, adding that "preservation of it is in everyone's best interest."

Obtaining rights of way not controlled by SEPTA can get challenging, Thomas said. Short railroads, particularly, can have a convoluted trail of ownership. And there are some inactive tracks that are not available to trail builders. Commercial railroad companies are experiencing a renaissance, said Dave Pidgeon, spokesman for Norfolk Southern, one of the big freight carriers in the Northeast. Their business model depends on being able to serve customers quickly by offering rail service when demand arises, such as when a new factory opens. 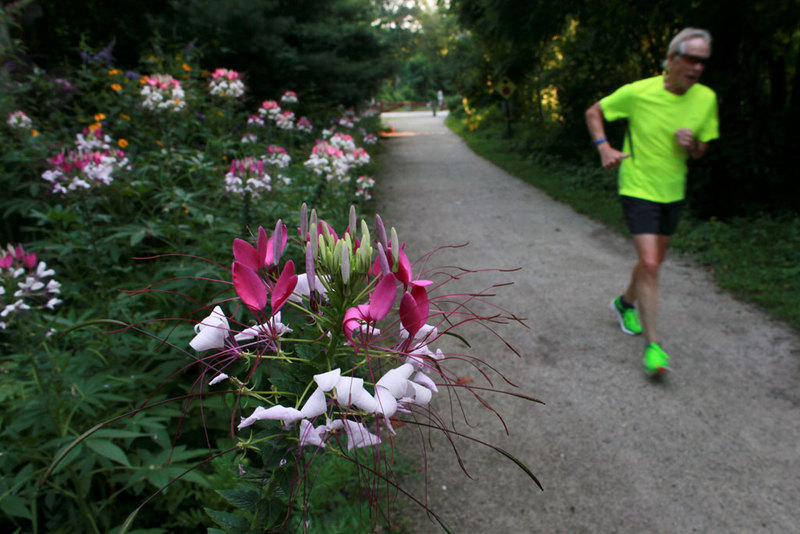 "That's why in today's climate we, generally speaking, want to hold on to the lines that we have as much as possible," Pidgeon said.

After visiting the unused tracks in Oreland, Innes, the rail enthusiast, went to a welcoming, sylvan path in Springfield built on an old railroad bridge. An avid biker, he said that riding on an old rail route is a way to touch history.

"You become fascinated," he said, "with what was here before."