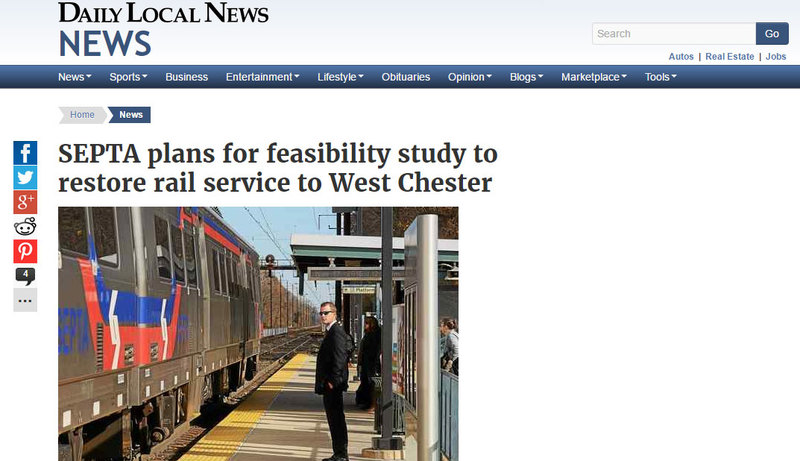 If someone was interested in hopping aboard a train in West Chester, they would have to do it for just a trip down memory lane instead of commuting somewhere.

However, that may change.

The Southeastern Pennsylvania Transportation Authority (SEPTA), in the middle of laying out its five-year financial plan and 2017 budget, is planning to do a feasibility study about restoring rail service to West Chester.

“As far as I know, the Pennsylvania Department of Transportation is funding the study to review the capital cost … for restoring the rail service to West Chester,” said James Cullison, of SEPTA. “The study is definitely in the plans.”

The study, listed under SEPTA’s project descriptions, will work with the Pennsylvania Department of Transportation (PennDOT) and the Advisory Committee to Reestablish Rail Service to West Chester.

West Chester’s last commuter train ran in 1986, even after the Market Street station was demolished in 1968.

Since that time, the tracks, which can still be found running through the borough, into West Goshen and Westtown, are currently home to the West Chester Railroad.

The nonprofit, all-volunteer West Chester Railroad Heritage Association runs a few trains throughout the year for nostalgic and historic purposes, traveling from Market Street down to Glen Mills.

A few miles down the track from the Glen Mills station, SEPTA’s Media/Elwyn line picks up, but soon that will change with the addition of another station.

Currently, SEPTA plans to restore three miles of track to Wawa in Delaware County, which will be the new terminus for the line. The project, budgeted at $150.6 million, will begin construction in 2017 and should be completed by 2020.

The tracks from Wawa to West Chester run 9.4 miles.

The Delaware Valley Regional Planning Commission (DVRPC) estimates the restored service would attract almost 2,000 passengers for weekday trips by 2035 and capital cost estimates by the borough believe it would range between $100.3 million to $111.9 million.

SEPTA held a public hearing in West Chester on Thursday at the borough’s municipal building, where a handful of residents came out to voice their approval of bringing rail service back to the area.

Residents wishing to comment on the West Chester restoration and the feasibility study can send messages through SEPTA’s website at www.septa.org/notice/2016-04-fy2017-op-budget-hearing.html until May 4.

“We appreciate seeing the feasibility study,” said Jordan Norley, vice president of the West Chester Borough Council. “There has been a tremendous following for this project. We appreciate (SEPTA) listening.”

SEPTA’s board will meet May 26 to accept the final budget and five-year financial plan.