Bring back trains, some in West Chester urge 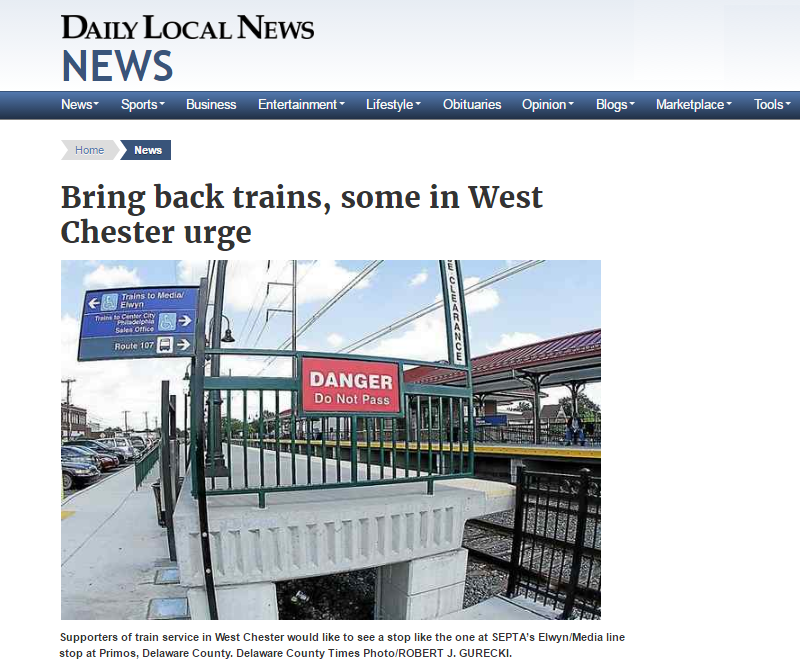 As it sits, the Market Street train station gives little indication it once carried heavy traffic to and from Philadelphia.

But some residents and Borough Council are expressing a restored faith in the regional rail by laying the tracks for a committee to examine returning service to West Chester.

“For 50 years I know people have been longing to get the train route back into town,” said Councilman Bill Scott.

Last week, council voted to advertise an ordinance that would establish a Committee to Reestablish Rail Service to West Chester.

Scott said for years residents have written letters and council previously passed resolutions in support of returning rail service to the borough.

“The difference this time, the approach is different,” Scott said. “This is going to be a long term committee and the object is not to come to any technical conclusions or any sort but basically to keep an eye on the powers that be.”

The committee is proposed to be comprised of seven members appointed by council with terms of three years each. At least three members are to be borough residents.

According to the proposal, the purpose of the committee would be to cause reestablishment of rail service to the borough as soon as possible.

This would be done through compiling information and data on issues related to the rail service as well as preparing a history and acting as advocates for the return of service by attending appropriate meetings and reaching out to local groups and organizations.

The committee will also be tasked with recommending to council activities that could engage the public and garner their support.

An annual plan is also to be submitted to council for review.

“The premise is, if West Chester doesn’t take the lead, the R3 isn’t coming back here,” Scott said.

The current line the borough would link up to should service be restored is the Regional Rail Zone 3, or SEPTA’s Media/Elwyn line.

The transit authority has recently poured funding into extending the line 3.4 miles to Wawa.

According to the transportation history compiled by resident historian Jim Jones, railroads have existed in the borough since the 1830s after citizens organized to connect the small municipality with Philadelphia by forming the West Chester Railroad Company. Problems with the railroad and public response caused a number of changes to the rails throughout the years before the Media branch was electrified in 1928.

Operations continued throughout the 20th century, but declining ridership along with a fire destroying the freight and passenger station in 1967 forced the Pennsylvania Railroad to end service to the borough in 1986.

“The ability to put back a line is obviously very costly, very capital intensive,” said Byron Comati, director of strategic operations for SEPTA.

Comati said part of the concern is the investment SEPTA has already put into extending service to Wawa.

To restore service, Comati said there needs to be demand and ridership potential, something the West Chester line currently lacks according to their research.

Comati said all cost factors including design, road reconstruction and stabilization were taken out of the study to purely analyze demand.

“It was very helpful, but I was expecting slightly higher numbers,” Comati said, indicating the results were not compelling.

Reasons for the numbers are hard to project given the tests cannot read the customers’ minds, though Comati indicated the biggest factor is competition with the current Paoli/Thorndale line that includes service out of Exton.

“We put out a lot of service on that line,” he said, pointing to the number of tracks and available parking at Exton. “Exton is the largest station. We will continue to invest in those stations.”

Altogether, SEPTA’s future investments are tied to lines other than the R3.

“The problem with the Elwyn branch is it’s a very circuitous alignment,” Comati said. “It’s also a line that does not have high speed capability. You can’t do 70, 80 miles on the line so it will always be a slow route.”

Comati said the slow route is a turnoff for travelers. For what would take a rider 45 minutes to the city from the Exton station, may take two hours from West Chester, according to Comati.

Next week, the Chester County Planning Commission is set to unveil its transportation plan at a public meeting on Wednesday at Exton Library.

Randy Waltermyer, deputy director of the commission, said the plan is a look at the future of transportation in the county by establishing where members want to be in 2020, 2030 and 2040.

“It’s kind of our lens of where do we see transit at those three intervals,” Waltermyer said.

Waltermyer said the commission is not recommending service to be restored to West Chester at any of those intervals. That is in line with a study the commission put out in 2004 that identified the borough as a “low priority” compared to the Paoli R5 line expansion and the Schuylkill Valley Metro.

The new plan continues a focus on expanding lines to Coatesville and improvements that would stretch the line out to Atglen.

“The Keystone Line has always been our jewel in Chester County and we continue to try and polish that jewel as much as possible,” Waltermyer said. “We certainly don’t deny that there is a demand in the West Chester market, but we are responding by continuing to improve the Exton train station.”

Those improvements would include a new bus loop.

Waltermyer said he is enthusiastic about the plan and is excited to be working with SEPTA, which he said appears to now have more funding for improvements, changing the climate from the picture he got nine months ago.

Comati said SEPTA is working with the county and also sees the Paoli line as the site to develop because the dollars are not there for the West Chester line at this time.

To extend the 3.4 miles to Wawa, Comati said it is costing SEPTA more than $125 million. With West Chester further down on the line, he said that amount would triple fast.

SEPTA said it is committed to working with all communities in the five counties it serves, but it is always a challenge to find the best solution.

“If money wasn’t and object and ridership was a lot more compelling it’s a much more viable project,” Comati said. “But I’m not convinced it’s a project that is going to get advanced in the near future and needs more thinking.