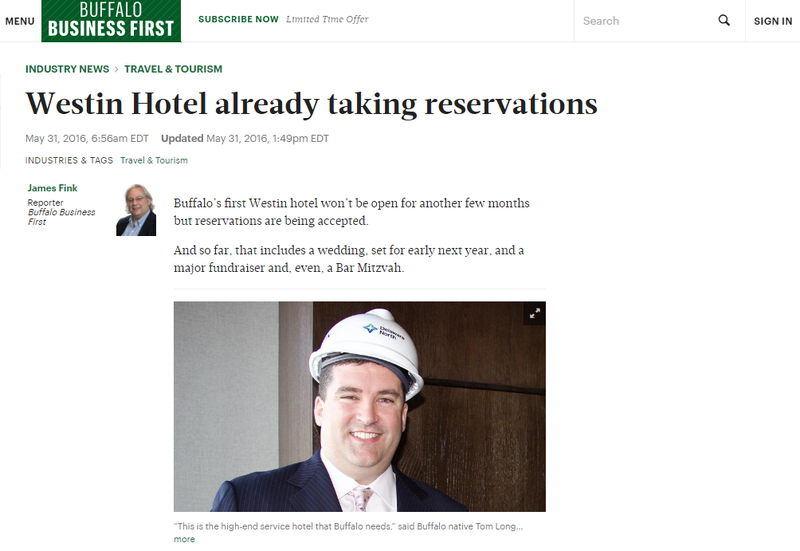 Buffalo’s first Westin hotel won’t be open for another few months but reservations are being accepted.

And so far, that includes a wedding, set for early next year, and a major fundraiser and, even, a Bar Mitzvah.

While construction crews are scurrying about the 116-rooom hotel, which will occupy five floors of Uniland Development Co.’s 250 Delaware Building, the local Westin team led by general manager Tom Long and Russ Papia, director of sales and marketing, are taking group reservations. Westin, which is part of the Starwood Hotels family, is only accepting individual bookings after Nov. 15 but that will change once the hotel has a firm opening date.

Long, the Buffalo native who Delaware North recruited from the Waldorf Astoria in New York, said the hotel is on target to open by late August.

Delaware North is developing the Westin and deliberately put the hotel in the same building where its corporate headquarters is located.

As for group bookings, it is across the board, Papia said.

“There is no specific niche,” Papia said.

The Westin’s arrival has been highly anticipated not only by the local hospitality industry but by corporations that were looking for a new, upscale hotel in the downtown core. It is one of several new hotels that have either opened or will soon open in the central business district.

“Everything is really coming together,” Long said.

A fifth floor model guest room has been completed. Work on other rooms, meeting spaces, the fitness center and Patina restaurant continue at a break neck pace.

For Long, a lot of decisions are being made. Some more obvious than others.

In recent days, he selected a walkie-talkie communication system for the hotel’s workers, fielded offers from dry cleaners and uniform companies and, even, had to select the style of bathrobes, slippers and bath towels that will grace each room.

“Most of it is truly behind-the-scenes stuff,” Long said. “But, I have to remember each decision I make effects our customers and how they view the hotel and our operations.”

The Bishop Timon High School and Florida International University graduate knows a lot of eyes are watching him and his staff. That doesn’t bother him.

“I wanted to be challenged,” Long said. “That’s just what I wanted.”

The Westin is loaded with amenities and high tech gadgets. It is fiber optic wired for state-of-the-art web and electronic access. Each room comes equipped with a 55-inch TV and designer furnishings.

The fitness center, that overlooks the corner of Chippewa Street and Delaware Avenue, will have all the latest cardio and training equipment.

Also overlooking the same Chippewa Street/Delaware Avenue intersection is a second floor 3,600-square-foot ballroom that depending on the configuration can handle up to 350 people. The ballroom is one of three indoor meeting rooms in the hotel plus an outdoor courtyard/meeting area just off of the lobby.

“We really wanted to bring what we call ‘the community of Buffalo’ into the hotel,” Long said. “This is the high-end service hotel that Buffalo needs.”