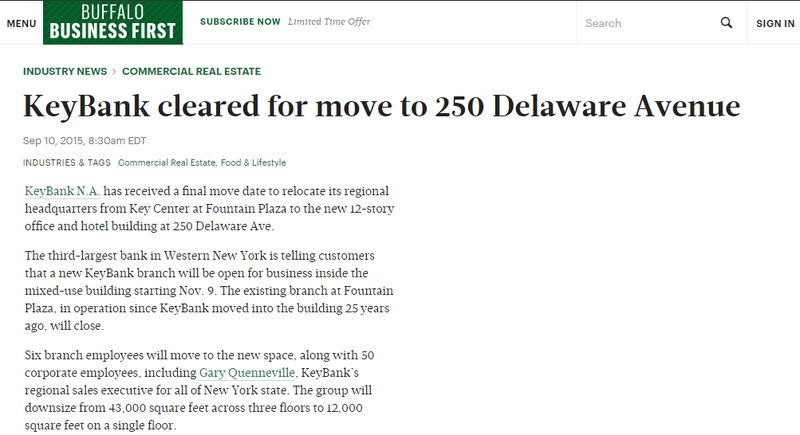 KeyBank N.A. has received a final move date to relocate its regional headquarters from Key Center at Fountain Plaza to the new 12-story office and hotel building at 250 Delaware Ave.

The third-largest bank in Western New York is telling customers that a new KeyBank branch will be open for business inside the mixed-use building starting Nov. 9. The existing branch at Fountain Plaza, in operation since KeyBank moved into the building 25 years ago, will close.

Six branch employees will move to the new space, along with 50 corporate employees, including Gary Quenneville, KeyBank’s regional sales executive for all of New York state. The group will downsize from 43,000 square feet across three floors to 12,000 square feet on a single floor.

In a letter dated Sept. 4, KeyBank told customers: “We value our relationship with you and want you to know that while this change relocates where your accounts are managed, we aren’t changing the way we work with you. We want you to feel welcome to bank with us the way you prefer, whether that is banking online at Key.com or via mobile, by contacting our call centers or by accessing our extensive ATM network.”

The notice comes four months after it was confirmed that construction of the building was behind schedule, due to rough winter weather and problems with the color of the glass panels on the building. Uniland Development Co. is constructing the tower, which will be anchored by Delaware North, the global hospitality company that is also relocating from Key Center.

Delaware North was initially set to move in August, but now expects to relocate next month.

In addition to office tenants, the $110 million 250 Delaware building will be home to a Westin hotel that’s slated to open next year.