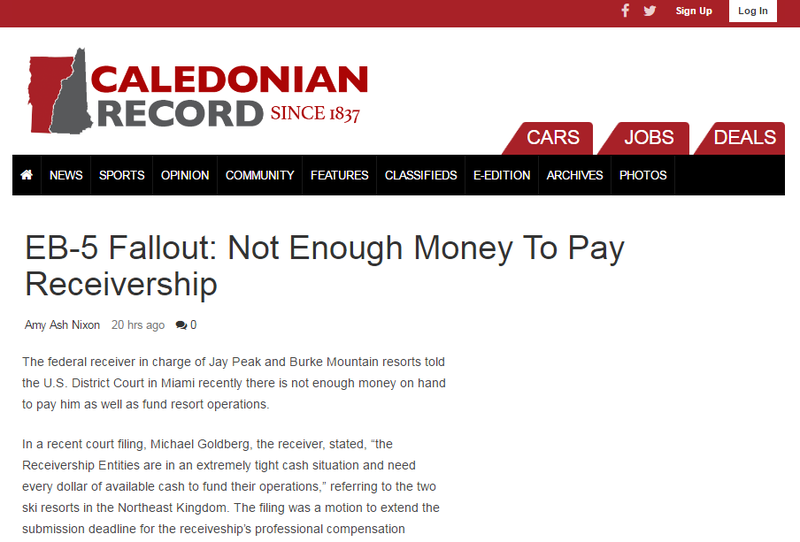 The federal receiver in charge of Jay Peak and Burke Mountain resorts told the U.S. District Court in Miami recently there is not enough money on hand to pay him as well as fund resort operations.

In a recent court filing, Michael Goldberg, the receiver, stated, “the Receivership Entities are in an extremely tight cash situation and need every dollar of available cash to fund their operations,” referring to the two ski resorts in the Northeast Kingdom. The filing was a motion to extend the submission deadline for the receiveship’s professional compensation applications with the federal court.

The federal receivership was put in place in mid-April after state and federal allegations were lodged against Ariel Quiros, the resorts’ principal owner, and general partner Bill Stenger.

The pair have been accused of a Ponzi-like scheme dating to 2008 in which more than $200 million of foreign investors’ capital has been misappropriated, according to authorities.

According to Goldberg’s motion to extend the deadline for receivership fees, “The Receiver and his professionals recognize the importance that all available cash be directed to fund the Receivership Entities’ operations in order for them to survive, and accordingly, have agreed to defer their request for fees until such time as the estate has sufficient cash to pay them.”

By filing the motion for extension, Goldberg told the court that will save the time and cost of those involved filing fee applications now “as such exercise would needlessly require professionals to incur additional expense at a time when the estate is unable to pay them.”

“The Receiver is hopeful that the estate will soon have some liquidity and that fee applications can be filed at that time,” Goldberg wrote.

Efforts to find out from Goldberg how much the professionals involved in the case might be owed for the first quarter of their services were not successful by press time on Thursday.

Under the Receivership Order issued April 13 by the U.S. District Court in Miami, where the federal Securities Exchange Commission case is based, Goldberg is authorized to employ legal counsel, accountants and other professionals as he deems necessary and to fix and pay their compensation as he deems reasonable to carry out the duties with which the receivership has been tasked.

The receivership has retained special litigation and conflicts counsel, general legal counsel, and forensic and general accountants, and has also retained Canadian counsel “to assist in recovering funds located in Canada,” according to the recent filing.

Goldberg’s filing was timed almost exactly at the end of the first quarter for which fees would have been payable to those professionals who have been working under the receivership umbrella.

“The Receiver has worked diligently to secure, maintain and preserve the value of the assets of the Receivership Entities,” wrote Goldberg. “This includes maintaining and operating the Jay Peak Resort, and maintaining the Burke Resort, which is scheduled to open shortly.”

He went on, “The timing of this receivership was not ideal from a cash flow perspective. More specifically, this receivership commenced at the very start of the off season. Typically, the Jay Peak Resort loses money in the off season. Thus, the Receiver has been forced to utilize the minimal funds left in the Receivership Entities’ bank accounts to supplement the Jay Peak’s losing operations and to maintain the Burke hotel.”

Further complicating the lack of cash, Goldberg explained, was an order from the State of Vermont in June “directing that the aerial tram which transports skiers to the top of the Jay Peak mountain be repaired and upgraded.”

“The tram is essential for the survival of Jay Peak Resort, and accordingly, the Receiver was forced to incur an additional approximate $5 million expense to repair it, further exasperating the Jay Peak Resort’s liquidity shortfall,” Goldberg continued.

He stated, “The results of these expenditures is that there are presently not sufficient funds to pay the Receiver’s professionals. There is no sense in expending additional costs to the receivership estate to prepare fee applications at this juncture. The Receiver hopes there will be sufficient funds in the near future garnered from settlements or the sale of receivership assets to compensate his professionals.”

Judge Gayles granted the motion to extend the time for the filings for fees in an order signed July 29.