Quiros Slams State’s Case Against Him 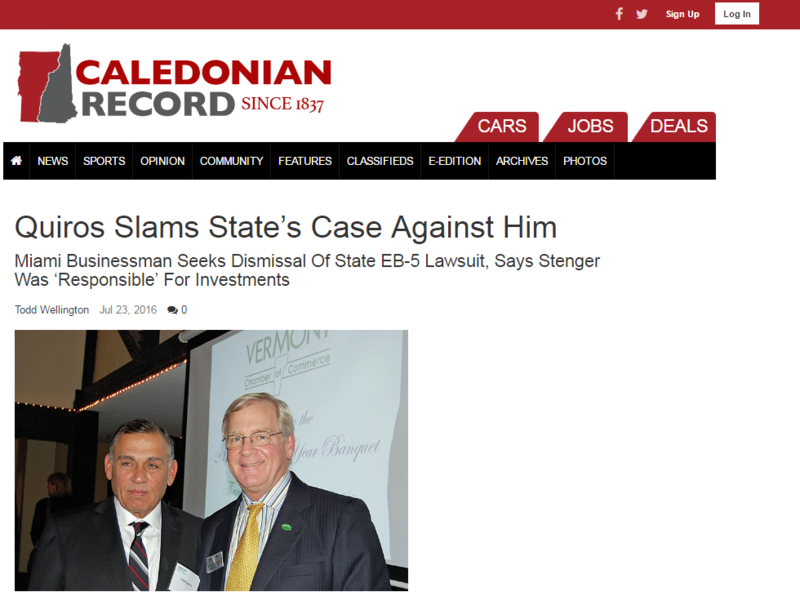 Ariel Quiros is hitting back.

The Miami businessman at the heart of the Jay Peal/Burke Mountain EB-5 scandal wants a lawsuit filed by the state of Vermont against him and his EB 5 partner Bill Stenger thrown out saying it lacks substance and is legally flawed.

Quiros and Stenger are both the subject of a federal complaint filed earlier this year by the Securities and Exchange Commission (SEC) alleging misuse of EB 5 investor funds used to develop Jay Peak, Burke Mountain and other Northeast Kingdom Properties.

The state of Vermont filed a similar complaint in Washington Superior Court.

Now Quiros has filed a motion to dismiss the state case through his attorney Ritchie E. Berger of Burlington.

“The state unveiled this lawsuit amidst great fanfare, casting it as a significant securities-enforcement case. It is not,” wrote Berger in his motion filed on July 1. “While the state’s characterization of the litigation may have made for good sound bites in the news the actual allegations of the complaint tell a very different and less sensational story.”

At issue in the state’s case are seven limited partnerships formed to finance commercial developments in the Northeast Kingdom through foreign investments under the federal government’s EB-5 immigration program. In his motion, Berger argues that even if the allegations against his client were true they amounted to “little more than grounds for a potential partnership dispute between private parties,” according to the motion.

“This is indisputably not a case of a fraudulent scheme built on illusory investment vehicles,” wrote Berger. “Of the seven partnership projects, five have been completely constructed and the remaining two were under development at the time of the State’s filing. The State’s primary accusation of wrongdoing against Ariel Quiros is simply that he failed to use investor funds in the manner described in the private placement memoranda for each limited partnership…This is not a case of defendants selling investors a false bill of goods and fleeing the country with pilfered funds.”

Berger also argued that there was no need for the state to get involved at all and that its lawsuit against Quiros was a “misguided enforcement action,” according to the report.

“The foreign investors in the partnerships at issue—all wealthy enough to stake the minimum $500,000 investment in an EB-5 Project—are entirely capable of enforcing their own rights against Quiros and the other defendants, as witnessed by the fact that more than one class action has been initiated since the state filed its complaint,” wrote Berger.

The motion also claims that it was not Quiros but Stenger who “was responsible for, and had authority over” the contents of each of the EB-5 Project investments.

Stenger is also named in the state lawsuit. A judge has granted his request that he have an extension of time to respond to the complaint.

Quiros is also seeking dismissal of the federal SEC complaint against him now pending in U.S. District Court in Miami, Florida.

In a motion to dismiss filed last month, his attorneys argue that the statute of limitations has run its course and that he did not personally handle the securities offerings to investors.

This week, Quiros’ motion seeking more time to file his reply in support of his motion to dismiss was granted in Miami, according to a document released on Wednesday.

The SEC did not oppose the federal court granting Quiros the extension from Aug. 12 to Aug. 26, according to the court record. Quiros has been given an extension until Aug. 26 to file his reply in support of his motion to dismiss the federal allegations he faces.

The SEC attorneys were also granted an extension to file their response to Quiros’ motion to dismiss, from July 26 until Aug. 2. Quiros did not opposed that motion.