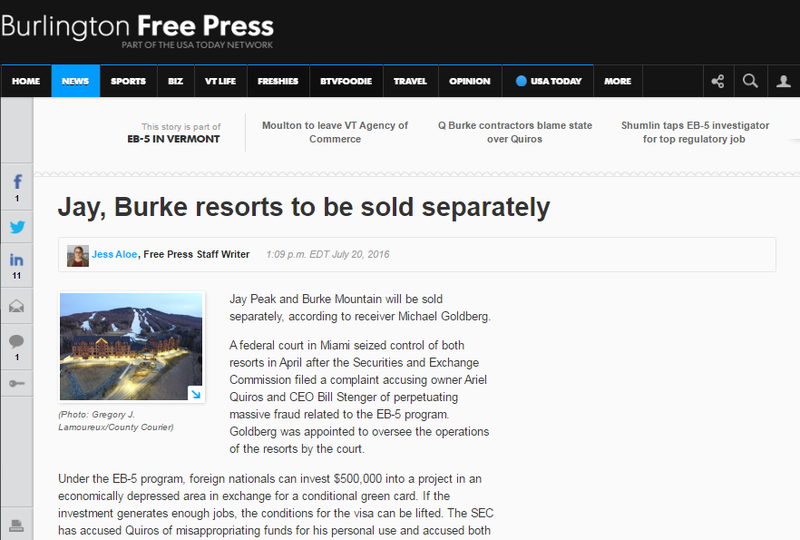 Jay Peak and Burke Mountain will be sold separately, according to receiver Michael Goldberg.

A federal court in Miami seized control of both resorts in April after the Securities and Exchange Commission filed a complaint accusing owner Ariel Quiros and CEO Bill Stenger of perpetuating massive fraud related to the EB-5 program. Goldberg was appointed to oversee the operations of the resorts by the court.

Under the EB-5 program, foreign nationals can invest $500,000 into a project in an economically depressed area in exchange for a conditional green card. If the investment generates enough jobs, the conditions for the visa can be lifted. The SEC has accused Quiros of misappropriating funds for his personal use and accused both Quiros and Stenger of using money raised for one project for a different project.

Burke Mountain is the higher priority sale, Goldberg said on Tuesday, though both resorts will eventually be sold. The subcontractors who built the resort are owed millions of dollars and, as Quiros' assets have been frozen, may not be paid until the resort has changed hands.

"I am working on other ways to attempt to get the contractors paid," Goldberg wrote in an email to the Burlington Free Press, although he declined to elaborate at this time.

Goldberg said that he and his team have not focused on the sale of Jay Peak yet and he is unsure of the total value of the resort. He said the resort will most likely be sold as a package at the right time, though not if he can get a higher price selling it in parts.

"We've been told that the current court proceedings underway most likely will take some time to reach a resolution," JJ Toland, the communications director for Jay Peak, said. "If Jay Peak were to be sold, we've been told it would be to a company that has extensive experience in running a resort such as ours."

Both Jay and Burke are currently being run by the Leisure Hotels and Resorts, a hospitality management group with experience managing properties in receivership. In the court filing requesting approval of Leisure Hotels and Resorts, a lawyer from Goldberg's firm wrote that the group is "one of the preeminent resort management companies in the country."

Parker Riehle, president of the Vermont Ski Areas, said he's been wondering about who will buy Burke and Jay. He said both resorts are remarkable, though he hasn't heard any rumors of potential buyers.

"All I do know is this process could take a while," Riehle said, based on conversations he's had with Leisure Hotels and Management.

Both resorts offer a lot to potential buyers, he said. Jay has the water park and the ice arena, among other new assets. He said he had recently seen the hotel at Burke, which plans to open this fall.

"I was just floored, it's incredible," he said.

Riehle said he wouldn't be surprised if offers for the resorts already existed, though he said he didn't expect the receiver to take the first offer on the table. 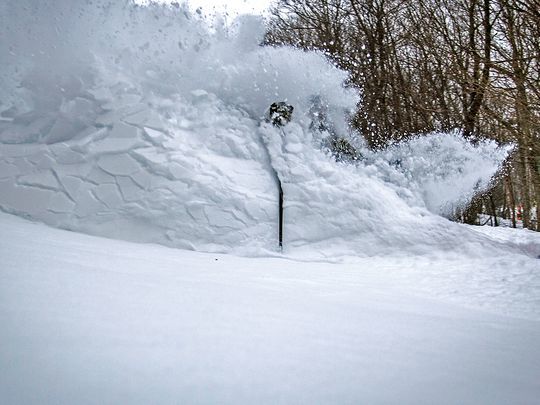 Skiers disappear into more than two feet of snow that buried sections of northern Vermont, creating what one called a "snorkel session" in 2014

There are few cases in history that provide some insight into what's ahead for Jay and Burke, but Riehle said the woes of Les Otten, the owner of the American Skiing Company that went bust in 2007, could provide an example of resorts that went through tough times and flourished.

Otten began buying resorts in 1980, but by the 2000s investors began to believe he had overleveraged the many resorts he owned. He owned, among other resorts, Killington, Sugarbush and Mount Snow in Vermont.

Mount Snow and Killington were bought by multistate mountain conglomerates, Missouri-based Peak Resorts and Utah-based Powdr. Both, Riehle said, have been enormously successful. Win Smith, the former Merrill Lynch executive and current chairman of the Vermont Business Roundtable, was the lead in a group of investors who bought Sugarbush in 2001.

If Jay and Burke are bought by groups that operate multiple mountains, it's likely they could be added on to multi-mountain passes.

"These things are big time sales leaders," Riehle said, since they allow skiers and snowboarders to visit more than one resort without having to purchase day tickets. Multi-mountain passes are a big draw in an era where the snow industry is focused on the challenge of keeping millennials on the snow.

"We have to engage and convert two millennials for every baby boomer who leaves," Riehle said, since millennials have less free time and spend less money.

Some watchers have said the ski industry is in trouble. According to data from the National Ski Areas Association, there were 470 ski areas in operation in 2014-15, down from 546 in 1991.  In Vermont, a warm winter and a lack of snow led to one of the state's worst ski seasons.

But while the receiver and courts may be looking at the long-term future, Jay Peak and Burke Mountain are focused day-to-day operations.

Burke is focused on making sure their mountain bike park and hotel are ready for their opening on Sept.1, said Jessica Sechler, Burke's marketing manager.

Toland, Jay Peak's director of communications, said customers should expect business as usual at the resort this winter. Season pass sales are about the same as they were this time last year, and sales of ski and ride lodging packages, including packages over holiday periods like Christmas, are up nearly 10 percent.

"Add in the fact that we're expanding our snowmaking coverage and we're looking at a very promising winter," he said.