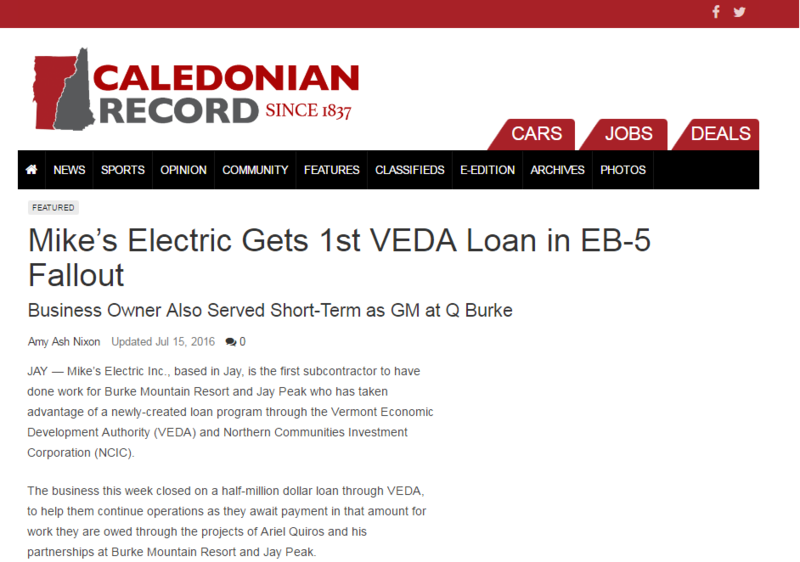 Mike’s Electric Inc., based in Jay, is the first subcontractor to have done work for Burke Mountain Resort and Jay Peak who has taken advantage of a newly-created loan program through the Vermont Economic Development Authority (VEDA) and Northern Communities Investment Corporation (NCIC).

The business this week closed on a half-million dollar loan through VEDA, to help them continue operations as they await payment in that amount for work they are owed through the projects of Ariel Quiros and his partnerships at Burke Mountain Resort and Jay Peak.

Mike Pappalardo, owner of MEI, was both a contractor for the resorts and had a long working relationship with the owners as an electrical contractor. Earlier this year, he was named general manager at what was formerly called Q Burke Mountain Resort, and has since lost its Q, since a fraud scandal was alleged in April.

Pappalardo was named the resort’s general manager by Ary Quiros Jr., and a short story about the position appeared in the Newport Daily Express.

He was in attendance at an April meeting of the Burke Select Board with Ary Quiros Jr., when the younger Quiros turned out to discuss with the board what was happening at the mountain, concerns over the new $50 million hotel and conference center not being opened yet as the general contractor, PeakCM would not release the certificate of occupancy and more.

A week after that meeting, federal and state authorities filed cases against Ariel Quiros Sr. and his partner Bill Stenger, alleging the pair had orchestrated an eight-year Ponzi-like scheme and had allegedly misappropriated more than $200 million; Quiros was further charged with skimming another $50-plus million of investor funds and using it for his lavish lifestyle, including the purchase of two New York City condos.

Stenger is not accused of as serious of allegations as is Quiros. Stenger is negotiating with the SEC for a settlement, while Quiros is fighting the case and seeking dismissal of the claims at both the state and federal level; his case is expected to go to trial in 2017.

Between 25 and 30 subcontractors in addition to two general contractors, are owed about $5 million from the projects, and liens have been filed against the properties. In the meantime, many of those smaller subcontractors are in need of funds to get through the summer construction season, explained Jo Bradley, CEO of VEDA.

When the newspaper first sought the details on the first loan recipient issued a loan this week, VEDA was reluctant to identify the business, other than to say they were located in the Northeast Kingdom.

The newspaper pressed for the disclosure of the name, and it was released later by VEDA.

Bradley said in an email after an earlier interview, that the loan to Mike’s Electric is for $500,000. She said, “The collateral is certain real estate owned by the buyer and the accounts receivable.”

Mike’s Electric, which goes by MEI Electrical Contractors and MEI Systems Integrators, has two liens filed with the Burke Town Clerk’s office, a mechanic’s lien in the amount of $491,972.60.

A second mechanic’s lien, filed June 6, came in for an additional $27,985.66 for work at Burke Resort, it states, including work to snowmaking equipment, lift inspection, and more; part of this latest lien includes finance charges in the amount of $945.96, dated April 28. One line item in the latest lien is for “human resource consulting,” in the amount of $12,375.

An additional sum listed in the second lien filed more recently states that Mike’s was hired to make repairs to the Burke snowmaking cables a $50,000 cost, and remains unpaid for that work, for which there is now an added $4,701.37 in finance charges.

There are photos on Mike’s Electric’s website showing projects at Jay and Burke, and under their testimonials section, the company notes, “Over the past few years Jay Peak Resort has been going through a multi-million dollar expansion that has been fueled by EB-5 investment money. MEI Electrical Contractors has been the local electrical subcontractor, working along with the general contractor DEW Construction, for the initial expansion with Bill Stenger, the President and Owner of Jay Peak Resort, overseeing construction.”

A quote from Stenger about their work states, “I am very pleased with MEI. They do outstanding work and their employees are from our community. It’s a terrific example of a business that hires people educated and trained in Vermont; we are happy we can employ the home team.”