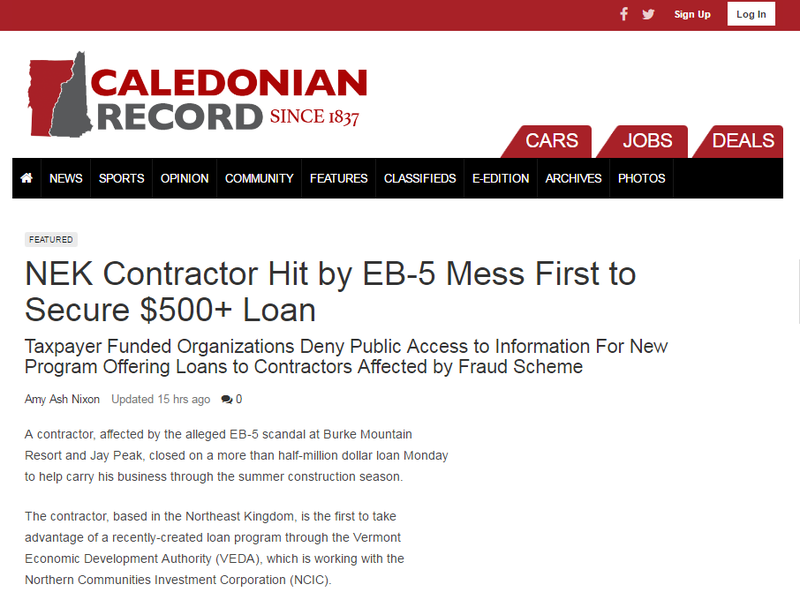 A contractor, affected by the alleged EB-5 scandal at Burke Mountain Resort and Jay Peak, closed on a more than half-million dollar loan Monday to help carry his business through the summer construction season.

The contractor, based in the Northeast Kingdom, is the first to take advantage of a recently-created loan program through the Vermont Economic Development Authority (VEDA), which is working with the Northern Communities Investment Corporation (NCIC).

The name of the business who obtained the loan was not released by VEDA or NCIC officials. Because both VEDA and NCIC are tax-funded organizations, it’s not clear under what open record exemption the organizations are withholding the public information.

According to Jo Bradley, CEO of VEDA, the contractor in question is a Northeast Kingdom business, and they worked on both the Burke Mountain and Jay Peak projects, which are both under federal oversight now.

“I think that it means that they’ll be able to keep people employed, that’s what I understand,” Bradley said. “I spoke with the owner today, and he’ll be able to continue to do the jobs that he’s got lined up, because it’s really for working capital, it’s to replace what they didn’t get paid for either Burke or Jay.”

A second application from a contractor hurt by the Jay Peak and Burke Mountain scandal was received by VEDA on Monday, said Bradley. He is hoping, as is NCIC, that more of the subcontractors hurt by the fraud case come forward and seek loans to buoy them until their liens against the properties can be turned into cash they are owed.

The loans are interest-only for one year and then are 4 percent, she said.

“We contacted all of them,” Bradley said of the several dozen subcontractors and the two general contractors for the projects in Burke and at Jay Peak. “I’m guessing it would be about 25 and 30.”

Jon Freeman, president of NCIC, said his agency is working with VEDA to help subcontractors who are owed money, in some cases a great deal. “I think it really does help them out. We have structured it so that they can continue to do business and handle a loan payment that’s within the cash flow and the full resolution would happen when the situation with the mountain is settled.”

Nearly $5 million remains owed to the general contractor on the Burke hotel, PeakCM, and myriad subcontractors working under him, as well as subcontractors on various projects at the Jay Peak resort and associated projects in the Newport area.

DEW, the general contractor at Jay Peak, is also still owed money from the projects there.

The majority owner of the two ski resorts, Ariel Quiros, and his partner, Bill Stenger, are both accused of misappropriating more than $200 million in immigrant investor funds in the EB-5 program, through which investors can earn green cards by putting a half-million dollars into economic development projects which create jobs.

Quiros is further charged with skimming off more than $50 million on top of that amount and is alleged to have used the funds to make possible his lavish lifestyle, including the purchase of two luxury New York City condos and more.

Stenger is in the midst of negotiations for a settlement with the Securities Exchange Commission and faces less serious charges and is not accused of taking any funds personally.

In April the Securities Exchange Commission and the Vermont Attorney General filed coordinated complaints alleging securities fraud and accusing Quiros and Stenger of carrying out a Ponzi-like scheme dating back to 2008.

The assets of the resorts, as well as other projects under the umbrella of the Northeast Kingdom Economic Development Initiative, are under federal receivership since the federal case was launched, and a U.S. District Court judge in Miami, Florida, brought in a federal receiver to right the ships at the resorts and work to protect the assets.

A number of subcontractors are left holding the bag for some of the debt associated with bills the ownership could no longer make good on, as are the contractor for the new hotel and conference center at Burke Mountain Resort, PeakCM, who is still owed just short of $4 million.

There are liens against the properties by a number of subcontractors and the general contractor, as well. Some of what PeakCM is owed includes subcontractors for the Burke project, Jerry Davis, president of PeakCM said earlier.

Pat Moulton, secretary of the Vermont Agency of Commerce and Community Development, said Monday that only one contractor has so far sought a loan, as confirmed by Freeman.