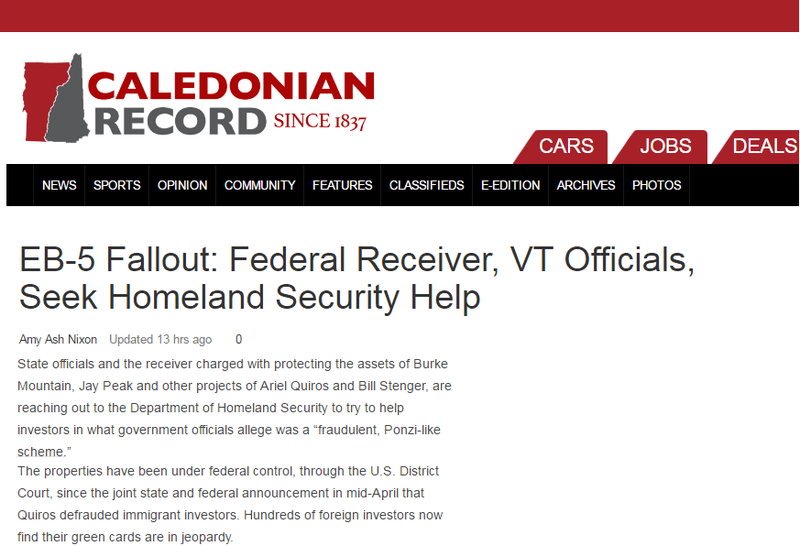 State officials and the receiver charged with protecting the assets of Burke Mountain, Jay Peak and other projects of Ariel Quiros and Bill Stenger, are reaching out to the Department of Homeland Security to try to help investors in what government officials allege was a “fraudulent, Ponzi-like scheme.”

The properties have been under federal control, through the U.S. District Court, since the joint state and federal announcement in mid-April that Quiros defrauded immigrant investors. Hundreds of foreign investors now find their green cards are in jeopardy.

The EB-5 projects relied on funding from immigrant investors at $500,000 apiece to build what the resorts’ owner, Ariel Quiros and his partner, Bill Stenger, called the Northeast Kindom Economic Development Initiative - an ambitious series of developments. They promised to transform a struggling region into one flush with new jobs.

Instead, the pair is accused by federal and state officials - after a 3-year probe - of misappropriating more than $200 million in investor funds. Quiros is further accused of skimming more than $50 million for personal use, including buying two luxury condos in New York City.

In a joint letter sent late last week by the Vermont Agency of Commerce and Community Development, the State of Vermont EB-5 Regional Center, and Michael Goldberg, the receiver of Jay Peak Resort and Related Projects, the parties urge Jeh Johnson, Secretary of Homeland Security in Washington, D.C., to step into the situation and help to protect the hundreds of investors who face deportation because of the fraud.

The parties, in the June 30 letter, urge the Homeland Security department to take an active role “…in resolving a matter of national interest and equitable treatment for immigrant EB-5 investors facing deportation in the alleged Jay Peak fraud case.”

The request is accompanied with information about the separate, but related complaints the SEC brought in U.S. District Court in Miami, Florida in April, and the Vermont Attorney General brought in Washington Superior Court in Barre.

“The complaints allege that the defendants organized and executed an eight-year-long fraudulent scheme in which more than $55 million in funds raised from some 700 investors through the U.S. Citizenship and Immigration Services’s EB-5 Immigrant Investor Program was systematically stolen. The further allegations are the general partners misused approximately $200 million of the more than $350 million raised from investors in the eight limited partnership offerings connected to the Jay Peak ski resort.”

State of Vermont officials in late May had written to the chief of the Immigrant Investor Program within the U.S. Citizen and Immigration Services Program Office, but have not had response, the recent communication states.

“Importantly, these victims are completely innocent of any wrongdoing and have fully attempted to comply with the law, yet they are in jeopardy of being further victimized by the inaction of the United States Citizen and Immigration Services,” the correspondence states. “Our outreach to work with USCIS is solely motivated by our strong desire to resolve issues for the benefit of the investors, Vermont jobs, and the EB-5 program generally.”

Efforts to reach Goldberg, and Patricia Moulton, secretary of the Vermont Agency of Commerce and Community Development, were not successful by press time on Wednesday.