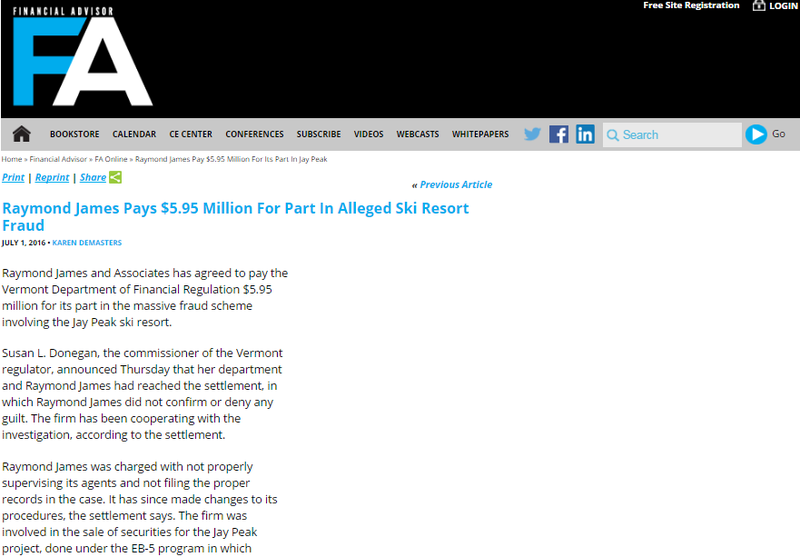 Raymond James and Associates has agreed to pay the Vermont Department of Financial Regulation $5.95 million for its part in the massive fraud scheme involving the Jay Peak ski resort.

Susan L. Donegan, the commissioner of the Vermont regulator, announced Thursday that her department and Raymond James had reached the settlement, in which Raymond James did not confirm or deny any guilt. The firm has been cooperating with the investigation, according to the settlement.

Raymond James was charged with not properly supervising its agents and not filing the proper records in the case. It has since made changes to its procedures, the settlement says. The firm was involved in the sale of securities for the Jay Peak project, done under the EB-5 program in which foreign investors become eligible for U.S. visas by making large investments in projects in the United States in order to spur job creation.

Most of the money will go to reimburse investors, and Vermont will receive $1.45 million in penalties and for the expenses of the investigation, the settlement says.

The settlement is a small part of an ongoing investigation into the Jay Peak project that spanned eight years, involves hundreds of foreign investors and up to $350 million in investment money. The Securities and Exchange Commission has charged the operators of the scheme and seven limited partnerships with looting $50 million of the $350 million raised.

Ariel Quiros, the owner of Miami-based Q Resorts Inc., which in turn owns Jay Peak, and William Stenger, president and CEO of Jay Peak, along with Q Resorts and numerous other limited partnerships have been charged with fraud by the SEC.

Donegan is quoted in Vermont Business Magazine as saying she is pleased to see this settlement because it recovers some of the EB-5 investors’ money.

Her agency’s responsibility “is to ensure that Vermont’s securities laws are followed, and that investors are protected,” she said. “Since the SEC’s seizure of the Jay Peak-related EB-5 projects, investors have been rightly concerned about possible recovery of funds. This settlement contributes to their restitution.”