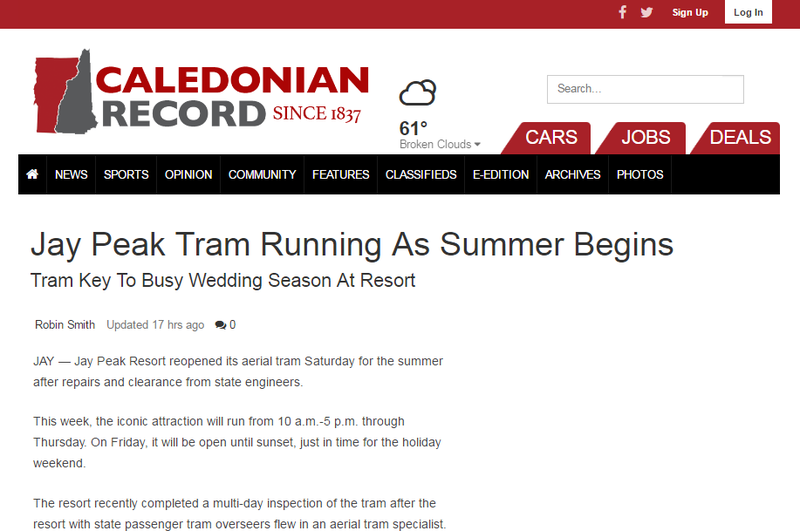 Jay Peak Resort reopened its aerial tram Saturday for the summer after repairs and clearance from state engineers.

This week, the iconic attraction will run from 10 a.m.-5 p.m. through Thursday. On Friday, it will be open until sunset, just in time for the holiday weekend.

The resort recently completed a multi-day inspection of the tram after the resort with state passenger tram overseers flew in an aerial tram specialist.

Inspectors conducted a successful load test designed to ensure that all of the conveyance’s electrical, hauling and braking systems functioned normally under strenuous conditions. After passing the load test, resort personnel successfully completed and passed an evacuation drill. The team also inspected the tram’s towers and its bolting structures. All were found to be operating normally, officials said.

On the last day of the inspection, inspectors found a hairline crack to one of the components of one of the tram carriages. That part was removed and replaced this past week. State officials certified the tram as operational on Friday.

“Our lift maintenance team’s efforts, along with the rigor and responsiveness of the state’s inspectors, allowed the process to move efficiently and get the tram open in June, which historically has been our goal.

“Plus, it was nice to have the tram open when the Porsche Club of America was at the resort,” Wright said.

The resort recently signed a $5 million contract with the Doppelmayr/Garaventa Group to conduct custom upgrades to the tram. The Austrian-based company will begin fabricating the enhancements shortly as the improvements are all customized and will take approximately 12 months to complete. Installation of the upgrades will begin in the spring of 2017.

The opening of the Jay Peak tram acts as a capstone to one of the busiest summer weeks in the resort’s 59-year history, officials said, as the resort completed a 10-day Porsche Parade 2016 convention on Saturday.

“Even with close to 2,000 attendees the Jay Peak Resort staff didn’t even flinch. The combination of breathtaking views, curvy roads and service with a smile made for an unforgettable event.”

The parade represents the largest piece of single-group business in the resort’s history.

Jay Peak even removed the ice from the ice arena for the PCA headquarters and evening parties.

Wright said the resort will play host to the busiest wedding destination events of the resort’s history as well this summer.

All the activity is a boon to the resort, which came off a poor ski season, like the rest of New England this season.

Jay Peak is also dealing with the fallout from a EB-5 scandal, where the owners Bill Stenger and Ariel Quiros are facing lawsuits from the U.S. Securities and Exchange Commission over misuse of $200 million in EB-5 foreign investments in the building of expansion projects at Jay Peak, Burke Mountain resorts and two Newport City projects that were not completed.

The U.S. District Court in Southern Florida, where Quiros also faces fraud charges for taking $50 million, has appointed a receiver to control the properties. The receiver named a resort management company to operate Jay Peak and Burke Mountain, which promoted Wright as general manager and is operating the resorts in advance of selling them to recoup money for investors, creditors and contractors.